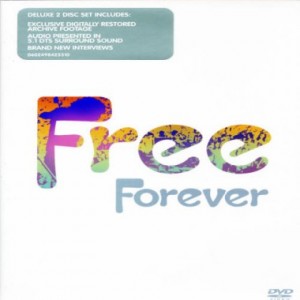 Let me first say that this DVD should be required viewing for any fan of classic rock. Though Free‘s existence was short-lived, the legacy of Paul Rodgers, Andy Fraser, Paul Kossoff and Simon Kirke is alive and well nearly 40 years on.

The very thing that used to make or break a band – a radio single – can also spin the greatest songs into the grave. I don’t know how many times I’ve heard Free’s biggest hit, “All Right Now,” but I grew weary of it long ago. Watching the band perform it in their prime, while the song was still fresh and gaining popularity, helped me reconnect and appreciate it. Kossoff’s bare-bones riff fleshed out with Fraser’s brilliant use of bass harmonics is rock at its most primal and anthemic. And that’s where Free excelled.

What jumps out immediately is the attitude and power of these four. The July 1970 performance for Grenada TV is a monster and worth the price of the DVDs alone. Of the five songs – “Ride On Pony,” “Mr. Big,” “Songs Of Yesterday,” “I’ll Be Creepin’” and “All Right Now” – it’s “Mr. Big” that blows up the stage. Kirke starts it off, pounding out a snare-bass drum/hi-hat groove at a snail’s pace. Kossoff then enters, with a skeletal three-notes-and-a-chord riff that’s blues-y and sleazy. Finally, Fraser pops in with his bass, alternating between single notes and those long, rubbery slides that made him the Jaco Pastorius of the rock world. (Did Fraser ever play a bum note?) On top of it all is Rodgers’ incomparable voice, soaked in blues and mature beyond reasoning for a 20-year-old. From the barest threads, Free take “Mr. Big” and build it into a roaring storm. Kossoff turns the tune on top of itself, playing a pattern of cascading arpeggios, while Fraser rocks back and forth, fingers running across his Fender as Kirke smashes out the rhythm. It’s an absolutely stunning performance.

Along with the performance footage, the DVD is studded with interviews past and present. Get the  scoop on how “All Right Now” was composed, through the accounts of Rodgers, Fraser and Kirke. Fascinating, and now with 5.1 surround sound. A must-see and hear for Free fans and those wondering what all the fuss was about. You’ll now know.