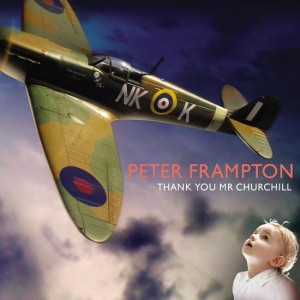 Peter Frampton‘s reputation as a guitar player has sometimes overshadowed his strength as a songwriter, and I find it curious. Frampton was never a guitar god the likes of a Ritchie Blackmore, Jimi Hendrix or John McLaughlin – players who inspired awe with their fierce attack, pyrotechnics and virtuosity. Instead, Frampton let his guitar serve his songs, which if you revisit his earlier albums such as Frampton and Frampton’s Camel, you’ll find LPs brimming with energy, freshness and melodic 6-six string work that seem to lift each tune with individual buoyancy. There’s aggressive and rocky riffs, sure, but there’s also a grace and litheness to the playing that makes it sound effortless. That same musicality and songcraft has seemingly transcended time to make Frampton’s latest album, Thank You Mr Churchill, among his best. It also has an old-school sound and vibe, thanks in part to producer Chris Kimsey, the engineer behind Wind Of Change, Frampton’s first solo album decades ago.

Frampton’s vocal phrasing rarely gets mention, but it’s what makes the contemplative title track even more compelling. The words are sung like a conversation, with Frampton paying thanks to Winston Churchill and the World War II allies who made it possible for his father to return home and, along with his mother, give Peter the gift of life. That candor carries over on the nostalgic “Vaudeville Nanna And The Banjolele,” where memories of a first guitar and realizations of parents as real people are delivered with emotion in that trademark voice, equally sweet and frail. “Solution” is classic Frampton, full of broad, swirling chords that connect to a beefy bridge and a solo that flies sky high. More guitar highlights follow on “Asleep At The Wheel,” where Frampton peels off a solo that vibrates and emanates with flurries of notes and feedback. “Suite Liberte” begins with a tropical vibe, on a far-flung Caribbean isle where Santo & Johnny meet Antonio Carlos Jobim. Frampton lulls us with a guitar line that blows like a soft afternoon breeze; midway, the mood changes to a stair-stepping jazz-blues that sounds like a cross between Jeff Beck and Johnny Winter. “Black Ice” is a metaphorical skate through Frampton’s battle for sobriety and finally reaching it, a journey journey that left him bruised but not beaten. At 60 years of age, Frampton is 30-plus years removed from the height of his commercial success, but as he notes, “I’ve realized success isn’t what you think, it’s what I think. Until I drop, I’ll still be trying to make myself a better person and that’s how I do it, through my music.”

Maybe best of all is how this excellent album is served: Thank You Mr Churchill is available on CD, high-resolution 24-bit/96kHz digital download and vinyl. Yes, vinyl! Thank you, Mr. Frampton.

One thought on “Peter Frampton – Thank You Mr Churchill”