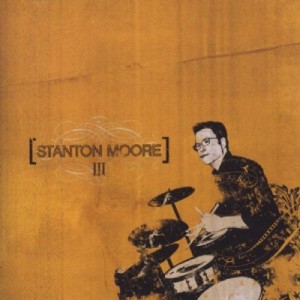 Do you consider funk to be a subset of jazz or of rock?  If you’re Metairie, Louisiana’s Stanton Moore, funk is equal parts of both jazz and rock.  The drummer from the New Orleans funk outfit, Galactic, Moore has also loaned his talents to a wide variety of studio and live projects, from the changing incarnations of collaborative efforts by other New Orleans-based musicians to his guest stint with heavy metal veterans Corrosion Of Conformity, on their 2005 release In The Arms Of God.  Moore is also an award winning creator of various instructional materials on the art of New Orleans style drumming.  With his 2006 release on the incredible Telarc label, III, Moore put down some amazing funk with a trio comprising himself, Hammond B3 organist Robert Walter and guitarist Will Bernard that blows my mind as much today as when it was first issued.  The record is not easily categorized, except to say that it’s one of the best modern day funk recordings, whether leaning towards the rockier side of the street or down jazz alley.

Seeing an opportunity, in the wake of Hurricane Katrina, to spend some time amidst the phenomenal acoustics of Preservation Hall, Moore set up shop and let the tape roll.  The result was ten songs, primarily composed by Walter, ending with a trilogy serving as a statement on the effects of Katrina on local residents and visiting musicians.  If you’re a fan of the Hammond B3 sound, you’ll really groove to this CD.  Walter steps to the fore, with Moore anchoring an irrepressible backbeat, on cuts such as “Licorice,” which has Walter leading off on the piece and just running wild throughout.  Bernard is given room to bust loose on his own greasy solo, which seems all the more effortless atop Moore’s rhythm.  The group is joined by guests Skerik on tenor sax and trombonist Mark Mullins, but they’re held to playing the cues and prevented from soloing on this particular track.

Walter’s composition “Big ‘Uns Get The Ball Rolling” contains some brilliant measures where the rhythm drops out to let Walter solo before jumping back in.  When Bernard chimes in with his undistorted solo break, he’s channeling funk’s heyday sound of the 1970s and having a blast doing so.  Moore also has some longer moments where his bandmates let him show us how it’s done.  He moves back and forth between simplified riff fills to lightning speed blasts using his entire kit.  On the Mullins tune “Chilcock,” the horns are appropriately right out front; the pace is slower, the sound meatier.  Freed from the need to take the lead as much, Walter conjures up some noises on his B3 that demand we pay closer attention to what’s going on in the background.  Skerik’s soloing is typical of his wild and free flowing style, while Mullins’ fat sound lends the Big Easy authenticity that the project needed.

Shift on over to Walter’s “Maple Plank” for a jazzier take on things, but this is more jazz a la Steely Dan or perhaps the Allman Brothers.  This is especially true when Bernard starts in with the slide guitar and we’re reminded that New Orleans is a town not just on the Gulf Of Mexico, but also in the U.S. Deep South.  He’s delivering country and soul licks while showing how much influence Dickie Betts has had on our fine Southern guitarists over the years.  The few phrases where Bernard multi-tracks himself to add harmonies are the only clue you’ll need as to whom he’s paying tribute.

The closing trilogy, more like an elegy in three movements, is also impressive, but not for the funk explosions on the rest of III.  The pace is slow and the feeling is melancholy.  Beginning with Abdullah Ibrahim’s “Water From An Ancient Well”, Bernard is again employing his slide bar and trading solos with Mullins.  The main melody is carried by Bernard, Mullins, Skerik, and Walter in unison.  Moore meanwhile is playing a syncopated Caribbean beat and leaning heavily on his crash cymbal with rolls to close out each phrase.  This song drifts into the group’s take on the Led Zeppelin tune “When The Levee Breaks,” and the mood turns dark and menacing.  Moore chooses not to appropriate John Bonham’s metronome-perfect metal take, but instead sounds as if he’s following a funky funeral march.  His snare is all about the drum rolls, but his bass drum is referencing Bonzo.  Bernard is again using his slide, while Walter’s B3 sounds more like he’s playing to a church congregation than in the way that John Paul Jones played the part.  The record then closes with the traditional piece, “I Shall Not Be Moved” and we feel as if we’ve actually stepped into a cathedral rather than a music hall.  This version contains both the sadness and defiance exhibited by the residents of New Orleans as they made hard choices about rebuilding what they’ve lost and restoring the historical charms of their city.  It’s the record’s shortest cut, at three minutes, but it may also be the song that says the most.

Despite Moore’s impressive catalog of work, he’s a relatively young man – just turning 40 in a couple of months.  By jazz and blues musician standards, he’s just a baby.  That’s good news for you and me.  We can definitely look forward to more excellent turns from him in the future, but don’t let the spellbinding gem III slip past you while we wait for what’s to come.