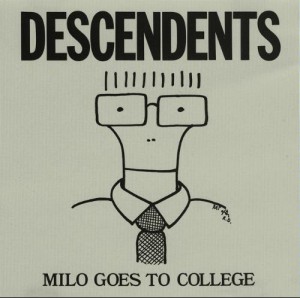 Manhattan Beach, California sponsored its own representatives in the hardcore punk explosion at the dawn of the ‘80s with its support of Descendents.  This year we celebrate the 30th anniversary of that band’s debut LP, Milo Goes To College.  While I’ve always been a big fan of this group, I’m struck by a couple of startling revelations upon review of the record.  You see, I came late to the party for this band, like so many others, and I wasn’t exposed to their music until the group reunited in the mid-80s.  So Milo Goes To College remains one of the most influential punk releases in history, but I’m first hearing some of the songs well after their conception and I’m also reevaluating some of my views on modern American social history as a result.

Descendents couldn’t be more matter of fact by naming their album Milo Goes To College because that’s exactly what was happening.  Lead singer Milo Aukerman was indeed heading off to begin the studies that would later grant him a PhD in Biochemistry.  The future of Descendents was looking rather bleak, but they intended to go out with a bang.  College contains 15 songs and wraps up in just over 22 minutes.  This was rather normal back in the day as bands dove right in, screamed about some things they hated, shattered a few ear drums, and ended the lesson before most had fully grasped what it was.  No beating around the bush – a quick set and you’re out.

Originally released on the New Alliance label and then reissued by SST Records upon their acquisition of New Alliance in 1987, College features the production talents of Spot, who was also responsible for so many other seminal releases by SST affiliated bands such as Black Flag, Hüsker Dü, Minutemen and Meat Puppets.  Spot’s work has been criticized over the years, but we can’t deny that he had a knack for capturing the urgency of the scene with his simplified methods and crispness of sound.  The drums rattle, the guitars sting, the bass rumbles, and the singer is right in our faces.  More complicated production was completely unnecessary.

The two mainstays in Descendents have always been vocalist Aukerman and drummer Bill Stevenson.  The sound of the band would not be the same without these participants.  Aukerman with his ability to sound wounded or annoyed while also carrying a melody, and Stevenson who can make any song sound as if it’s going twice as fast as it actually is by employing a style that’s inhumanly quick and precise, have welcomed a handful of different guitarists and bassists throughout the band’s tenure.  None of these string pluckers had altered the basic sound of the band, but the marks to match were set by bassist Tony Lombardo and guitarist Frank Navetta.  Lombardo’s talent at carrying a song’s main melody and Navetta’s ability to use his riffs to add power to the band’s forceful impact would be adopted by all subsequent players of their instruments which passed through the group.

Now comes the shocker, for me at least.  That homophobic language was much more accepted in every day conversation 30 years ago is not lost on me.  I can’t say I’m proud of my speech and actions and that of my peers during this less enlightened age, but I’m more than a little alarmed at how widespread the acceptance of such language was in 1982.  My first exposure to punk rock was The Angry Samoans’ Back From Samoa – not exactly a pinnacle in political correctness, yet from the same time period and geographical location as College.  But to hear lines such as “You fucking homo” and “You don’t belong here/Go away you fucking gay” in the tune “I’m Not A Loser” on College makes me realize that young people in Southern California were about as rampantly homophobic as they were in the Upper Midwest.  The song isn’t even about someone that’s gay, it’s about Milo railing against kids that have significantly more than he does and yet still complain when things don’t go quite their way.  The anti-gay words are meant as generic insults rather than a critique of someone’s sexuality.  Thankfully use of such lyrics diminishes with each addition to Descendents’ catalog, but their inclusion on College now remains a black mark that’s impossible to ignore.

Criticism was not reserved for the well to do and same sex relationships, however.  Descendents also tackled the military with “M 16,” commenting that, to them, “democracy” and money were worth more than human life.  In just under a minute of darkened surf rock, a la Dead Kennedys, they’ve made their point.  They take a similar stance, and twice as much time, to describe their confusion over the reverence towards the “Statue Of Liberty.”  The political commentary may not be what it seems here, however, as Aukerman’s frustration is not just towards the importance given to an inanimate object, but that no one visiting the monument bothers to question exactly why the towering lady arrived on our shores in the first place.  Blind obedience is the true cause of his complaint on both songs.

Failed or failing relationships have always been a lyrical concern for Descendents, as best exhibited on College’s “Hope.”  The insecurities dredged up through broken hearts are comparable to conflicts of global importance to this band.  By using “love song” words, the band set a stage for more pop-leaning punk ensembles decades later, such as Blink 182 or Fallout Boy.  Unfortunately, the younger generation may be more apt to believe those lesser combos had invented the style rather than stealing liberally from Descendents and their ilk.

Descendents were also critical of those who seek refuge from their daily worries through chemical stimulation.  A good example would be “Bikeage,” with lyrics such as “And when you’re on the streets/With a needle in your arm/Selling your body for another fix/Who’s gonna pick you up and take you home with them?/Not me!”  The song begins with a one-two guitar-bass set-up that could have been lifted from an R.E.M. practice session, but quickly plunges into the high speed delivery that we’re used to by now.  What the song has to do with a bike is never really clear.  This leads into another thing worth noting – an inside joke that has persisted throughout the band’s history.  Just take the one word that best sums up the subject of the song and slap an “-age” on the end of it to come up with the song’s title.  So College brings us not only “Bikeage,” but “Myage” and “Tonyage” as well.  A useful tool, this “-age” suffix.  Use it yourself, I do!

Milo Goes To College is a well-loved release to fans of classic, old-school hardcore punk, despite the politically incorrect sentiments.  No collection of this genre would be complete without its inclusion, so I’m glad that I finally rectified its absence from mine.  Just keep in mind that the world was a very different place back then, and possibly not how we remember it to have been.  Rather than just a means for musical revolution, punk rock was also a lot of fun.  It would have been an entirely different landscape had groups such as Descendents not interjected some humor and hooks into an increasingly brutal scene of “heavier than thou” competitions.  Milo went to college and grew up – nearing 50, two kids, works for DuPont when not reuniting with his bandmates for occasional albums and brief tours.  A lot of us walked similar roads, though not exactly the same, but we’re all bound by the appreciation of the power and freedom of expression found on this silly little record and those that followed.  Thirty years!  Wow!  What’s next?  Old age-age?