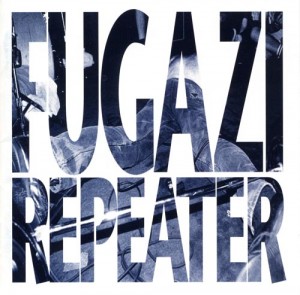 What’s the most important release of the 1990s that you haven’t heard?  Depending on who you’re talking to, the answer may be the debut full length release from Washington DC’s Fugazi, titled Repeater.  Released independently through guitarist/vocalist Ian MacKaye’s label Dischord Records in April of 1990, Repeater is alternately cherished or hated by fans of hardcore punk rock.  The reason?  MacKaye had previously been the front man for DC hardcore unit Minor Threat, and his venture out beyond the constraints of that genre saw him equally applauded and reviled by those familiar with his prior work.  The fans were those who similarly saw that hardcore punk doesn’t typically encourage experimentation.  The haters saw the same thing, but wanted their hero to continue championing hardcore and saw Fugazi as a sellout.  Those that followed MacKaye’s urge to branch out were treated to something rather different yet still rooted in punk traditions.

So what’s this review doing on classicrockmusicblog.com?  Bear with me; I’ve got some ‘splainin’ to do.  Most of you are fans of great guitar music, and on that front Fugazi will amaze you.  Many of you are also fans of the heavy stuff – metal and hard rock and such – and Fugazi were able to crank up the volume without having their songs blur past at breakneck speed.  While they emerged from the hardcore scene, the music cannot be considered punk in any way.  Further, some of you, like me, are self-styled music historians.  If you’re cataloging the important works of recorded music that have left an indelible imprint on musicians that followed, Repeater absolutely must be included on your list.  More than Nirvana‘s Nevermind, and more than Pearl Jam‘s Ten, Repeater charted a course out past the buoys flagging just how far a band could take their sound while remaining true to the style favored by their fan base.  The ground covered by Fugazi became influential on so many kids that were in bands and looking to create something identifiable as their own that we’ll probably continue to feel that influence for the next few decades.

Kicking off the set is a song that begins less than furiously and builds in intensity over the course of 4 minutes, “Turnover.”  MacKaye maintains control of his guitar’s volume knob while delivering long tones that turn out to be the chord changes for the song’s verses.  Drummer Brendan Canty and bassist Joe Lally contribute a steady, uncomplicated bottom end before guitarist Guy Picciotto slices through the still with higher register tones and greater volume.  The band follows suit and lays a base for MacKaye’s voice to caution us to the rigors of the day and the price for not facing them.  MacKaye isn’t so much of a singer, but he’s not really a shouter either.  Imagine Bon Scott reciting his lyrics without adding melody and you get the idea.

“Turnover” flows right into the album’s title track and some fine machine noise squeals courtesy of Picciotto.  The pace is quicker and MacKaye’s words more urgent as he simultaneously delivers comment on being absorbed into consumer culture and growing insensitive to the violence present in the nation’s decaying urban canyons.  Shock at aggression is a central notion to MacKaye’s worldview.  Even the name Fugazi (Vietnam-era soldier slang for fucked up-got ambushed-zipped in (to a body bag)) reveals the singer’s inner fears.

“Merchandise” contains many of the elements for which Fugazi became famous.  From the quickly-picked guitar opening to the insanely tight rhythm section to MacKaye’s revisiting his rant against how consumerism creates confusion over ownership.  As an artist in complete control of his band’s products on both the creative and business levels, MacKaye takes issue with the expectations of both the brokers (business owners) and the clientele collecting the products.  One line, “What could a businessman ever want more/Than to have us sucking in his store” appropriately sums up MacKaye’s feelings on how creators are required to whore themselves out in order to make a living.  “You are not what you own” – words to live by.

“Two Beats Off” is also a superb showcase for how two guitarists can complement each other to develop a signature sound much greater than the sum of its parts.  With a buzzy tone, which alone feels like a conflict waiting to be resolved, MacKaye sets up a very metallic groove over which to chant.  Colossal power chords push the tune to new levels, but the song is evidence of the importance of a solid rhythm section adding framework to the guitarists’ crafting of unconventional and tight melodies.  There are a lot of interesting directions taken in under 3 ½ minutes – also a hallmark of Fugazi’s approach.

The record’s finest moments are found on “Styrofoam.”  As a guitarist’s fantasy, the song delivers impossibly fast picking, slicing pick scrapes, and a balance to the bass line that neither copies nor places itself in opposition.  If there was any doubt that the musicians were simply too talented to keep with conventional meat-rock hardcore, here’s the convincer.  MacKaye’s lyrics discuss how we are all bigots, releasing our poison slowly over time like Styrofoam in a landfill.  Heady stuff drawn straight from the mind of a do-it-yourself innovator on the fringes of society!

The + 3 Songs part of the CD are really just that – more tunes tacked on to the CD reissue of the original.  While none of them are spectacular, why wouldn’t you opt for this version if it costs the same as the one with fewer tracks?  That’s what I was thinking, anyway.

To be properly respected, Repeater must be enjoyed while placed in the proper perspective.  It hit the shelves BEFORE the alternative music boom of the mid-90s and presented itself as a pure artistic statement from a veteran of the mosh pit wars.  Timing is everything, and Fugazi both lucked into not being lumped in with the glut of what was to follow and simultaneously met the ears of music fans who wouldn’t have paid notice to music as scary and brutal as hardcore has been perceived to that point.  Fugazi has been on an “indefinite hiatus” since 2003, claiming that money will not be the force that reunites them.  They’ve expressed a need to deliver a record that tops their 2001 release, The Argument.  That being said, Fugazi could return with a vengeance and at any moment.  If they also choose to take a path that dispenses with the conventions of what passes for modern alternative rock these days, they could easily set the world on its ear once more.