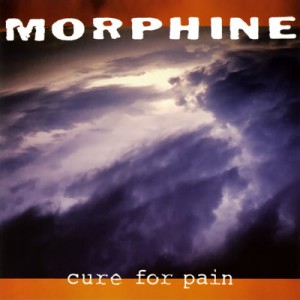 One of the more unusual CDs that I’ve added to my collection in the past couple of years, and subsequently fallen in love with, is the second release from the Cambridge, Massachusetts trio, Morphine titled Cure For Pain.  You won’t find music similar to that contained on this disc, either before its issue in 1993 or since.  Most of the time, music that doesn’t fit within an established sound is something to which you ought to pay attention, and Cure For Pain is one of the finest examples.  Led by singer Mark Sandman, whose primary instrument of choice was a two-string bass guitar played with a slide.  That’s odd enough, but his bandmate Dana Colley wielded a baritone sax as if it was his responsibility to find other sources of gloom not conjured up by Sandman’s low register, slack-jawed voice and the slippery grumble oozing out of his bass.  Cure For Pain featured drummer Jerome Deupree on most of the tracks before his departure due to health reasons welcomed Sandman’s former colleague in the bluesy rock combo Treat Her Right, Billy Conway, to complete the task.  Neither percussionist could be considered “busy”.  In fact Conway is credited with “cocktail drum” in both this band and the prior combo, signaling a use of drums for sly effect rather than as a demonstration of how a human with sticks can sound like a bag of marbles was just poured down the stairway.  That’s the wind-up, let’s examine the pitch.

While there are varying elements of rock, jazz, and blues surfacing across Cure For Pain’s 13 tracks, don’t expect any “jazz odyssey” workouts.  Everything’s said and done in 37 minutes and the two cuts bookending the disc are brief, moody instrumentals.  The remainder lyrically documents all manner of depression, dishonesty, discovery, and despair with a very appropriate and calculated musical score.  Live and radio favorites such as “Buena,” “Candy,” “Thursday” and the title track all made their first appearances here.  Each one of these is a cry from a man either in the process of ruining his life or reflecting on the damage he’s done to himself and others.  The subject matter is dark, but told from the point of view of an Average Joe that should be spending less of his time and money in the local watering hole.  Where Sandman has a specific story to tell about a doomed relationship, he tends to name the song after the woman spotlighted in the tale.  Each song draws back the curtain for a saucy, sometimes fiery solo from Colley.  If you know your saxes, you know that the bari sax is the most common lower register member of the family.  Yet there’s also the rarely heard bass sax, which Colley also trots out when the bari isn’t spooky enough.

One tune that flirts with keeping upbeat, but can’t quite get there is “All Wrong.”  Sandman and Colley both deliver phenomenal performances.  Colley’s running his sax through an effect on the solo that contorts the sound beautifully and Sandman’s more energetic playing comes while he’s singing the verses.  With lines like “she had a smile that swerved all over the road,” “All Wrong” is so right.  Another song that refuses to leave my brain is “A Head With Wings,” which begins as a kind of mid-tempo blues  before shifting into other, more deviant modes.  The “I got a head with wings” chorus is kept steady with Deupree’s syncopated boom-boom-bap and decorated with Sandman’s grunts and “yeah”s and Colley’s stuttering, barking squeak.  When Colley rolls out the snake charmer-cum-50s rocker solo, he’s whipping us to anticipate what else Sandman’s flying noggin can see.

There’s a dearth of guest musicians on Cure For Pain, but the appearance of Jim Ryan, mandolin player for the alt-country roots rockers, Blood Oranges, is really all they need.  He shows up as the sole performer underneath Sandman’s distant, Tom Waits whisper on the cut, “In Spite Of Me.”  The song’s words tread on ground stamped down elsewhere on the disc, dealing with a guy sarcastically praising his ex-lover’s success despite his best attempts to sabotage things for her.  Its placement amid the other pieces is as brilliantly jarring as tripping over “The Battle Of Evermore” on Led Zeppelin IV.  Sans percussion, using tinkly strings and hazy vocals, it veers course on Zep’s subject matter but not the delivery.

Morphine never did much in the way of sing-along, clap-along numbers, but they came closest with “Mary Won’t You Call My Name?”   It’s a song driven by a more conventional rock beat and broken down on the chorus to just a simple, skittering hi-hat and Sandman’s husky recitation.  The more typical methods are employed on “Sheila,” a song about a woman and her worshipful feline companion.  Read into that what you will, but Sandman’s chant of “Sheila, Sheila” will cut through you like an ice pick on your brain stem.  When a song this simple allows you to conjure any number of smoke-filled, tapestry-draped settings for the subject by using only music a handful of non-poetic lyrics, there’s magic involved.  That magic casts a love charm on the listener and positions Morphine as one of the most unique acts in rock history.

Morphine always had a more mainstream following in Europe than they did in the US.  The embrace of those fans saw Sandman’s life come to a tragic end from a fatal heart attack while on stage in Palestrina, Italy, at the age of 47.  There’s something very apropos about how Sandman checked out, doing what he loved, preaching to the converted.  His songs reveled in the pulp noir and his story, or what was known about it, had that perfect ending after tales of a heart as broken as his body.  We obviously won’t get any new material from the late Mark Sandman and there’s no other standard bearers skulking through dimly lit alleys that resemble him either.  Appreciate what you have, my readers, because your memories will be the only cure for pain that you can rely on one day.  Memories, morphine, and fascinating physical documents like this incomparable album.