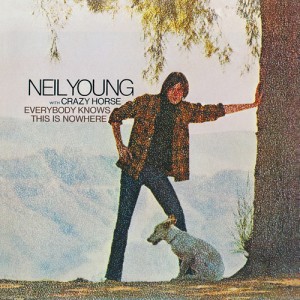 Neil Young with Crazy Horse – Everybody Knows This Is Nowhere

I’ve been a Neil Young fan for a long time and I haven’t been too picky about the items from his catalog that I’ve purchased over the years.  To me, even marginal Neil Young blows most music out of the water, so I wasn’t even discouraged by his contract-destroying run of releases on Geffen in the ‘80s.  But I’m not quite old enough to have fully appreciated the impact of his music as he first debuted on the scene with Buffalo Springfield and then proceeded to record numerous albums over the next several years at a dizzying pace.

As Neil was leaving The Springfield for the final time, he’d been jamming with a fledgling Los Angeles sextet called The Rockets.  He liked their guts and he liked their soul, but there were a few more musicians in the combo than he needed to support his newly brewing ideas.  Paring them down to a trio of guitarist/vocalist Danny Whitten, drummer Ralph Molina, and bassist Billy Talbot, and renaming them Crazy Horse, Neil laid down tracks in a frenzied and productive two-week session that would comprise Young’s second “solo” album, Everybody Knows This Is Nowhere.  It’s been 43 years since the album saw the light of day and it remains as fresh as it was on the day it was released and extremely influential on far too many artists to count.  I finally made a place in my collection for Reprise’s 2009 CD reissue (remastered from the original analog master tapes) and I feel like a fool for not having done so sooner.

Neil had a reputation of injecting a crunchier guitar sound into the folky inclinations of Buffalo Springfield and he took that one step further on his work with Crazy Horse.  Nowhere presents a sound that presaged the next 15 years of arena rockers’ attacks.  Young and Whitten’s guitars are loud and up front in the mix, while the rhythm section is persistent and largely without frills.  Examining the lead track, possibly one of the most classic of classic rock songs, “Cinnamon Girl,” we hear that it’s actually a clever inversion of a “Louie Louie”-type party rock tune.  The spangles that Neil tacked on to the piece consist of his vocal harmonies with Whitten, which simultaneously call forth methods used by both San Francisco acid rock outfits and Southern California surf rock combos, and a catchy bridge leading from the verse into a guitar solo that’s not much more than the same note played along to the song’s rhythm.  It’s deceptively simple, but it’s that beauty within the simplicity that characterizes nearly all of Young’s work, whether solo, with Crazy Horse, or with CSNY.

There are a few interesting experiments on Nowhere, such as the record’s title track.  The song is a country piece played on chicken-pickin’ electric guitars and with brightly sappy and sassy falsetto background vocals.  It’s an intriguing number that could go on well beyond its two and a half minutes without us growing tired of it.  And speaking of going on for a while, Neil drops “Down By The River” in the middle of the album and treats us to a nine-and-a-half-minute jam that occasionally coalesces into a true song.  When it does, Young’s voice, complimented by high falsetto harmonies from Whitten, sounds more earthy and pained than on most of his other well known tunes.  Neil’s signature spastic guitar note bursts slice right through Talbot’s bass line and above Whitten’s backbeat strumming.  Even this early in Neil’s career, longtime producer/engineer David Briggs had a knack for capturing him at his best.

What was Side 2 (track five on the CD) begins with “The Losing End (When You’re On),” another country song, this time one that shuffles more than it scoots along.  Neil has always done well with a twang in his voice to make things weepier for us, and this cut could have been stolen from the New Riders Of The Purple Sage songbook or correctly predicted something that would appear on a Wilco set list.  The band’s approach is tongue in cheek, however, as Whitten squeaks out some kind of shoeless hick gibberish just before Neil’s tasteful solo.

Nowhere closes with another Young and Crazy Horse epic, the just slightly lesser known “Cowgirl In The Sand.”  Clocking in at over 10 minutes, the song-as-part-of-a-jam ethic is employed by the group once more.  Neil still to this day greets his bandmates with a series of lengthy jams upon reuniting with them.  In fact, their newest release, Americana, consists of classic, well-known American songs that took form during jam sessions.  The record will serve as a warm-up to a set of new Young songs also delivered with Crazy Horse a few months down the road, so the jam that is Americana serves as the opening act for the new material.  Neil’s telepathic bond with Crazy Horse sort of requires that he tackle new projects with them in this way – it’s how they shake loose the cobwebs.  Exhibit A demonstrating the strength of material presented in this way is “Cowgirl.”  Neil jammed for night after night with The Rockets as he was contemplating his final escape from the constraints of The Springfield.  The chord changes and meaty rhythm supporting Young’s guitar solo were obviously not worked out on the fly, but the song steers clear of sounding over-rehearsed.  It isn’t easy to sound grizzled and tight at the same time, but that’s what Crazy Horse has always done for Neil Young and that’s why he has returned to working with them periodically over the decades.  Neil needs to have that garage rock sound every so often, but he needs to deliver it with guys that know what the hell they’re doing.  The element that’s missing these days is obviously the contribution from Whitten, likely the best foil Neil ever had at his side.  The Beach Boys-style harmonies on “Cowgirl” have never been duplicated on a Neil Young record since Whitten’s tragic death and they mark a high point on Nowhere.

My Neil Young collection is far from complete, but I feel better about the remaining holes after acquiring this record.  My collection prior to this purchase seems pale in comparison.  It’s funny how a single album can hold so much weight.