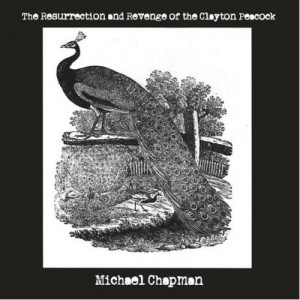 Michael Chapman – The Resurrection And Revenge Of The Clayton Peacock

Who says that an artist needs to slow down as he ages?  For Yorkshire, England’s Michael Chapman, the golden years have been his busiest years.  Although he began his musical career in 1969 with an album entitled Rainmaker, released on the Harvest label, and was a fixture on the folk club scene, he’s gone well beyond the constraints of that genre, remarking to audiences that, “I ain’t no fucking folk singer” and proceeding to pierce eardrums and open minds with his latest release, The Resurrection And Revenge Of The Clayton Peacock, issued this year on the Blast First (CD version) and Ecstatic Peace (LP version) labels.

The album’s title is a reference to the John Fahey record The Death Of The Clayton Peacock.  Yet the music on Chapman’s album serves to distance itself from Fahey’s acoustic guitar sounds as much as the title announces an opposing take on what can be accomplished on guitar, in Chapman’s case an electric guitar with scads of effects.  The end result lies somewhere between a Grateful Dead Space Jam, the recent live work of Robert Fripp, and the very early recordings of Steve Tibbetts.  Chapman’s account of The Clayton Peacock consists of two lengthy and untitled pieces, one 21 minutes in length and the other 17 minutes long.

Multiple overdubs, drifting and stinging atmospheric drones, occasional sparse percussion, and persistent bell tones wend their way through the speakers to hypnotic effect.  If you can imagine the alternate tunings and stylings of Sonic Youth six-stringers Thurston Moore and Lee Ranaldo slowed down and stacked atop one another, you’ll have a good understanding of Chapman’s current approach.  If you’re looking for some sort of rock and roll hoopla, you won’t find it here.  Yet the album is far too engaging to work as background music.  The harsh tones and smoking, vibrating echo chamber touches let Chapman claw his way to the fore of your attention.  It will thus be a bit too sedate for listeners who need to experience a four on the floor beat in order to get excited, but it will dazzle those of us that get off on original stabs at pulling unused noises from an amplifier.

Michael Chapman has been averaging better than one album a year so far in the 21st Century.  He may have stayed out of the spotlight for the majority of his career, but he’s working like a possessed genius now that he’s in his 70s.  He’s learned a hell of a lot over the decades and he’s suddenly decided to display that knowledge for all of us to experience.  Admittedly, I was unfamiliar with his work up until now, but The Resurrection And Revenge Of The Clayton Peacock has me extremely curious to dig into Chapman’s back catalog.

True musicians never stop doing their thing until they’re cold in the ground, and some, like Michael Chapman, lie low to find the opportune moment to rise from the dead and exact some revenge on the unsuspecting.  He definitely caught me off guard and I’m rather thankful that he did.