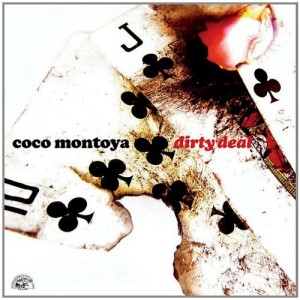 You wouldn’t know it from reading my reviews elsewhere on ClassicRockMusicBlog.com, but I have a fair amount of blues records in my collection.  Some of them stand out as monuments in the genre and most are “growers” that don’t necessarily jump right out and make you take notice, but instead bring you around to recognize their charms after multiple listens.  One of those in the latter category is Dirty Deal by guitar veteran Coco Montoya.  Blues fans who were following the living legend John Mayall from the early ‘80s to the early ‘90s will recognize Montoya as one of a handful of excellent axemen in Mayall’s revamped Bluesbreakers.  Montoya served for a decade alongside his idol before branching out on his own with a trio of releases on the Blind Pig label and another three for Alligator Records.  Today we’ll look at his third and last for Alligator and try to figure out why the tunes contained here keep flitting through my mind some five years after I’d first heard them.

Now, I first need to ask if I can get a round of applause for Alligator Records.  I mean, seriously, is there one bad record in their catalog?  My biggest exposure to some of the legendary artists on their roster came not from classic recordings, but from modern (post-1985) releases put out by Alligator.  Unfortunately things between Coco and Alligator didn’t work out, but before the guitarist parted ways for Ruf Records, he hooked up with Little Feat slinger Paul Barrere and sat him down in the producer’s chair for a run-through of 11 cuts of pure, sweaty genius.  The biggest criticism of Alligator releases has been that they all begin to sound similar when you listen to them en masse.  I can agree with that to a point, but I attribute that more to the way that modern blues is performed than to a template laid out by the label to keep things homogenized.  I fell victim to the critical train of thought myself for a bit and that’s probably why I didn’t dig deeply enough into what Montoya and Barrere (co-producer Roger Cole as well) were cooking up.  Now that the songs have infiltrated the caveman message center in my skull, the place that throws random songs my way for further consideration and against my will, I’m going back to Dirty Deal for another peek.

If you’re Paul Barrere, an accomplished guitarist in a band that’s capable of playing in a myriad of styles, you’d be tempted to pull your bandmates into the studio with you to lay down tracks.    Maybe they’ll play for beer and you can’t beat that price!  It turns out that the real life Barrere fell victim to that temptation just as our imaginary Barrere would have fallen.  Thus, Little Feat utility infielder and rhythm guitarist Fred Tackett is drafted for a particularly creepy six-string line in “How Do You Sleep At Night?” and is joined by regular Montoya sidemen, keyboardist Tony Stead, bassist Steve Evans, and drummer Randy Hayes.  Coco is then freed up to sing and shred our eardrums with his blistered solos.  The song, written by Mike Anderson, tells a familiar tale of a man left to sort through the wreckage of a broken relationship and questioning who to blame.  Can’t be the man; gotta be the woman.  How does she sleep at night after what she’s done?  Coco’s in rare form here and the band rolls effortlessly through the changes as if they’re sleepwalking themselves.

Coco Montoya is more of an interpreter than a songwriter and he relies on standards when he feels he can bring something new to them.  So he and the band tear into Johnny Copeland’s “It’s My Own Tears” like it had been chained up inside them and looking for an opportunity to bend iron.  The interplay between Montoya and Stead, where each of them bring it down low to let the spotlight shine on the other, gives us moments of seething sadness and violent explosions from Montoya.  The guitarist’s voice is as powerful as his instrument and is wracked with quavering anguish.  “Clean Slate,” also performed by Montoya’s touring band, is a Dan Penn-penned number that’s brighter than the album’s other cuts and serves as great contrast to the hard blues stompers that it sits alongside.  That’s something that Montoya picked up by playing with someone with the pedigree of Mayall: you need to mix it up a little bit and change the moods every so often or you may as well play the same song all night long.  It’s about as close to a pop tune as Montoya will let himself go, but man, does his voice sound great!

Ain’t it funky now?  Well, it is if you’re listening to “Put The Shoe On The Other Foot,” where Barrere climbs down from the booth to lay down some rhythm guitar of his own and calls Little Feat bassist Kenny Gradney and the late Feat drummer Richie Hayward ‘round to show ‘em how to shake a shuffle.  Yup, it’s a blues dance number with a slightly different backdrop to Montoya’s mania.  You can’t miss Coco’s attention-grabbing fills and leads, but it’ll sure make you miss Hayward.  God, what a loss!  But, wait!  Here’s the damn song I was looking for!  “Ain’t No Brakeman” keeps the same musicians wired up and once again shows that Gradney is the secret to Montoya’s funk fantasy.  It’s the record’s closer and they go out with a bang – upbeat, with groovy little organ burbles and a commanding solo from Montoya, topped off with a cold ending that leaves ‘em wanting more.

Do yourself a favor, blues fan, and get thee hence to the temple of Coco.  I promise you that you’ll have these tunes stuck inside your brain and screaming to get out just like me.  While you’re handing out favors, deal one our way and keep your car windows rolled up while you’re listening.  You will be singing along and I doubt you’ll sound as good as Mr. Montoya.  I’d rather remember his versions of these tunes than your own interpretations.