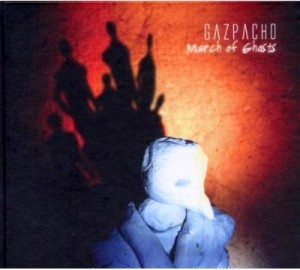 Gazpacho is an art rock band from Oslo, Norway, that has just released their seventh studio album, March Of Ghosts, on the Kscope label.  Composed of founding members, vocalist Jan-Henrik Ohme, guitarist Jon-Arne Vilbo, and keyboardist/producer Thomas Andersen, as well as relative newcomers violinist/producer Mikael Krømer, drummer Lars Erik Asp, and bassist Kristian Torp, Gazpacho has deviated from the formula used on 2011’s Miss Atropos, an album-length concept, to present a series of short stories told to the album’s main character by various spirits that have departed the earthly plane.  The trick for the listener, while enjoying 11 deliberately crafted pieces, is to determine the fate that befell each of the storytellers.  The lush production and orchestration makes this task extremely enjoyable.

Gazpacho are confederates of the band Marillion, having supported them on tour.  The differing approaches, with Gazpacho’s keyboard-heavy take flavored by violin and Marillion leaning more to  guitars, are a good fit, and both bands come at their material from similar directions.  Both bands have an undisputed mastery of the slow building, stately statement, starting songs with spare instrumentation and slowly adding the remaining ingredients until the music is bold and powerful.  One good example is “Black Lily,” a lead track whose video is currently making the rounds on the Internet.  Initial chords are laid out by heavily phased-out electric guitar and electric piano, but gradually pizzicato violin, softly beaten percussion, and sturdy bass guitar are added to support Ohme’s emotion-choked voice.  As the song rises in intensity, the bass stretches out, the drums are struck more solidly, and the strings fill out the empty spaces.

The pattern is repeated on the “Hell Freezes Over” interludes, of which there are four movements.  “Hell Freezes Over III” employs a swirling, disorienting synthesizer as the dominant instrument, while “Hell Freezes Over IV” submerses the keyboards and guitar beneath percussion and bass guitar before the guitar explodes and the bass begins unleashing piercing and pummeling tones.  Songs across March Of Ghosts never speed beyond mid-tempo, and remain primarily slow and sprawling.  Repeated use of the same pattern might be a drawback of some ensembles, but Gazpacho uses that as their strength.  Each song reveals itself as a lengthy ride along the seashore or as an epic tale condensed into a few short minutes.

“What Did I Do?” trims the already sparse lyrics back even further and concentrates on using skeletal percussion, sobbing violin, and a disembodied choir to convey sadness.  Mid-song, a simple 6/8 electric guitar arpeggio is the backdrop behind an ancient radio broadcast that remains just slightly inaudible.  While “The Dumb” sets things up with bare guitar and bass, using percussion to push the listener towards a more complicated ending.

Gazpacho has been paying dues for the past decade and should now enjoy greater exposure with their affiliation with Kscope.  As with many of their labelmates, studio work is tight, but is easily duplicated on stage as shown on Gazpacho’s 2-CD live set London.  March Of Ghost’s welcome addition to their catalog will be of interest to fans of Genesis, Gentle Giant, and No-Man, and is the perfect entry point into the band’s warm and thought-provoking world.