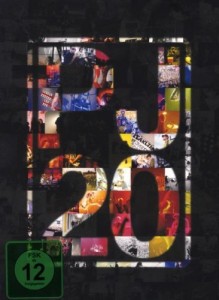 Last year, in celebration of the 20th anniversary of the release of Pearl Jam’s record 10, the band held a two-date appearance at Wisconsin’s outstanding Alpine Valley Music Theatre and followed it up with a mini-tour through Canada.  I missed the U.S. shows, featuring special guests Mudhoney, Queens Of The Stone Age, John Doe, The Strokes, and Chris Cornell, despite the fact that I only live three hours from the venue.  As a consolation and birthday/Christmas gift, I received a DVD of the Cameron Crowe-directed Pearl Jam Twenty film and the accompanying 384-page hard cover coffee table book published by Simon & Schuster.  The band also released a two-CD soundtrack to the film (which has incredible demos and rare live performances), but I haven’t gone out to purchase that souvenir quite yet.  Yes, I am stupid for Pearl Jam and have been for the last 20 years, but funds will only allow me to buy so much at once.  So let’s talk about the swag that I’ve already acquired and maybe I can help you decide if you’d like the DVD and book as much as I do.

I first want to talk about what Pearl Jam material I own and then you’ll have a better idea if your appreciation of the group is similar to mine.  I’m not bragging, nor do I feel like I must own everything Pearl Jam has ever released (a daunting task, considering the number of official bootlegs, DVDs, fan club singles, and rarities collections), but with any band you’re a fan of, you know how much tolerance you have for sifting through the ashes to sort out the gems.  I currently own all of the Pearl Jam studio albums, save their self-titled.  I also have Live On Two Legs and about a third of the officially released “bootlegs” from the 2000 world tour.  No other books, no other DVDs, and none of the extremely rare stuff.  I don’t get tired of hearing multiple versions of the same song, much as I feel toward the Grateful Dead’s material.  There always seems to be some nuance that keeps each performance different than the others – some nights they shine, some nights they’re out of this world.

There were a lot of fair-weather fans that stopped showing interest in Pearl Jam somewhere into the band’s second or third album.  The band became more experimental and acquiesced less to record label demands, but the “big rock sound” on 10 never really came back around again.  I never stopped being interested in the band’s music, and, upon further reflection, I do consider them to be the best rock group in existence.  No other band works as hard to keep their fans interested in their new directions and no other band gives as much live as Pearl Jam does.

With my “state of the nation address” above, you should have a good idea of how much I appreciate Pearl Jam.  Now, compare your own fondness to the band to mine, and see how you stack up.  Some of you are very casual fans and some of you are even more insane for the group than I am.  The very casual among you can stop reading now.  The DVD and book are too much Pearl Jam for you.  Yes, Cameron Crowe did a fabulous job in chronicling the band’s history from their roots in Green River, through the tragically brief Mother Love Bone, and all the way up through 2011, but many of you just won’t care to hear the details.  Those of you that haven’t left will want to start saving your pennies right now, because you’ll want to pick up either the book or the DVD, if not both, if only for the historical significance alone. 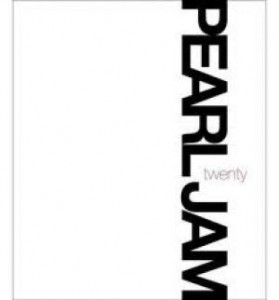 I actually read the book before I watched the DVD.  No particular reason; the pictures were engrossing, I started flipping through the pages, and before I knew it, I was already 80 pages into the damn thing.  Sure you can go online and read some encyclopedia entry on the facts of the band’s origin, but it’s never really been told in this way before.  After a loving foreword by Cameron Crowe, a guy who’s been charting the history of the little band that could all on his own and not knowing if any of his collected footage would be useful one day or not, there is a spotlight on each band member offering biographical information, but also asking each of them the same five questions: What was your first instrument and when/where did you start playing?; What was the inspiration behind why you wanted to play music?; What are your earliest memories of a musical influence or hero?; What are some of the earliest/most influential concerts you attended?; and What are some of the best memories you have from playing early shows with your first bands?  The differences and similarities of the band’s answers are very enlightening.

After a brief section listing events occurring from 1962 to 1989 that contributed to the cosmic coincidences that brought these five musicians together, the book traces each year from 1990 to present, noting significant events chronologically.  Quotes from band members and principle colleagues and collaborators such as Neil Young, Chris Cornell, Bruce Springsteen, REM’s Peter Buck, Dave Grohl, and longtime producer Brendan O’Brien are indicated next to the facts of the event or incident.  Also, major events such as the recording of each studio album, the Roskilde tragedy (where Pearl Jam fans were trampled and crushed to death by the surging crowd), and singer Eddie Vedder’s participation in the soundtrack for the movie Into The Wild have their own sections after the corresponding year which go into far greater depth on each topic.  More dazzling than the proper ordering of the facts are the incredible pictures taken by band members and their friends and entourage.  Some bands release coffee table books with images like these alone, without the descriptive text – very funny and revealing.

The DVD tells the same tale as the book.  You don’t have to necessarily own both the book and the DVD, but each one has its strengths.  Crowe’s direction and editing presents not only unreleased live footage of the band, but also captures them as they composed demos for some of their biggest songs (such as “Daughter,” first called “Brother,” as Stone Gossard and Eddie Vedder experiment while riding on their tour bus).  The footage also includes the band when they’re not performing or doing other music business business, and shows the camaraderie and humor that inspire everything they do.  Much of the humor is overt, but there are less obvious funny bits such as when Vedder, in his interview, tells Crowe to ask guitarist Mike McCready to explain “the drummer thing.”  McCready, somewhat incredulous that he was chosen to tell the tale that’s been told too many times, gives it the old college try and runs through the Spinal Tap-esque history of the men who’ve taken turns sitting behind the kit for the band.  Footage from other sources than Crowe is intermingled to illustrate Crowes’ point when necessary.  Example: Crowe is explaining how Vedder’s unique voice was imitated by other bands’ frontmen early on.  Quick cut to a scene from an episode of MTV’s Celebrity Deathmatch in which a claymation Vedder is tearing his stolen voice from the innards of Creed’s Scott Stapp.

The DVD is capped off with some bonus footage that had been edited from the film.  These scenes are also very interesting, but were only removed for the sake of the film’s brevity.  We can see bassist Jeff Ament as he goes back to his hometown in Montana to give viewers a glimpse as to why he felt compelled to move to Seattle.  We also see current Pearl Jam drummer Matt Cameron as he composes “The Fixer,” from the band’s most recent album, Backspacer.  We also find out more about keyboardist Boom Gaspar and understand his contributions to the group’s sound.  While not a full band member, he’s been performing with them for many years and his performance is now integral to the band duplicating their studio work on stage.

There are very few bands that measure up to Pearl Jam.  There are even fewer ensembles that are able to keep the principle songwriters and performers together for two decades.  I will always be a big fan of the band, and I’ll always have a fascination with rock music history, so my ownership of the DVD and book is a no-brainer.  Gauge your own necessity for these items on my interest and, buy or don’t buy, you won’t go wrong.  As for me, I’m already saving my money for Pearl Jam Forty and whatever else they send our way in the meantime.