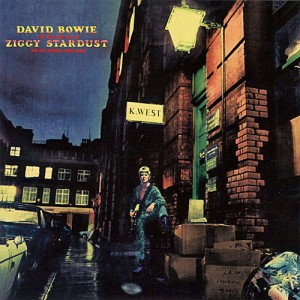 It’s staggering how many landmark albums are celebrating big anniversaries this decade.  We’d be hard-pressed to say that much of the music being released today will stand the test of time with the same resilience as the material filling record stores back in the ‘70s.  There are certain standouts, I can’t disagree with that, but the sheer quantity of excellent records released in any given year will never exist again.  Blame it on changes in the music industry, the move to the digital age by music consumers, or the fact that listeners don’t feel compelled to own an entire album to hear the few songs that they really love any more.  Maybe it’s not as exciting to be a “rock star” as it once was, and thus there are less of them populating the planet these days.  No matter the true reasons, we can chart our own rise and fall of the rock and roller just as one of their ilk once charted a fictional band’s ascension and demise.  Ziggy Stardust turns 40 in June and I can’t let the moment pass by without offering some comments on the record’s staying power.  Although Ziggy the rocker committed suicide onstage, numerous times, his spirit is alive and well and living among the humans he once preached to.

When first sitting down to write this piece, I had decided that it was important to dispel the commonly held notion that Ziggy Stardust was a concept album.  In doing further research, I’ve decided to abandon that track rather than become mired in a debate for which there cannot be a resolution.  I’ll keep my contentions much briefer than originally intended.

I’ve always thought of concept records as coherent works of art dedicated to a single story flowing through from start to finish.  I believed that Ziggy couldn’t fit into this category because the concept stayed malleable through a period of years as David Bowie picked up on additional influences and devoted studio time in bits and pieces to chronicling the story.  Bowie’s concept of Ziggy Stardust and the Spiders From Mars really needed to be experienced in a live setting to get a fuller picture of what the singer was trying to say.  Even then, the concept behind an alien rock star preaching an apocalypse before sacrificing himself via the method he used to preach (that is, rocking his fans’ asses off) was very hard to follow.  Reading the lyrics straight through does not provide us with a tight story.  The concept was instead lived by Bowie and, to some degree, his band, and was taken to such a level that Bowie could no longer separate himself from the Ziggy persona without breaking up the band and retreating from the stage to clear his head.  I’m still undecided on whether I consider this record to be a true concept album and I offer some proof based on Bowie’s rapidly growing catalog.  Ideas which would ultimately not be used for the Ziggy album made appearances on Hunky Dory (1971), Aladdin Sane (1973), Diamond Dogs (1974), and his covers record, Pin Ups (also 1973), where other musicians’ tunes seemed to fit perfectly within the Ziggy storyline.  Even the song, “All The Young Dudes,” given to the flagging Mott The Hoople, was written as part of Ziggy’s tale.  To me, Ziggy Stardust is only part of Bowie’s massive experiment at using rock and roll as performance art, but the album itself is not the concept.  Still, I’m open to other opinions.

One of the most difficult things to do when putting an album together that has one common theme is to make sure the bigger story is composed of smaller stories (songs) that can also stand on their own.  This is something that Bowie pulled off masterfully on Ziggy.  With songs being released as singles, casual fans could enjoy Bowie’s work in small doses and need not understand the grand designs of Bowie’s concept.  In fact, it’s the songs on the album that have given Ziggy the power to last through the ages, not the Ziggy concept.  I don’t have room to describe all the stellar moments, but I will talk about the ones that are freshest in my mind.

The record’s opener, “Five Years,” is the set-up for the storyline.  It’s not a flashy, attention-grabbing start, but it does serve to explain that Ziggy only has a limited amount of time to accomplish his mission before the Earth dies.  Beginning with a simple 3/4 bass drum and snare pattern played by Mick “Woody” Woodmansey, we’re in for a slow build-up.  While Bowie runs through a list of everyday people in everyday settings with electronic props, bassist Trevor Bolder anchors the bottom end and the chord changes.  Guitarist Mick Ronson devotes his attention to the piano and the string arrangement.  The vocals (including Ronson’s street rat harmonies) and strings eventually dominate as both rise to a crescendo.  The stage is now set for the rest of the tale and the mood is kept relatively mellow.

By the time we arrive at the monster hit, “Starman,” the guitars have emerged.  Bowie’s acoustic rhythm is especially solid, yet Ronson’s string arrangement plays up the melodrama of Bowie’s voice.  “There’s a Starman waiting in the sky/He’d like to come and meet us/But he thinks he’d blow our minds” is a particularly memorable lyric and it fits in well with the Ziggy story.  But it’s confusing to those that haven’t read the full plot.  Ziggy isn’t the Starman; he’s telling us about the Starman.  I don’t believe that fact was important to Bowie and he really left it to the interpretation of the listener.  How could he manage everyone’s perception when the song was so massively popular?  Already the concept was well out of control.

“Star,” one of four songs out of the eleven on the album with the word “star” somewhere in the title, is an awesome mishmash of Ronson’s power chords, 1950’s style rock and roll, bouncy piano and sassy background vocals.  The lyrics are Ziggy’s musings on why he ought to take up the profession of rock star.  It’s short, to the point, and has clever lyrical turns.  Most importantly, it does not sound dated at all.  Ken Scott’s production kept the performances pristine as if they’d sat airtight in a time capsule for decades.  Not many producers from this era had a mind to think how their work might be perceived in the future, but Scott was very kind to Bowie and elevated him beyond the consideration usually paid to pop singers.  This wasn’t as much about making a fast buck as it was about preserving ideas for posterity.

No discussion of Ziggy Stardust would be complete without mention of its inclusion of two of rock’s finest songs – “Ziggy Stardust” and “Suffragette City.”  Another 40 years could go by and I would never tire of these tunes.  Those that know me well know that I don’t usually hold specific songs in such high regard as I usually focus on an artist’s body of work and their general style of delivery.  But these songs are so absolutely brilliant that they demand my attention.

Beginning with that signature Ronson blend of a bright lead line and unconventional chords, “Ziggy Stardust” is the meat of the Ziggy concept.  The lyrics describe Ziggy the rocker (as far as I can determine, from the point of view of a rival rocker) and his undeniably charismatic presence.  Lines like “well hung and snow white tan” and “he was the nazz/with god given ass” clue us in to the homoerotic fascination held by the storyteller.  Ziggy is Jesus, Elvis, Lou Reed, Twiggy, and Rock Hudson (via outer space) all rolled into one, but he’s also just a guy who played guitar.  The song has always been about more than just Ziggy, as far as I’m concerned.  It’s more about that rush of emotion that we experience as we idolize our musical heroes.  We make them out to be bigger than life as we dream they’re far more than guys who play guitars.  They’re our heroes, our saviors, our love interests.

“Suffragette City,” another incomparable rock number, layers so many clever ides on top of each other that upon listening we might be tempted to believe that rock and roll was invented by Bowie and Ronson.  Leading off with stunning power chords that roll right into an unbeatable groove from “Woody” and Bolder, Ronson’s soon switched to a guitar progression that sounds less complex than it actually is.  Bowie’s multi-tracked saxophones and pounding piano are merely elements used to support the groove.  And the lyrics – some of Bowie’s best – are all about making sure his friend isn’t cramping his style while he makes room for a woman he’s lusting after.  The words can be looked at in many ways.  Is his friend also an occasional lover?  Why does “droogie” expect that he can crash there?  Well, “There’s only room for one and here she comes, here she comes.”  Throw in the “Hey, man”s and the “Wham Bam Thank You Ma’am” with a minimal, purring guitar solo and what may be The Classic guitar pick scrape, and you’ve got pure gold, Jerry.

With a 40-year celebration, you’re about to get the treatment that a collection of this importance deserves.  Expect to see reissued CD and vinyl packages with bonus tracks aplenty in the months to come.  My copy’s a 1999 24-bit digitally remastered UK EMI CD with vibrant photos and full song lyrics, and it serves me well.  But if there’s any album cover that would look better framed and hanging on your wall than the one for Ziggy Stardust, I have yet to see it.  The punks, the new romantics, the googly-eyed school boys and girls, and the classic rock fans all had their lives changed by listening to this one on vinyl.  That’s enough to make me consider also owning it in that format to help Bowie cash in on the nostalgia surrounding one of the finest recordings in music history.