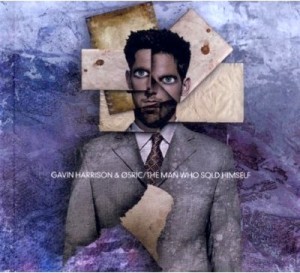 Gavin Harrison & 05Ric – The Man Who Sold Himself

Porcupine Tree and King Crimson drummer, Gavin Harrison, is one of the most prolific percussionists in the business.  While his extensive resume of studio and live recordings over the past 30 years exhibit his work with top names in European and American prog rock, jazz, and pop, he’s also responsible for writing books on his rhythmic philosophies and producing instructional DVDs of the same, all while remaining a constant fixture of Modern Drummer magazine and its reader’s polls.  Yet one particular project has continued to occupy his time over the past five years, a collaboration with extended range bassist/multi-instrumentalist/vocalist, 05Ric.  Their third album, The Man Who Sold Himself, was just released late last month on the excellent Kscope label.  Let’s have a listen and see if we can determine the allure.

The Man Who Sold Himself features 10 songs that are not, as you might assume, extended workout jams.  Each piece is very carefully crafted to allow the musicians to overdub their various performances and achieve a rather original and nearly indescribable new form of music.  The record’s opener, “Prize,” sets the pace for what’s to follow.  A rumbling burst of toms and bass in 7/4 time gives way to 05Ric’s lyrics questioning why we do the things we do.  Is the reward worth the cost we pay?  During the vocal sections, the music retreats to complex drum fills, scattered bass notes, and meandering grand piano, but the duo continually returns to the rumbling grind that opens the song.  05Ric’s jazzy vocal style employed here is reminiscent of live experiments by Frank Zappa, where he and his singers deconstruct their well-known songs in an ironic and almost sarcastic way.  Only 05Ric isn’t trying to deconstruct anything!  He’s quite an excellent singer, actually, and his ability to emote while adapting a meter contrary to the rhythm of the music can come across as him goofing or riffing.  That was also the brilliance of Zappa’s reworked classics, but 05Ric does it without the added humor.

The circular, tribal drum pattern of “Identitas” sets up a base for 05Ric to show us why he prefers an extended-range bass.  Although not the same instrument as the Chapman Stick (made popular by Tony Levin of King Crimson), an extended-range bass allows the musician to play with both hands on the frets, “comping” rhythmic chords while also playing a melody.  This isn’t merely “slapping some bass,” to borrow a term from the movie I Love You, Man, but actually allowing the performer to strike the strings in a wide variety of methods (popping, slapping, merely plucking, etc.) and using a wider spread of notes than allowed on a standard bass guitar.  Aside from showing off what he’s capable of on his main instrument, 05Ric is also bringing in guitar voices, vocal effects, vocal harmonies, and an overall more restrained vocal delivery.  This song, as with many others, ends up in a different place than it was at its start, but it’s a mesmerizing ride getting there.

Later on, Gavin Harrison enjoys the fruits of minimalism on “Body Temple.”  The simple cymbal ride, split for maximum stereo effect, is a step back from the busy ventures he’d used elsewhere, but our favorite percussionist is not about to cast what he’s learned aside while he batters us with masturbatory solos.  It’s the space between the notes, not the notes themselves, which tell the story.  This song is all about that space as both Harrison and 05Ric delay some of their attacks for the slightest fraction of a second to defy and shatter our expectations.  Music is always more enjoyable when you can’t predict exactly what’s coming next and there aren’t many predictable moments on this album.  And by the way, “Body Temple” features some of 05Ric’s best singing on this and his previous records.

“The 107” goes back to the business of getting busy, using some of the best interplay between the two musicians.  The bed beneath 05Ric’s wailing choir of ghostly jazz singers is Harrison’s sly use of his full kit while 05Ric accompanies the clatter on the lower end of his instrument’s extended range.  And what’s this?  Do I hear an electric guitar?  And a guitar solo?  Granted, this is rough jazz with some rock elements, but that’s exactly how John Scofield plays it and he’s never given me anything to complain about.  We hear a little bit of that style in the album’s closer, “Way,” but the boys are also intent on depositing a few more new ideas before they depart.  I have a very difficult time counting out a time signature for this song and it does seem to change every few measures.  That freshness and a dazzling display by Harrison as he sets up mini-motifs across a song less than three minutes long is what’s going to stay with us and keep us coming back to hear future projects from this partnership.

So, I broke my dry spell of not reviewing any prog records on classicrockmusicblog.com for the past few months, but then again this isn’t really prog.  If I had to categorize The Man Who Sold Himself (although I’m loathe to do so), I’d have to call this jazz.  But it’s really not your father’s jazz or his prog either.  The album is so far outside of categorization that it’s no wonder the boys keep coming back together in this ongoing project.  You see, there’s the allure.  Harrison may play with everyone under the sun, but he’s mostly playing music that he didn’t write.  When left to his own creativity, his mind is pulling down pulses from the ether that don’t really fit into conventional forms.  There are a limited number of musicians alive today that are capable of holding their own in that universe and 05Ric is one of them.  And what do we make of a drummer that spends his downtime from King Crimson and Porcupine Tree playing music that he finds to be even more challenging?  Forget about Modern Drummer and its polls!  Make this guy your own favorite drummer and we’ll end the debate right now!