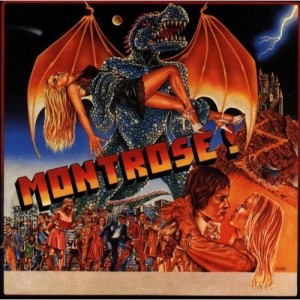 I’m still listening to the few records that I own featuring the late guitarist Ronnie Montrose.  This time around, I’d like to discuss the band Montrose’s third album, Warner Brothers Presents Montrose!.  Although I have very fond memories of this record, I recognize that it is a flawed gem.  Trying to carry on valiantly after the departure of vocalist Sammy Hagar, WBPM shows bandleader Montrose experimenting with diverse approaches in the classic, hard rock vein.  It’s easy to pick out stellar moments, but the overall vibe is that of a band that hasn’t settled in on a style that they can call their own.

With Hagar now off pursuing his solo career, the door opened for singer Bob James, whose methods were light years apart from those of Hagar.  Ronnie was able to keep a handle on his rhythm section, however, with drummer extraordinaire Denny Carmassi and bassist Alan Fitzgerald both returning to the fold.  The band expanded to a five-piece by adding keyboardist Jim Alcivar, and that gave Fitzgerald a break from serving double duty on bass and keyboards.  This shift brought the keyboards, whether piano, organ, or synthesizer, to the fore as another melodic voice to balance that of Montrose’s flexible guitar.  Backing James’ higher pitched (and somewhat pinched) vocals, the band’s dynamic had been altered completely.  Ronnie also served as the album’s producer, so there’s no one else to blame for WBPM’s lack of direction.  The band was his vehicle, but he still hadn’t figured out where to drive it.

Among the many courses charted across WBPM is the hard rock staple – quiet verses with a jacked up chorus – as found on “All I Need.”  A full band composition with somewhat pedestrian, love song lyrics, it’s a slow builder.  James, Alcivar, and Montrose’s acoustic combine to lay the ground work before stomping down hard with Carmassi’s thunder and into power chord heaven.  The verses remain quieter, but there’s the slightest bit of an edge with each successive go-round.  The song exhibits everything the band had learned about professional performance, but it lacks soul and guts.  Where else should we look?

How about the classic rock and roll standard?  Check the band’s take on the 1956 Eddie Cochran tune from the film, The Girl Can’t Help It, “Twenty Flight Rock.”  If the band had chosen one style of all those attempted on this album, this would have been the most successful.  Montrose’s guitar is smoldering as Fitzgerald keeps the bluesy bottom end in order.  And Carmassi is completely amazing as he invents new fills appropriate to a rockabilly tune on steroids.  Alcivar is at the piano and he does what he can to keep up with a band who’s worn the brake pads right off of their wheels.

Veer left into the slow and stately piece with a semi-historical setting and you’ll hear “Whaler.”  This is another full band composition with disappointing lyrics about the lonely rigors of the seafaring man.  Augmented by Novi Novog’s emotional viola and Alcivar’s ocean swell synthesizer, Montrose’s intentions are unclear.  The song is really unforgettable, but not always for good reasons.  It contains James’ weakest delivery, but the guitar/bass melody will never free itself from your mind.  Another downside is the piece’s length.  At nearly seven minutes, we quickly grow disinterested in the lamentations of this salty sailor.  A shift in gears and we’re now swerving into “Dancin’ Feet,” a James/Montrose number in which Ronnie spectacularly and purposefully mangles his tone.  The song was clearly meant to be the record’s BIG ROCK HIT with its faux-disco bass line and a guitar solo that’s more of a beat down than a series of notes.  It’s ultimately undone by lyrics that are beyond dumb.

The parallel pathway taken by “O Lucky Man,” a cover of The Animals’ keyboardist Alan Price’s contribution to the 1973 film starring Malcolm McDowell, is more successful.  Alcivar is the star here as he lays down a grand organ and piano line as the song’s anchor.  Montrose holds back with a solo that’s not nearly as dazzling as those found elsewhere in his catalog, but it does fit the framework of the arrangement perfectly.  Instead he chooses to show his chops on the brief guitar instrumental “One And A Half”.. The title is unfortunately indicative of the song’s duration.

Warner Brothers Presents Montrose! is again one of those records that I can’t wholeheartedly recommend to everyone reading this column.  But if you have an urge to explore the development of American hard rock in the mid-70s, the album is indispensible.  Be prepared, however, as the conventions of that musical style had not yet been set in stone and are only present here at times.  Upon listening to the album after several years away from it, I find myself really pulling for Ronnie Montrose and wishing he’d found the success he’d been so diligently trying to achieve.  But something about the band Montrose just never seemed to gel.  Too many lineup changes in just a few short years will do that to a group.  It also helps when your record label is giving useful advice for career building rather than just pushing you to crank out the contractual obligation for 1975.  Finally, Ronnie Montrose could have used a permanent foil to offset his sometimes flighty ambitions and ground him to a sound that was consistent and unique.  With Hagar gone, the new singer serving as a hired gun, and a revolving cast of bass players, Ronnie never had a chance.  The magic captured on the band’s debut was only a glimmer by the time Montrose dissolved, but some musicians’ glimmers shine more brightly than beacons shone by others.