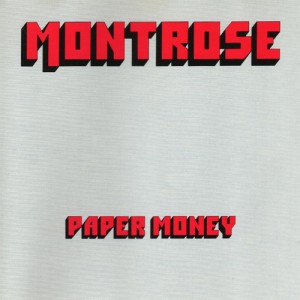 With the passing of guitarist Ronnie Montrose on March 9, 2012, I want to offer some thoughts on one of the two albums I own by the band Montrose – Paper Money.  As the band’s second record, and the last to feature original lead vocalist, Sammy Hagar, it marked a shift away from the hard rock assault found on the band’s debut, and a grasp at greater commercial success.  Unfortunately, there were a few things working against that success.  Conflicts between the band’s axe slinger and singer are almost palpable throughout the album.  Further, Ted Templeman’s murky production techniques, which worked better on records by The Doobie Brothers and, a few years later, Van Halen, did an inadequate job of separating Hagar’s powerful voice from Montrose’s multi-tracked virtuosity.  That being said, Paper Money is an important record in the history of American hard rock and also a well-remembered piece from my childhood record collection.

I’m not able to recall exactly how I came to purchase Paper Money.  There were two likely sources, an excellent, long-vanished used record store in my hometown, and a classmate whose brother’s embrace of a born again lifestyle led him to sell me a number of outstanding releases from the 1970s.  The mystery merchant’s loss was certainly my gain.  While I didn’t really know much about Sammy Hagar or Ronnie Montrose at the time, and I definitely wasn’t wooed by Warner Brothers’ art department’s lackluster effort on the cover art, I was familiar with the band Axe’s cover of “I Got The Fire,” which aired repeatedly on local rock radio giant, WAPL.  For whatever reason, I took a chance and bought the album.

The push for a wider audience started much as it does with many bands – via a cover tune.  In this case, Paper Money leads off with two of them.  The first is an odd organ- and bass-driven tune called “Underground,” initially recorded by fellow Templeman disciples, Chunky, Novi, and Ernie in 1973, just a year before Paper Money’s release.  This is followed immediately by a brilliant reading of The Rolling Stones’ “Connection.”  While this may be taken as sacrilege, Hagar easily blows Mick Jagger out of the water with a more decipherable and more emotional performance.   Montrose’s multiple guitar parts, both electric and acoustic, are beautiful, and do much to pull the song from The Stones’ country leanings.  Neither of these songs could be considered hard rock tracks, not even if you squinted at them sideways, but the album was a summation of a variety of attacks.

If Side 1 is the intriguing pantry, then side two is the meat locker.  Beginning with the aforementioned, blistering, “I Got The Fire,” the record now seems to say, “Forget all the goofing around, we’re getting serious now”.  Anchored by the very mighty rhythm section of future Heart drummer Denny Carmassi and future Night Ranger keyboardist Alan Fitzgerald on bass, both Hagar and Montrose pull no punches in delivering this classic of not so subtle sexual innuendo.  The strange detour on side two is in “We’re Going Home,” a convoluted piece that Hagar refused to sing, leaving the task to songwriter Montrose.  Ronnie Montrose was actually a very capable vocalist, but his voice was thin in comparison with Hagar’s beefier style.  Augmented by flute and mellotron, Montrose’s lushly layered guitar harmonies dazzle.  I would actually vote this uncharacteristic song as the one containing Montrose’s most inventive and sizzling guitar solo of his career.

This short album is capped off by the title track.  Carmassi and Fitzgerald again show off their abilities – Carmassi with a “Wipe Out”/tribal rhythm that dusts off every corner of his kit, and Fitzgerald with a bizarre robotic funk line.  Hagar is more impressive here than on most of the LP’s other cuts, with the emergence of the soulful delivery that he’d solidified in his solo career.  Montrose, meanwhile, shows off memorable licks reminiscent of those he’d displayed during his stint with The Edgar Winter Group on such classics as “Frankenstein” and “Free Ride.”  He also employs some very clever feedback for effect, which is immersed ever so slightly into the mix.

Paper Money always had the feeling of a record that was still in progress and released before the ideas could be fully fleshed out.  Things were weird back in the ‘70s, with bands needing to have new material in the marketplace at all times, and their record labels’ expectations of releasing at least one record each year.  It could be that with Hagar’s impending departure, both Montrose and Warner Brothers were anxious to close this chapter of the band’s history and open a new one.  We can only guess at all of the reasons why Paper Money was deemed “good enough” and unleashed on an increasingly fickle record buying public.  Despite its lack of major success, it had achieved Classic status long before we’d lost the namesake band’s talented guitarist to cancer.  Somehow losing Ronnie Montrose was like losing a little bit of my childhood – all because of my exposure to this nearly forgotten album.  I could never say that “This is one of the best records ever made,” but its songs are special to me.  I’d venture a guess that Ronnie Montrose’s impact went a lot deeper than most music fans realize and I know that I’m the only person with a strong attachment to this record.  RIP, Ronnie, and thanks for the music.