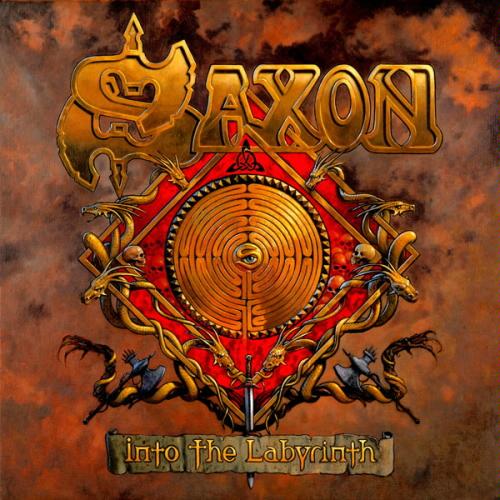 British metal stalwarts, Saxon have been around in one incarnation or another for more than 33 years.  They began as part of the New Wave of British Heavy Metal alongside better-known acts such as Def Leppard and Iron Maiden and have certainly shifted gears throughout the changing styles of the decades.  One element (aside from the constant participation of vocalist Biff Byford and guitarist Paul Quinn) has remained the same, however.  Saxon are loud.  I credit them with the beginnings of my worsening battle with tinnitus following a show in 1982 with Krokus and Cheap Trick at the Rib Mountain Speedway in Wisconsin.  Saxon flirted with hair metal and inappropriately glossed production, but they’ve returned, this time for good, to the sound their fans love — brutally beautiful, old school metal.

My son will tell me that this isn’t metal. I’d expect that opinion from a kid that’s growing up with Avenged Sevenfold, Slayer and Mastodon as his points of reference.  To me, Saxon represents the heyday when bands were first beginning to call their sound “heavy metal” as opposed to “rock” or “hard rock.” True, the origins of heavy metal can be traced back to the late ‘60s with Sabbath and Purple and Zeppelin.  By the late ‘70s and early ‘80s, bands that meant to deliver only the highest and most gut-crunching volume on everything they did regularly used the term “heavy metal” to describe their style.  Fickle American audiences have never embraced more basic noise ensembles such as Saxon for long periods of time.  Yet elsewhere in the world – Europe and Japan especially – true metal has always and will always be held in high regard.  It took Saxon a long time to trust this and to quit trying to crack into the American market in a major way.  Their last handful of releases exhibited Saxon’s relatively newfound sense of comfort with their hue in the grand palette of rock music.  I don’t expect them to ever feel the need to deliver a concept album, speed for speed’s sake, or emo sweetness in order to gain a foothold in the camp of the fair-weather fans.  Case in point: their latest collection, Into the Labyrinth on SPV Records.

Saxon can attempt to pull a fake-out at times.  The intro to “Demon Sweeney Todd” contains a hollow, dreamy series of simple vocal/synth chord changes, but only for 25 seconds.  After that, the gloves are off and Biff is cutting that dream in half with his characteristically piercing wail.  On again, off again drummer Nigel Glockler has us welcoming his return while he’s rapidly pounding the skins above his double bass drum thud.  Guitarists Quinn and Doug Scarratt provide a magnificent grind and punishing solos.  All of this to describe London’s infamous demon barber.  It’s what you would have expected from Iron Maiden had they continued on with Paul di’Anno at the microphone.

The pesky vocal/synth blend rears its head on the chorus of “Valley Of The Kings,” but the quintet’s performance on the rest is amazing.  Longtime bassist Nibbs Carter maintains a bottom end presence that allows Byford, Quinn, and Scarratt to have their way with the song.  “Slow Lane Blues” takes it all down to mid-tempo and more of an AC/DC feel.  Byford excels at this type of song and we’ve heard him reveling this way on Saxon classics like “Strong Arm Of The Law” and “Denim And Leather.”  The minor- key brooder “Voice” exhibits how Byford applies the perfect amount of delay and echo to his vocals.  The high notes ring on and on after each phrase is complete in a trick he’s been pulling since the band first began.  One of the coolest moments comes at the end of the disc on “Coming Home (Bottleneck Version)” where the guitarists employ, you got it, bottleneck slides.  The tune is a sparse blues with only tambourine keeping the beat.  Byford’s at his gutsy best and his voice is fuller than it’s ever been.

So SPV and Saxon are made for one another, that’s clear.  There are few metal labels that know you dare not bury a band under ridiculous production.  Into the Labyrinth simply steps back to let it all happen.  With a band as mature and clear of purpose as Saxon, doing it any other way would be a crime against the group and their fans.

And, yes son, this is pure metal.  After you’ve put a few more summers behind you, you’ll know what I’m talking about.  But you might want to invest in a pair of earplugs while you’re learning.