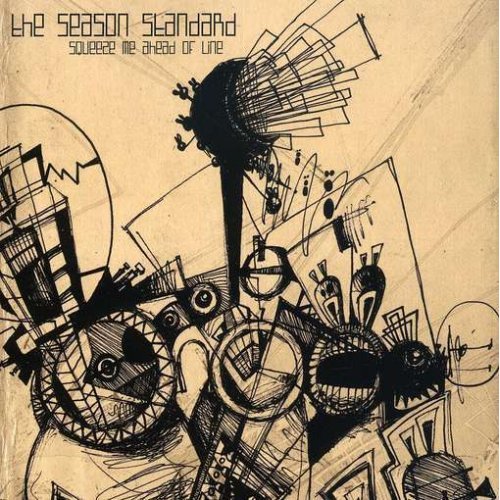 For a different take on progressive rock, you need to track down The Season Standard’s 2008 release on Austria’s Unsung label titled Squeeze Me Ahead Of Line.  Their sound is really without comparison and can only be discussed by picking apart the disparate elements of the compositions. The Season Standard is a quartet that sounds more like an even dozen of extremely competent musicians that are continually pushing musical boundaries all the while in robotic lockstep. There’s a mild Zappa influence here, but the group may owe even more to math-core outfits such as Don Caballero.  Produced by renowned touch guitarist Markus Reuter, The Season Standard follows his example of eliminating expectations and framework, relying on technology and complex performance.

The songs on Squeeze are crafted by the band as a whole, and there are few moments that don’t consist of each member simultaneously coaxing extremity from their respective instruments. Two of the musicians, Mathias Jähnig and Daniel Scherf play guitar, with Jähnig also singing and Scherf contributing keyboard and electronic effects.  Bassist Robert Koppisch and drummer Simon Beyer round out the group.

To hear an example of how this combo can both switch lanes with no advance warning and mash in seemingly inappropriate ingredients to their bubbling stew, dig the delivery on “The Water Fellow.”  What begins with Koppisch’s ten seconds of a Tony Levin impersonation quickly hits top speed with Beyer’s machine gun burst fills, Jähnig’s alarm clock tapping, and Scherf’s disconnected electric piano chords.  Jähnig’s voice is that of a sultry female nightclub singer, rattling off nonsensical lines in English about how “you dare to simplify the lion”.  Beyer’s style of drumming is comparable to that of Zach Hill of the band Hella — always busy, always engaging, always amazing.  He kicks off “Kaira” as if he’s heading into a solo or an audition for John Zorn’s Naked City, but it’s all only the bedrock for an odd jazz atmosphere with funk bass underpinnings.  The guitarists come up just short of wearing their Zappa on their sleeves and the cave echo and EKG effects only make it all weirder.

“Makkk” is mainly a workout for the rhythm section with Koppisch confidently heading down a throbbing path towards the unexplained.  Scherf is dropping in computer-synth noises that drift from scratching turntables to turbines humming.  Some whirling feedback lulls us into submission just prior to a near guitar solo and more of Beyer’s algebraic battering.  “The Sheep Sheep” has a guitar line so complex that they may have been tempted to call in Steve Vai to translate.  Koppisch is actually keeping up with Beyer’s 32nd note bass drum and toms.  Someone thinks to add in noodly guitar line that picks up the songs melody seamlessly at its end.  They then close with “Super Push” as it first beckons with Beyer’s ride cymbal and Koppisch’s penetrating bass guitar tones, then Jähnig’s meandering vocals and extremely unusual guitar chords.  Those chords only get more dissonant over the course of “Push’”s near eight minutes, and we’re left with a fade-out of repeating machine noise.

I guarantee that you’ve never heard a record quite like Squeeze Me Ahead Of Line and I’m also certain that you won’t be able to play it around anyone looking to tap his or her toes and hum along.  Oddly enough, there are times when the music is even danceable, but you’ve got to also be willing to throw yourself into spastic frenzy when The Season Standard suddenly shatters the rhythm.  There are infinite layers to this record and that means it’ll take a long time before you get tired of listening to it.  Too much music these days fails to concern itself with making a timeless statement bereft of genre.  Squeeze is definitely not contained within any barriers of time and The Season Standard will likely continue forcing us to expect the unexpected.