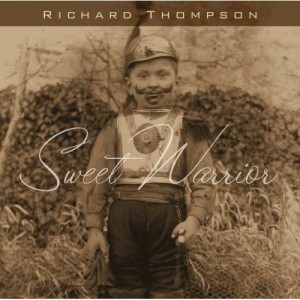 Veteran singer/guitarist Richard Thompson is enjoying a bit of a career resurgence with the release of his latest album, Electric.  Coincidentally I’d recently made a decision to fill some holes in my collection by acquiring material he’d released since the late ‘80s.  Up for discussion today is his 2007 collection, Sweet Warrior, licensed for U.S. release by the Shout! Factory label.  As I’d listened through the album’s 14 tracks, I felt as if I was reconnecting with an old friend as I was quite into his music during my college days some mumble-mumble years ago.  His alternately ridiculously witty and heart-wrenchingly moving lyrics and his incomparable guitar skills intact, Warrior is as perfect a jumping on point as any for those uninitiated to the Cult of Richard.  I’ll draw attention to a few of its selling points.

Richard Thompson, whose career stretches back to the late ‘60s as a founding member of the incredible British folk rock ensemble Fairport Convention, had had enough of being under contract with record labels.  His runs with Polygram and Capitol in the US produced evidence that executives didn’t really get how to market his music.  Though often critically acclaimed, he largely failed to connect with an audience for his unique style.  While his records sometimes see release on his own Beeswing Records these days, he’s aligned himself with the like-minded New West label for Electric.  Prior to that, he’d funded his own recording sessions and then licensed the product to various companies for releases to specific global markets.  The well-respected Shout! Factory, which now concentrates more on their DVD and Blu-Ray releases, licensed Sweet Warrior for U.S. release.  It’s a bitch when musicians have to struggle with the business end of things, but Sweet Warrior saw Thompson finding a temporary solution to having a major label breathing down his neck and creating unnecessary pressure during his creative process.

The first thing to know about Richard Thompson’s amazing guitar talents is that his playing, whether acoustic or electric, is dissimilar to that of British veterans who’d grown up listening to American blues records.  Thompson honed his abilities in a folk music setting and his approach is very identifiable.  When plugging into the amps, his guitar sound can tend towards the angular and employs precise picking.  His acoustic playing is warm and inviting.  The second fact to reckon with is that Thompson’s voice is not what you might consider typically “beautiful” or “dynamic.”  While his music doesn’t require the leap of faith necessary to get past shortcomings comparable to those of Bob Dylan, he does sound more like your next door neighbor, who happens to be a much better singer than you’d ever imagined he’d be.  Thirdly, Thompson is a man who’s unashamed to wear his heart on his sleeve.  His ballads, the lyrics often centering on a doomed love or relationship torn apart by unpreventable circumstances, are shattering.  His rockier numbers often shine a light on the silliness of human behavior and Thompson is quite willing to skewer anyone whose actions betray their high-mindedly stated intentions.

So Sweet Warrior offers no great surprises, but it does deliver material that fits right in with the best Thompson has offered over the decades.  Witness “I’ll Never Give It Up,” one of several songs whose lyrics deal with a churning disgust with the lack of direction or completion of the Iraq War, features a brilliant Thompson solo and a vague lyrical target who sees “red, white, and blue” as he creeps around and unconscionably pulls stuff that pisses Thompson off.  As a transplant to Los Angeles, Thompson has every right to criticize the actions of his adoptive government.  He’s not naming names, but you know who’s irking him.  He’s tastefully supported by longtime cohorts, Michael Hays on rhythm electric guitar, Danny Thompson on acoustic bass, and drummer Michael Jerome.

A mid-tempo tear jerker is revealed on “Poppy-Red,” a tale of a man who’s been torn in half by the death of his woman/partner/friend.  The key changes, straining the limits of Thompson’s voice on either end, add to a lyric straining for a release from this grim fate.  He’s joined on the chorus, as in many places elsewhere on the album, by the beautifully complimentary harmony vocals of Judith Owen (Note to trivia buffs: the wife of Spinal Tap/Simpsons man of a thousand voices, Harry Shearer).  Bassist Taras Prodaniuk offers relief to Danny Thompson here and Richard Thompson contributes a harmonium line for texture.  Later on, the sharp crack of a snare drum launches the white guy reggae of “Francesca.”  Woe to any woman named in the title of a Richard Thompson song and this “Francesca” is no exception.  Thompson asks who dragged her name through the dirt and left her the whore of the world.  “Francesca” may likely be symbolic of some thing or person for which Thompson feels sorrow, and he sings accordingly despite the honking tenor sax courtesy of Joe Sublett and Thompson’s own bright organ fills.

Much has been written on the song “Dad’s Gonna Kill Me,” a lament from the point of view of a soldier questioning his actions and fate while serving time in Baghdad (the “Dad” in question).  But the song that really captures the sense of being stuck in a doomed situation is the epic “Guns Are The Tongues,” told mostly from the point of view of a woman who seductively convinces young men to sacrifice themselves via car bombings to strike blows in an ongoing guerilla war against an occupying force.  Stretching out over nearly seven-and-a-half minutes, “Guns” serves more evidence of Thompson’s focus on conflict across the globe and how the lines of nobility are blurred during warfare.  After all, what good is growing up as a folkie if you can’t deliver a series of good anti-war protest numbers?  Thompson delivers in spades on this topic across all of Warrior.  Here his elegant mandolin and hurdy gurdy, with the fiddle playing of Sara Watkins, round out the sound of ceaseless conflict and sadness.

The album’s closer is “Sunset Song” and a lyric regretting the abutting of a caring woman’s caress against an uncomfortable social setting forcing the song’s subject to leave town.  This is probably as close to a folk song as anything included on Warrior and it’ll deliver the same chill down your spine that you’ll feel from some of the more stripped back numbers by Jethro Tull, such as “Dun Ringill.”  Thompson sticks to the lower end of his vocal range, where he seems most comfortable, and his warm tones perfectly capture the sense of sorrow during the protagonist’s departure.  Thompson’s acoustic guitar is animated and deliberate, while his accordion playing merely urges the tears to flow more freely.

Despite my love for Richard Thompson’s work, the nature of his approach mandates that enjoyment comes through an acquired taste.  For those that he’s won over, there’s a wealth of material in his catalog that seldom falls short of the mark of excellence.  Sweet Warrior thus provides a solid introduction for the newcomer and one more success for the longtime fan.  Yet with as many quality collections under his belt, Thompson has rarely presented a single release that spans the entirety of his capabilities as handsomely as this record.  I’m hearing great things about Electric, but I’m very glad that I started gathering up the missing pieces by acquiring the underrated Sweet Warrior first.