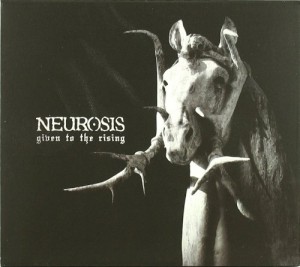 Neurosis – Given To The Rising

I’m pretty picky about my metal these days.  Yes, there was a time when I wasn’t quite so discerning in my quest for volume and riffs.  But there’s a lot of stale, repetitious crap out there that doesn’t do a whole lot to establish an identity for the artist.  If metal is to be respected as an art form, it must push boundaries.  Or shatter them, as in the case of Oakland, California’s Neurosis.  When the constraints of both punk and metal began to inhibit the group’s full senses onslaught, they just stepped beyond.  Although formed in 1985 as a hardcore punk group, there has been a steady transformation in the direction of down-tuned doom metal and then into something far more visceral, primal and cosmic.  Their live show adorns the permeating sludge with a succession of haunting visuals, psychoactively nightmarish not gore-soaked.  Establishing their own Nerot Recordings label, and incorporating a visual artist into the band’s roster over most of their run, the band retains full artistic control of their messages of thought-provoking ruin and despair.  Hearing their ninth studio album, 2007’s Given To The Rising helped me realize that we metal fans hadn’t yet reached a dead end on the road to new dimensions of dark artistry.

Neurosis’s line-up has stayed fairly consistent over the decades, which just makes their sonic transition all the more amazing.  Neurosis evolved through the will of the collective entity, not through the influx of ideas from replacement musicians.  The band’s skeleton and guts, guitarist Scott Kelly, bassist Dave Edwardson, and drummer Jason Roeder, grew flesh with the addition of vocalist/guitarist Steve Von Till in 1989, and began clothing itself in the raiment of keyboardist/sampler Noah Landis in 1995.  The role of the visual artist has been played by a few different cast members, but in 2007 was handled by Josh Graham.  His incorporation of iphotographs of the incredible statuary found at Budapest’s Heroes Square contrasting against the drawn images of spectral ravens, eclipsed suns, and horrifically antlered equine creatures are chilling and unforgettable.

A good summary of the album’s sound is found on “Fear And Sickness,” which opens with a high, pulsing keyboard tone setting the tune’s eventual rhythm.  The piece slowly unfolds and is reminiscent of Black Sabbath’s titular song, only instead of wondering about the black figure lurking in the shadows,  we’re aghast that something has torn a hole in the sky and something worse is about to emerge.  Kelly’s and Von Till’s guitars diverge with Kelly holding a more traditional Slayer-esque air and Von Till unleashing a demonic vacuum cleaner hellbent on tearing the carpeting from your floor.  Longtime producer, Steve Albini doesn’t fail to deliver on the promise of “noise as is,” bringing stinging rawness to the ear.  After a cacophony of Roeder’s meteor-tumbling-through-an-asteroid belt drum bursts, Kelly’s opening guitar tones are reprised as the strangled creak of a distress signal distorted across light years.  Gripping.

“At The End Of The Road” arrives with the whir of a dormant machine, quiet borderline feedback, distant and meandering bass tones, and the churning menace of a twistedly distorted guitar.  Roeder’s drums pound out the pace of a cautious combat unit scouring the hillsides for survivors of either army.  Then Von Till’s voice cuts through the fog with a message fighting to escape the mists of the Underworld, growling and howling as if mouthed by Linda Blair.  A bizarre Morse code bounces along while the meters are bleeding red.  Before the mid-point of the eight minute monstrosity, we’re feeling the music more than hearing it.

A crunchier guitar approach is taken on “Water Is Not Enough,” while ethereal synthesizer mecha-pixies flutter in and out of reality and Von Till alternately mumbles and groans.  The riff turns ultra-heavy, akin to a King Buzzo or Kim Thayil meltdown, before what sounds like a cello saws out a mournful breakdown leading to an eventual return to pummeling brutality and a glimpse at the buzzing mecha-pixie breeding grounds.  “Distill (Watching The Swarm)” follows with a nine minute soundtrack to a shambling man-brute careening his way through a forest.  Roeder’s control of the pace here is key, and he switches to demolishing his crash cymbals when the guitars get turned up past 10.  Landis’ fluttering rotors, skittering skycraft, and chirping avians belie the guitarists’ desires to lay waste to the battlefield before them.

Listing 10 songs that top up over seven minutes in length on average, there are also moments of brief yet pure sonic experimentation, such as is found on the appropriately titled ninth track, “Nine.”  The music bed may involve guitars, but if so, they’ve been altered so as to be unrecognizable.  I suspect that Landis is responsible for most of the sounds found here, as we’ve already heard similar swirls of razored death and pulsing beacons from across the cosmos elsewhere on Rising.  Von Till recites a poem seemingly from the lips of someone attempting to make sense of the past amidst the rubble of civilization’s and technology’s demise.  Whispered and questing, the message ends abruptly, leaving the listener as confused towards the protagonist’s future speak as he is to our society.

Given To The Rising, like all Neurosis albums is a harrowing ride.  But for those appreciative of highly creative expression despite or in addition to oppressive noise levels will sign up to take this ride time after time.  The influence that Neurosis has had across the music industry is incalculable, but the band themselves cite artists as diverse as Joy Division, Milwaukee punk experimenters Die Kreuzen, and author Jack London as key to the development of their style.  This album is still too new for us to determine how essential it will prove, but I’d gamble heavily that future generations will look to Given To The Rising with the same level of respect currently bestowed on Kill ‘Em All, 2112, Superunknown, and Master Of Reality.