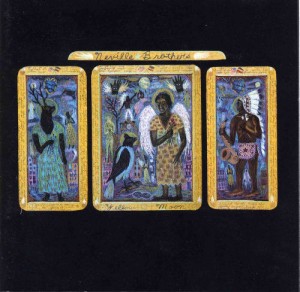 With recording careers stretching back to the mid-1950s, the individual members of New Orleans’ Neville Brothers have found varying levels of success.  But when united, vocalist Aaron, keyboardist Art, saxophonist Charles and percussionist Cyril made a bold bid for pop stardom in 1989 with the Daniel Lanois-produced Yellow Moon on A&M Records.  Lanois, himself a native of The Crescent City, coming hot off the heels of success with Peter Gabriel’s So and U2’s The Joshua Tree, wanted to capture The Big Easy’s mystical history as a backdrop to The Neville’s sound.  What resulted was perhaps the finest recording in which any members of the group had ever been involved, whether solo or with the family.

Augmented by Willie Green on drums, Tony Hall on bass and Brian Stoltz on guitar, The Neville Brothers uncorked Yellow Moon with a sigh rather than a pop on the Cyril Neville/Willie Green-penned track “My Blood” and a plea for Jah to look after the children of the African Diaspora now settled in the unsettling Western Hemisphere.  The song is hand drum-heavy, as you might expect, as is the rest of the album, with each member of the group credited with additional percussion.  As the song slowly reveals itself, it’s as if we’re parting the moss hanging from the trees to see the group perform.  Lovely four-part harmonies are interwoven and Charles’ sax injects a quizzical counterpoint to the surging soul.

The best known of the brothers, Aaron takes the lead on the title track, his composition.  A creepy faux-reggae, the lyrics are the story of a man begging a supernatural satellite to keep watch over his wayward girlfriend.  His fears of unfaithfulness are projected through the questions he asks of the moon.  Aaron’s impassioned falsetto, his trademark dances between the lines of sorrow.  Meanwhile, Art’s keyboards provide a bright contrast to the gloom and Charles delivers a solo straight from the aisles of a darkened, otherworldly carnival.  Cyril later delivered somewhat of a signature tune for the group in the form of “Sister Rosa,” the tale of the legendary civil rights icon Rosa Parks.  With the catchy refrain, “Thank you, Sister Rosa/You are the spark/That started our freedom movement/Thank you, Sister Rosa Parks,” it became a focal point of Neville Brothers live shows in the years to follow.  And true to form with Cyril’s other creations, it focuses on aspects of ethnicity not highlighted as prominently since the mid-1960s.  I could do without the dated ‘80s keyboard sound, but Hall’s bass adds a wonderful growling funk aspect that recalls George Porter, Jr.’s work with Art Neville’s previous outfit, The Meters.

“The Ballad Of Hollis Brown,” a Bob Dylan song which sent chills down this writer’s spine when first heard at a tender age, is hauntingly retold by Aaron as spectral slide guitar and Hall’s bass set the mood behind him.  There’s no delicate way to reinterpret this tale of a desperate man’s actions towards himself and his family, but Aaron, the master interpreter of other’s songs, demonstrates the necessary build to the tale’s tragic conclusion.  One of two Dylan covers handled by Aaron (the other being “With God On Our Side”) on the record, it’s a testament not only to the powers of Aaron Neville as a musician, but also to the widespread influence left by early Dylan material across many American subcultures.

Another standout moment on Yellow Moon comes with the brothers’ version of the A. P. Carter standard, “Will The Circle Be Unbroken.”  The brothers trade verses when not supporting each other’s lines as guest Brian Eno cloaks the number in an atmosphere of shimmering synthesizers.  Stark and emotional, it also provides some of the glue that helps hold the tracks together as one identifiable statement.

What’s evident on Yellow Moon is that The Neville Brothers really love performing with one another.  There’s a bond that comes through kinship which is expanded when the boys become band mates and Daniel Lanois picked it up exquisitely when at work in the studio.  And outside of material by Doctor John or The Dirty Dozen Brass Band, New Orleans itself is fettered in sonic form better than heard anywhere else.  It’s a magical release that has dimmed little in the passing decades.  The brothers still reunite on occasion, but they’d be hard-pressed to recapture the essences snared back during the disintegration of the 1980s.