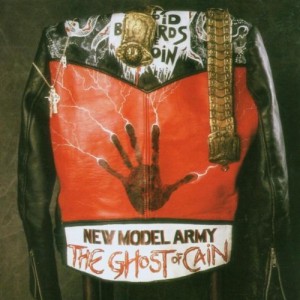 An unlikely meeting of established classic rock cred and crusty U.K. punk anger directed at the establishment occurred with the release of the band New Model Army’s third album, The Ghost Of Cain on Capitol/EMI in 1986.  With the inclusion of producer Glyn Johns, whose resume was already astounding at that time, the West Yorkshire trio, who to this day remain largely unknown outside of Europe, crafted a record filled with angrily-worded railings against the stifling atmosphere of Cold War Britain and the cold indifference of the Thatcher government.  Few purchased this album on the Western side of the Atlantic, but those who did were blessed with the ownership of a document whose teeth have dulled little over time and which contains lyrics nearly as relevant as they were three decades ago.

Led by singer/guitarist Justin Sullivan and backed by longtime drummer Robert Heaton and newly-recruited teenage bassist “Moose” Harris, the group was fueled by the provocative words of Sullivan’s romantic partner Joolz Denby, who’s now a successful novelist.  Anyone who did chance across this release was greeted by propulsive rock rhythms augmenting Sullivan’s/Denby’s political observations.  Without those rhythms, Sullivan’s delivery may have sounded more like folk music from a man with a new amplifier to show off.  The band is the thing that distinguishes this music from that of artists of a similar bent such as Billy Bragg.  The songs “51st State,” “Poison Street” and “Lights Go Out” were featured prominently on college radio during the mid- to late ‘80s, sweaty, fist-pumping anthems all.

But it’s when Sullivan detours from this formula that we get right to the meat of what matters.  “All Of This” provides a prime example when Sullivan employs his acoustic guitar and whispered, Roger Waters-indebted vocals as the main machinery behind his examination of the military industrial complex and what passes for Western foreign policy.  Lines such as “Hold me tight, hold me fast/Standing here on the wrong side/Of this bullet-proof glass/There are no questions left for us to ask” illustrate the growing paranoia of those questioning the ugliness of “the will of the people.”  His positioning of his audience alongside others wondering how representative government could go so wrong ensured an alliance with anarchists and squatters across their home continent.

With a skittering guitar figure punctuated by raw power chord blasts, “Western Dream” barrels right in to a list of the dazzling brilliance of distractions to morality offered up through the free market.  With the tempo threatening to accelerate beyond the band’s control, Sullivan rejects all he sees in a chorus exclaiming “All lies, all lies/All schemes, all schemes/Every winner means a loser/In the Western Dream.”  “Lovesongs,” which follows, shows Sullivan’s romantic side.  This 6/8 shambler laments that the radio always plays love songs whenever his revolutionary gal pal is far away.  That sounds a bit goofy when laid bare on its own, but fits in perfectly when cast amidst the venom he and that gal pal have been spewing forth elsewhere.

Although the record’s melodies are instantly infectious, if only in that a crowd could surely chant right along with Sullivan without memorizing his back catalog first, one song has stuck with me all these years – “Heroes.”  The lyrics are pure condemnation of a previous generation, whose 20th Century actions, meant to solidify world peace and prosperity, have only led to the brutal domination of the haves over the have nots.  The chorus summarizes: “You are not our heroes anymore,” and soon we’re also guilty of sloganeering.  Then closing with the abrasive “Master Race” and its supremely growling electric guitar set to a driving drum beat, Sullivan’s anger stays at an all-time high.  This time he’s questioning the trappings of Western society itself and how our daily rituals can be considered more advanced than those in lesser developed corners of the world.  With uncontained frustration, he sings “Goddamn this master race/That we’re born in/Goddamn this howling wolf/that we’re serving,” as if he’s got his hands clenched firmly around the keystone of our hallowed halls and he’s ready to tear it all down with no notice.

So, you’re right, no actual revolutions were caused by the creation of The Ghost Of Cain, and the band’s political stance was the main factor in preventing them from securing visas to the U.S. to spread their views to some of the people who could most benefit from hearing them.  But weirder, more polarizing albums have shown up over the decades, some with subtle societal leanings and others that found anger to be the antithesis of caution.  This isn’t a punk album, but it does have a tripod set evenly on the corners of the lands where punk, classic rock and folk protest music intersect.  Many other artists have tried to share material such as this only to find they’ve merely alienated strangers while preaching to the converted.  But not New Model Army.  The Ghost Of Cain is a remarkable record that succeeds because it contained the most important element found on any good collection of material – killer songs.  Track this one down and then let me know if I haven’t spurred something revolutionary in your own record buying habits.