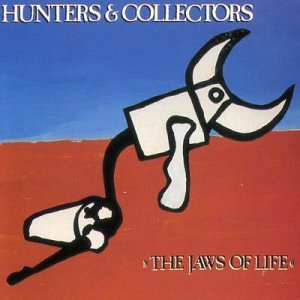 Hunters & Collectors – The Jaws Of Life LP and Payload EP

I’m always in search of records that flew under the radars of the music-loving masses.  Today’s blog entry deals not just with an unsung album, but an unsung band as well – at least as far as music lovers outside of Australia are concerned.  We flip through our calendars and travel back to the early to mid-80s where an amazing and original band called Hunters & Collectors are trying to spark some magic with their third album, 1984’s The Jaws Of Life.  The group is evolving beyond their early attempts to emulate machine music using typical rock band instrumentation.  Funk and soul are entering the studio, but the hands at the controls once more belong to the legendary German sonic constructor, Conny Plank (Can, Kraftwerk, Brian Eno, Eurythmics, Ultravox, Neu!, Devo).  Recorded in 1984 at both Plank’s studio and the band Can’s studio in Germany, The Jaws Of Life became one more record that failed to reach an audience open to the group’s bass guitar-dominated rhythms, a tight horn section, and the rough-edged vocals of guitarist/leader Mark Seymour.

Hunters & Collectors’ love of Krautrock is exhibited right up front in their name, taken from a song on Can’s 1975 album, Landed.  Thus the band seemed to almost anticipate the will of Plank during their studio sessions.  The meetings were very productive, but the results were a bit beyond even the grasp of American New Wavers and MTV fans.  Despite having a reputation as one of the best live bands in Australia, the group eventually disbanded in 1988, after a few minor hit singles hit the airwaves.

Early material from the group didn’t easily find its way into American record stores.  All of it is long out of print on their original Australian label, White Label Records, but Liberation Music has re-released The Jaws Of Life on CD in Australia and New Zealand and tacked on the 1982 Payload EP as a bonus.  That’s right, you’ll have to pony up for an import copy if you’re interested in tracking an unopened version of this album down.

If I’ve got you fired up to look into this band’s work, here’s what you can expect on The Jaws Of Life and Payload.  John Archer’s bass guitar is going to rule your world!  Every song is solidly anchored in his aggressive approach and the vocals, horns, guitar, and keyboards are merely aural dressing.   This is most evident on cuts such as “The Way To Go Out,” where Archer’s line and the clickity clack of Doug Falconer’s drums pave the way for woozy slide guitar work and the gang leader chanting of Seymour.  The near jazz syncopation of his vocals belies the quick 4/4 from the rhythm section.  The song sounds like it’s on the verge of an explosion, and the tension is heightened with the chicken scratch of Seymour’s rhythm guitar.  The brass players’ sound, steered by longtime French Horn player, Jeremy Smith is bright and full.

“It’s Early Days Yet” churns along again at the behest of Archer, while Falconer’s drumming becomes more intricate.  The guitars serve more as percussive rhythm makers where the occasional jangle breaks stride to make way for the horns and some more slide guitar.  Seymour pleads and protests in and around the cacophony.  The LP’s original closer, “Little Chalkie” finds the guitars dripping and oozing down around another stand out Archer bass line.  Seymour’s desperate voice, now seemingly aware of his situation’s growing hopelessness, is drenched in echo and loses its bite – intentionally.

Payload’s four cuts are all killers and the EP has nearly as many exciting moments as all of The Jaws Of Life.  “Droptank” especially shows a group attempting a minimalist, mechanical method to their funk.  Archer’s bass and Falconer’s steady bass drum are the spine for the guitar, vocal, and keyboard appendages.  And keyboards are definitely brought to the fore at the sacrifice of the horn section.  But Seymour comes across as less focused: a wailing soul whose lament is echoed by a copycat synthesizer.  The last track, “Lumps Of Lead,” is also somewhat keyboard-heavy.  But Archer’s bass line, while still dominant, has dropped back and keeps to a more careful path.  He’s not hitting on every single beat as on other songs.  Put him together with very jagged and slashing guitars and you’d mistake this for a Gang Of Four track!

Hunters & Collectors didn’t register with me upon first listen.  I remember their bizarre video for “Talking To A Stranger” being shown on MTV in the early days, before MTV started to get stupid.  The band didn’t catch on with me until years later when their Human Frailty album was a hit on college radio in my Music Director years.  Shortly thereafter, the band’s star burnt out.  Any music collector has a list of several similar artists, who weren’t widely known except to the lucky few.  Add this band to your list and give a listen to their earlier work, if at all possible.  If you were at all into the sound of the German bands who’d worked with Conny Plank, you’ll find The Jaws Of Life right up your alley.  While Hunters & Collectors were a much more organic ensemble than most folks that Plank produced, you’ll see huge similarities stemming from the artists’ late 20th Century industrial age angst and disassociation from and mockery of the foibles of mankind.  Rock music as intellectual art statement?  Yes, you’ve experienced that before, but never exactly like this!