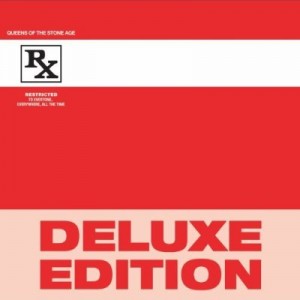 Though now thought of as being extremely prolific, guitarist/vocalist Josh Homme was really first introducing himself to a much wider audience with the sophomore release by his band Queens Of The Stone Age.  Issued in 2000, the album’s cult status had grown large enough that label Interscope felt justified in celebrating Rated R’s 10th anniversary with a deluxe edition.  In addition to the CD’s original 11 tracks, there’s now a bonus CD containing 6 B-side cuts from various promotional releases for Rated R and another 9 songs from the band’s 2000 set at the UK’s Reading Festival.  It’s a generous package and well-deserved.  Rated R is a spectacular album from the unlikeliest of sources.

Crawling from the ashes of the deflated stoner rock band, Kyuss, Palm Desert, California’s Josh Homme served duty as a touring guitarist for Seattle’s volatile Screaming Trees before deciding on a need for his own creative outlet.  After a start-stop stuttering of releases on independent labels, the band signed to major Interscope and unleashed Rated R on a world largely unfamiliar with Homme’s stoner rock roots.  Produced by Homme and Masters Of Reality mastermind Chris Goss, the album charts several disturbing and unexpected courses over its duration.  The weak are immediately culled from their audience with Track 1, the infamous “Feel Good Hit Of The Summer.”  With the only lyrics being a list of the most popular of recreational drugs, “Nicotine, Valium, Vicodin, Marijuana, Ecstasy, and Alcohol,” occasionally broken up by the reminder, “Co-co-co-co-co-cocaine,” Walmart saw fit to remove the CD from its shelves.  A loss, then, for the Walton-loyal as the track, like the rest of the album, reveals a subversive brilliance only previously hinted at.  “Feel Good” uses the best single note groove since the solo on “Cinnamon Girl” and never urges drug use.  It merely serves as a demented backdrop to the extracurricular activities sure to be enjoyed by some of the band’s audience as the summer begins.  Bonus points are given for asking Judas Priest’s lead shouter Rob Halford to lend background vocals.  And who can deny the exquisite sarcasm of the song’s title?

If this wasn’t enough to entice further listening, one of the best heavy pop songs ever conceived followed on its heels.  “The Lost Art Of Keeping A Secret,” employing a remarkably difficult yet seemingly simple vocal on the chorus and tasteful layers of extreme guitar distortion.  It easily ranks in my list of the Top 10 best songs ever recorded, it’s that devastatingly good.  Screaming Trees’ percussionist Barrett Martin caps the mood with a positively creepy vibraphone part throughout.

Josh tested his drumming abilities in a precursor to his role in later combo The Eagles Of Death Metal, while bassist Nick Oliveri stepped to the microphone, on “Autopilot.”  Nick’s stint with the group was very memorable and he’s been asked to contribute additional vocals on the Queens’ latest studio project due out later this year.  While he’s usually the guy screaming rather than singing, he displayed a mellower side on this song that shows him to be competent, though less talented than Homme.  Backing vocals from Screaming Trees frontman Mark Lanegan add excellent support behind Oliveri.  With the players back in their normal positions, including Nick Lucero on drums and Dave Catching on piano, “Better Living Through Chemistry” uses a minor key drone for the vocal line while Martin once again adds vibes and also additional percussion.  Homme’s voice and guitar are both, thankfully, given the royal treatment while he continues to outdo himself.

The quirky and intriguing “Monsters In The Parasol,” featuring original Queens drummer Gene Trautmann and a bizarre lyric describing some sort of psycho-sexual hallucination, is another left-field pop rocker.  Lanegan contributes lead vocals to “In The Fade,” which is a cross between the more bombastic moments of The Trees and an effects-heavy, bass guitar-dominated new wave track.  Homme’s guitars are at their most Tree-like here and it feels like an off-hand homage or wave goodbye to the brothers Van and Gary Lee Conner.  “Lightning Song” continues with the surprises as Homme sits down to the piano, Martin returns on percussion, and Dave Catching straps on the 12-string guitar for an odd instrumental.  The feel here leans on Led Zeppelin as they forecast “Kashmir.”

The B-sides on Disc 2 continue to show that Homme has moved well beyond the jamming, sun-baked dirges of his stoner rock past.  The high points come as two covers, The Kinks’ “Who’ll Be The Next In Line” and the dusty, new wave gem, Romeo Void’s “Never Say Never.”  The band seems to be having the most fun on “Never” as Homme deftly lays out harmonics and also uses his guitar to emulate the original song’s sax line.  Oliveri, meanwhile contributes baritone guitar and “asshorn” while the late Natasha Schneider of Eleven lends “fourths.”  What was at first a naughty song, banned from or edited for radio, is somehow made even naughtier by Homme’s faithful treatment.

The live set is somewhat disappointing only because it ends just as the Queens are really picking up steam.  From the moment the drums set up for “The Lost Art Of Keeping A Secret” to the band’s crushing and show closing, 10- and-a-half-minute version of the early Queens cut “You Can’t Quit Me, Baby” to the encore “Millionaire,” a screamer of a song from Homme’s Desert Sessions side project and featuring Oliveri on lead vocals, the band is virtually aflame.  Homme demonstrates a comfort with the material by playing slightly with the vocal to “Lost Art” and then really lets loose with his guitar on “Quit Me.”  The live mix is wonderful, despite the cavernous echo on the drums, and Homme’s honey-sweet voice comes through loud and clear.

If you are a classic rock fan and you think that nothing has been released in the past quarter century that’s worthy of your notice, think again.  Josh Homme continues to amaze and entertain with each successive project and nearly everything he’s involved in is worth seeking out.  Start your search with Rated R in the most complete package showcasing Queens Of The Stone Age material during their explosion into the greater public’s awareness.  After one listen, come back and tell me if I’ve steered you wrong.