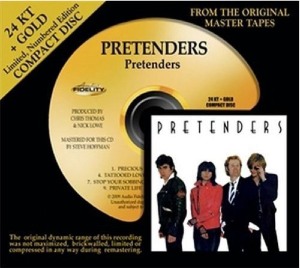 It’s 1980 and the world is still trying to figure out what to make of the recent punk explosion.  The rebellion against the arty pretensions and overblown drama that passed for rock & roll had been deconstructed and stripped to the barest elements.  Three chords, two minutes, and voices displaying raw emotion rather than vocal gymnastics were stealthily becoming the norm once again.  Ohio native Chrissie Hynde had left the stale confines of the U.S. some seven years earlier at age 22 to write about, work for, and jam with London’s punks.  Her taste in music and her songwriting abilities were now honed to where she was comfortable leading her own band.  This is the setting for one of the finest rock records ever recorded, the self-titled debut of Pretenders.  Although I haven’t owned this release for the first 30 years of its existence, I’ve recently acquired the Rhino/Audio Fidelity 24 K + Gold CD version and felt compelled to commit the emotions that I experienced upon listening to this jewel to words.

The stark cover to Pretenders, featuring the musicians dressed in only black, red, and white against a white backdrop, let us know that this is a band composed of four people with four very different personalities and centered on the red leather-jacketed and pouting Hyndes.  She stands between a dangerously dark Pete Farndon and a grinning, suited Martin Chambers with a playfully mysterious James Honeyman-Scott peering over the rim of his black sunglasses and also over Chambers’ shoulder.  The image, photographed by Chalkie Davies, seems to have captured the souls of the foursome with a device more crystal ball than camera.

Hynde is the dominant songwriter as well as the singer and rhythm guitarist.  Her leadership of the band is clearly established early on.  But Pretenders is a record made by a band, not a group of assembled musicians under complete direction of Hynde as Pretenders would later become.  With the opening attack of “Precious” and Honeyman-Scott’s buzzsaw guitar, we’re led to believe that this is a punk record.  But as Hynde steps to the mic, spewing lines about “shitting bricks” and telling us that she’s too precious and had to fuck off, unlike Howard the Duck and Mr. Stress who are trapped in a world they never made, we understand that the attitude may be “punk” but there’s a woman writing and singing these words, not a cartoon character.  Farndon’s bass and Chambers’ drums are clear and sturdy (sounding especially great on the Gold Disc version) while Honeyman-Scott is divebombing us with siren sounds and tasty little licks.  It’s as perfect as a song could get amid the tumult of rotting economies on both sides of the Atlantic.

Skipping through the tracks, we find one of many buried treasures in “Up The Neck.”  Here we’re treated to some of Hynde’s best poetry in a lyric detailing a violently erotic scene and a realization that this love affair may be the singer’s undoing.  But love it is and what may be will be.  Honeyman-Scott employs a perfect, chiming sound as a prelude to some impressive quintuplet pull-offs.  We also hear an early example of Hynde’s trademark fading vibrato vocals.  As good as the performances are on this cut, what follows is perhaps the best song ever conceived by this band – “Tattooed Love Boys.”  Weighing in at seconds shy of three minutes, there are more ideas flowing through than on some bands’ entire albums.  While Hynde’s words are filled with brilliant double entendre that still manage to keep the exact meaning obscured, the true star is Honeyman-Scott.  Backed by a locomotive rhythm from Chambers and Farndon, chattering maracas, and punked-up rhythm guitars, the lead breaks tackled by Honeyman-Scott grab from his bag of tricks at a dizzying pace.  His pick is scraping and the strings and neck are bending as he alternates with rockabilly barre chords.  The group is unbelievably tight while maintaining a balance between the heavy and the delicate.  The early MTV video was what convinced this little metal-head to pay closer attention to Pretenders, as Honeyman-Scott’s powers simply could not be denied.

One song that I’d nearly forgotten about is the instrumental “Space Invader,” composed by Farndon and Honeyman-Scott.  Farndon’s bass line does a great job at approximating the chugging sound of the “music” from the very influential video game, but the song itself is not all that spectacular.  It is, however, a nice example of the chemistry between the two ill-fated songwriters.

There is a trio of songs tacked on to Pretenders that saw release well before the record was issued.  All three are remarkable in their own way.  The Nick Lowe-produced cover of the Kinks’ classic “Stop Your Sobbing,” sounds very different from the other tracks on the album, which are produced by Chris Thomas.  Lowe’s approach has a more distant, echo effect that draws parallels between both the original version of the song and Motown girl groups.  It’s one more reason to love Nick Lowe, but the song doesn’t do much to give an identity to the group.  “Kid,” by comparison, contains all the elements that we typically recognize as being part of the Pretenders’ sound.  Honeyman-Scott takes a rockabilly stance for the most part, but he’s also very inventive with the lines he chooses to bridge the changes of the piece.  Hynde’s voices are as sweet and seductive as she’s ever sung, choked with sadness and employing her vibrato with completely charming results.  And speaking of charm, the super smash “Brass In Pocket” remains unlike any song recorded before or since.  I can remember way back to my teenage years and just how much impact the song had on girls that I went to school with.  It was huge!  There are so many ideas that contribute to the success of the song: the falsetto voices of the guys on the “make you notice” and “special” refrains, Honeyman-Scott’s irresistible and simple guitar lines, the bass way up high in the mix, and of course Hynde’s sexy and pleading vocals.  These three tunes are what built the foundation for Hynde’s career in the decades to follow and they remain fresh to this day.

There are longer, lesser known, more experimental songs on Pretenders as well, chief among them “Lovers Of Today.”  The pace is much slower on this ode to society’s expectations that young people’s love affairs are doomed.  The music forms an aural spotlight for Hynde before and after making way for yet another genius solo from Honeyman-Scott.  The lyrics are some of the most gentle crafted by Hynde and really point to the direction she would head in the wake of the tragic deaths of Farndon and Honeyman-Scott.

Everyone that was into music in any way in 1980 has a visceral reaction to Pretenders. In fact, I’d lay money on the fact that the emotions you experienced upon first encountering this band are rolling through your minds at this moment, whether you’re listening to the tracks right now or not.  The band was that different, that exciting, and that special.  The magic captured on their first release was never matched by anything they’d produced since, and, with very few exceptions, matched by any other artists on their debut record.  In 1980, few could imagine that 25 years into this rock-n-roll thing a band could come along and shake things up like Pretenders did.  I keep looking to other new artists to see if they may have what it takes to leave a similar legacy.