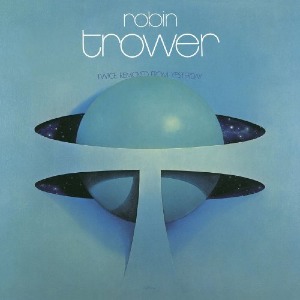 Robin Trower‘s debut solo album, Twice Removed From Yesterday, has finally been reissued on compact disc courtesy of IconoClassic Records. I’ve sung the praises of Trower and Twice Removed before, and am happy to have a digital backup to my well-worn vinyl copy of this underrated album. And, the CD is stacked with a bonus track, “Take A Fast Train.”

Twice Removed is moody, melodic and a revelation to those who had heard Trower only in his more supportive role as Procol Harum‘s guitarist. In Procol, Trower had the chance to spread his six-string wings on tracks such as “Whiskey Train,” but the band’s biggest successes relied on Matthew Fisher‘s organ stylings (“Whiter Shade Of Pale”) and lush arrangements (“A Salty Dog”). Eventually, Trower’s desire to merge the blues with rock was too much to deny and he struck out on his own, not knowing if he would ever be part of another recording. But, as the CD liners quote Trower, “Procol Harum were a keyboard band, and musically I was going off in a different direction. I had to find my own way to pursue that, and so I decided to form my own band.”

With little more than faith and the help of bassist/vocalist James Dewar and drummer Reg Isidore, the trio went to work recording a set of original material along with a stomping version of B.B. King’s “Rock Me Baby.” The songwriting – a partnership primarily of Dewar and Trower – showcased Trower’s controlled fire across some of the strongest material of the guitarist’s career. The brooding opener, “Can’t Wait Much Longer,” reunited Trower with Procol-mate Matthew Fisher (who also produced the original recording). For me, it is Trower at his best. One of the coolest parts about Trower’s playing is his ability to create “circular-sounding” riffs from a handful of notes. Unlike Tony Iommi, who would bludgeon and trample listeners with brontosaurus-like chords, Trower would paint mysterious musical pictures drenched in feedback and heavy in atmosphere. The compositions are not complex, but they drip with the pure emotion of the blues and imbue a sparkle to rock.

Dewar on the mike was the perfect foil for Trower’s potent compositions. His bluesy-soaked voice, often compared to Paul Rodgers, gives tracks like “Can’t Wait..,” “Hannah” and “Daydream” a gritty glimmer that’s hard to imagine bettering. And Isidore’s drumming is heavy yet smooth as quicksilver.

Success would follow Trower and Twice Removed, when Bridge Of Sighs was released a year later, but his first solo album remains the benchmark for Trower and the many hopefuls looking to meld blues and rock.