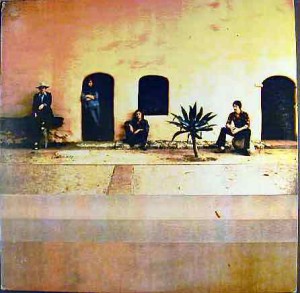 Bargain LP of the week

How much music can you get for a buck these days? If a recent trip to a local used record store proves right, you can get an entire album for $1. I walked away from that afternoon of vinyl diving with a handful of albums that included Poco‘s 1976 release, Rose Of Cimarron.The record was just a shade below Near Mint-, and after a good wash with my Nitty Gritty record cleaner it was ready for action.

The bulk of the songwriting on Rose Of Cimarron is courtesy of Rusty Young and Paul Cotton, with soon-to-be Eagle, Timothy B. Schmit, composing two of the 10 total tracks. But the album is worth a buck for the title track alone. “Rose Of Cimarron” is Rusty Young’s masterpiece, a shimmering and intoxicating country-rock epic that runs 6 minutes 42 seconds.

And what an arrangement! From the three-part harmonies of Cotton, Schmit and drummer George Grantham, to the angelic highs of Schmit that later lifts the song into the clouds, this rose never wilts. Guiding it all is Young and his bevy of stringed instruments,  including acoustic guitar, 12-string electric guitar, mandolin, banjo and some of the finest dobro playing recorded to tape.

It all goes by so fast, you’ll be sad to hear the final strains of the grand piano and strings that fade like tears, just as the rolling chords of a banjo join and fade as well.

Along with the mesmerizing title track, Young strikes all the right chords on the joyous pairing of  country/rock/bluegrass on “Company’ Comin” and “Slow Poke.”

Not bad for a buck!

One thought on “Poco-Rose Of Cimarron”