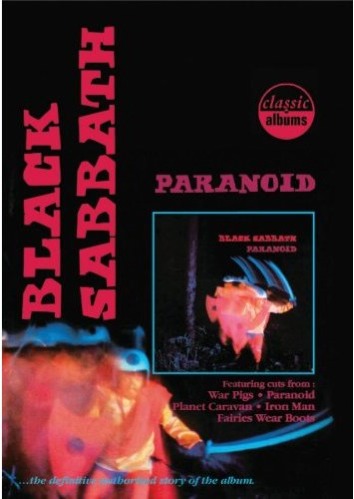 Is there any band that has influenced heavy metal like Black Sabbath? And is there another album that cemented the genre like Sabbath’s sophomore release, Paranoid? Early Sabbath is what many of the hardcore fans still cling to- those glory years from the debut self-titled Black Sabbath album through at least Sabotage, although I really dig Never Say Die and Technical Ecstasy, too.

But let’s get to the point: if it weren’t for Paranoid, and epics such as “War Pigs,” “Iron Man” and the title track, the fate of Black Sabbath would have been much different. As this Classic Albums DVD recounts, though, it seems as if the band was being led by some mysterious “fifth member” as the foursome of Ozzy Osbourne, Tony Iommi, Geezer Butler and Bill Ward wrote and recorded Paranoid. And what is most striking about this DVD is not just how original Sabbath were, but how musical.

Watching this DVD, and getting plenty of first-hand accounts from the band members and original recording engineer, Tom Allom, gave me new appreciation for the record and how bloody talented these blokes were. So much is made of how “heavy” Sabbath were-and certainly there was no precedent for such a sound-that the parts making up the music are often forgotten. Remember, Sabbath were really a power trio-Geezer, Tony and Bill played instruments and didn’t sing (I know Ward had a cameo later in the band’s career) while Ozzy wove his strange magic over the ever-changing riffs and rhythms. Lost in it all was the fact that Butler and Ward were a swinging rhythm section, able to turn on a dime from the slow gloom of the “War Pigs” intro into the almost Big Band sounds of “Fairies Wear Boots.” Laugh for a second, but go back and really listen and you’ll hear the influence of Ward’s hero, Gene Krupa, and not just on that track. It’s no wonder, listening to Ward recount his childhood growing up where his parents staged “jazz parties” on Saturday night, and the young Bill awakening to explore his father’s friends “traps” with near mystical rapture.

Butler, too, gets his due when the original 4-track tapes are manipulated by Allom so we can each band member playing his respective parts to the Paranoid tracks. Butler’s bass lines-long and flowing, like a heavy metal Jaco Pastorius-are the thread that sew these tracks tight. Whether he was doubling Iommi’s guitar lines for emphasis or running wild underneath a solo, Butler was metal’s answer to Free’s Andy Fraser.

There’s no other guitarist-in any genre-responsible for more classic riffs than Tony Iommi. I’m not just talking about main riffs from “Paranoid” or “Iron Man,” but the uncountable secondary and sub-riffs that complete the songs. That doesn’t even take into account the classic solos. How many guitar solos can you hum note for note? I bet the outro to “Iron Man” is one of them. I love listening to Ward and Butler thrash about, doubling the song’s time while the ringing open notes of the intro buzz about. Then, Iommi breaks in with the start of the solo, really another riff that gets its power from the accented notes, just before he dives full in with a barrage of bends and triplets that sound like they’re destined to derail but never do.

Not to forget Ozzy. As I said earlier, the original Black Sabbath seemed to be guided by larger forces and Ozzy’s melody lines and vocals are part of that darker cosmos. The DVD showcases some of Ozzy’s early attempts at creating lyrics in the moment as the three others played around him. Check out the early incarnations of “Planet Caravan” and “Paranoid” to hear how adept Ozzy was at locking into and interpreting the music around him. It’s uncanny. Just like the band.