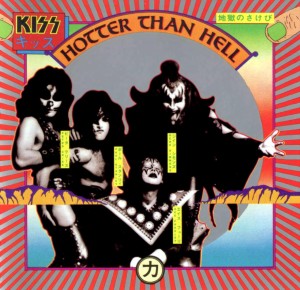 Continuing on with our discussion of the KISS discography, Classicrockmusicblog.com publisher, Todd Whitesel, and I turn our attentions to the band’s bombastic, yet commercially disappointing second album, 1974’s Hotter Than Hell.

For many years, Hotter Than Hell was the gaping hole in my record collection.  The details of how I finally acquired it are shrouded in the mists of time, but I’d wager a guess that I’d purchased it through the Columbia Records Club.  Youngsters may not be familiar with the CRC, but it was one of those deals where you paid a penny to get umpteen records and only had to pay postage for them.  I joined, quit, and rejoined this “Club” and the similar RCA Records Club many, many times and picked up a ton of excellent albums in the process.

I was familiar with some of the songs on Hotter Than Hell from subsequent “best of” and live records (Double Platinum and Alive, reviews forthcoming), but wasn’t aware of the deep album cuts and was shocked to hear how raw this record was in comparison to the band’s debut.  Let’s face it; in the ‘70s bands would crank out two or three studio albums each year in between merciless tour schedules.  KISS was no exception and they felt they had to prove themselves to audiences and keep product in the marketplace.  Ultimately, KISS proved their talents best on stage (at first) rather than at the checkout counters.  And in listening to KISS’ sophomore release, it’s no wonder.  Like the A&R man in Tom Petty’s “Into The Great Wide Open” said, I don’t hear a single.  That doesn’t mean the songs aren’t stellar or, and this is where the esteemed Mr. Whitesel and I will disagree, even superior to the material found on their debut.  I’ll pick out a few of my favorite moments to discuss and leave room for Todd to chime in on his.

The finest moment on Hotter Than Hell has got to be the Ace Frehley-penned, Gene Simmons-sung “Parasite”.  This song foretells the coming of speed metal about 10 years before its actual arrival.  Frehley’s lead riff, sans accompaniment at the opening of the tune, seems not to fall within frame the band eventually sets for it.  It’s fast and off-kilter, raw and scratchy.  Peter Criss was at one time an excellent drummer and here’s Exhibit A.  Simmons’ vocals are purely demonic—great evidence that he was starting to fully immerse himself in the stage character he’d created.  Aside from the powerful riff, Frehley’s solo is one of the best of his career.  It’s a short burst of spazzing sixteenth notes and bending strings and not something we’d heard much in the mid-70s.

Speaking of the dark Mr. Simmons, give a listen to the perversion that is “Goin’ Blind.”  It’s the story of a doomed love affair between a 93-year old man and a 16-year old girl.  The chorus is completely irresistible and Simmons is in fine voice, but the chord changes attempt to incorporate every minor key known to man.  But the song is a good example of the lack of sharpness in the recording.  I happen to like the rough edges, but I’m weird that way.  What’s confounding about the change in the sound is that the band is working with the same producers and recording engineer that guided their first record.  No matter, “Goin’ Blind” is pure gold in my book—one of my favorites.

Play on to the record’s title track and Paul Stanley once again singing of a woman that’s both smoking hot and unattainable.  The catch this time is that the woman is married, not spurning Paul out of spite.  Poor Paul!  The band’s performance is quite good, but I can’t say that it’s really one of their best, nor am I certain of the reason why they named the album after the song. Putting the word “Hell” in your record’s title was a sure way to keep it out of the hands of kids with overprotective parents.  Who knows what may happen if those kids actually listened to the music? (Insert fire and brimstone here).

The record’s flipside contains some of the oddest moments KISS committed to vinyl.  Of course that means I love it all the more.  Opening with the stunning burst of guitar and a little cowbell for good measure is “All The Way.”  This is Simmons getting fed up to the point of getting pushed “All The Way.”  His voice and especially his bass are outstanding.  In fact, Simmons used to look for moments to put in little bass fills and this song with its neck slides presents an element that I’d wished he’d used more often through the years.

One more song that I’d like to mention is the Stanley-written, Criss-sung “Mainline.”  I used to love Peter’s lead vocals, and though he usually only stepped to the spotlight once per album, “Mainline” remains one of his best turns.  Much of this has to do with the chord changes written by Stanley and the “Baby won’t you give it to me one time” chorus.  It’s a showy moment for fans of The Faces and The Rolling Stones (which both Stanley and Criss were).  Really the whole band is in fine form on a song that’s essentially a throwaway.

So, all in all, I feel Hotter Than Hell is a much more exciting album than their first, but it’s hampered by the murky sound quality.  Don’t get me wrong, I like the debut a well, but Hotter Than Hell is a better example of a band having a ton of fun while trying to earn a buck. Over to you now, Todd, for your take.

Though I said before that KISS’ debut album remains my favorite studio recording of the band, Hotter Than Hell has two of my favorite tunes. Mark already mentioned the strange and disturbing “Goin’ Blind,” so I’ll just add that the lumbering pre-historic riff gives the tune even more impact. When Simmons sings, “I’m 93, you’re 16…” one must wonder, though, which of the two people is truly goin’ blind! My other fave is Paul Stanley’s “Got To Choose.” It’s a simple 3-chord riff that sounds a bit like “Jumpin’ Jack Flash” played at half-speed with Simmons adding long bass slides for accent. Check out this YouTube video of KISS playing “Got To Choose” in 1975, live at Winterland for a peek into the past.

When I first heard “Parasite” I didn’t like it. The speed and angularity of the guitar riff along with Simmons’ bellows seemed far away from anything the band had done before, and “Parasite” sure was. It was a groundbreaking track, though, and as Mark rightly asserts, “Parasite” was the precursor to speed metal and the manic offerings from bands such as Motorhead. Listen to “Parasite” and then imagine Lemmy singing it.

In the category of songs that feature the cowbell, flip over to Side 2 for an overlooked classic in “Watchin’ You.” Another thunderous, revolving riff builds to a crescendo as Simmons sings/wails in wild desperation. Those performances make the early KISS albums bristle with energy and rawness that were practically gone by Love Gun.

I have a soft spot for “Let Me Go, Rock ‘N Roll,” too, for its anthemic quality and songwriting. Simmons was always found of using the word “baby” in his lyrics, and in “Let Me Go…” he rises to untold heights, showering us with 16 instances of the word in 2 minutes and 15 seconds. According to my calculations, that’s a baby being born every 8.4375 seconds! Don’t even talk about putting his baby in a corner!