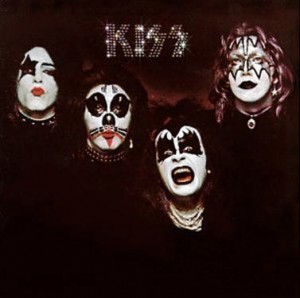 Somewhere in the distance, an inbred kid is playing a series of beckoning banjo chords…

Anyone who knows me well understands that I have had a long-standing love/hate relationship with the band KISS.  After discussing this affliction with ClassicRockMusicBlog.com publisher, Todd Whitesel, we’ve decided to embark on a journey to define exactly what both of us love and hate about the group.  Some of these things, baffling television appearances, excessive marketing, abbreviated live shows, performances below that of their opening acts, are incidental.  We’re going to focus, instead, on KISS’ recordings in a chronological manner.  So, Sherman, please set the Wayback Machine for the year 1974 to help us examine KISS’ debut album.

Actually, in 1974, I was only 7 years old.  My love for rock music had not even begun.  But in 1977, a classmate of mine sold me KISS’ first record and Dressed To Kill for $1.00 each.  These were the first rock records I’d ever owned and I still have them to this day.  This was a very rebellious move for a fourth-grader in Central Wisconsin, as many parents would not even allow their kids to listen to “such garbage.”  It was my money and my parents never asked.  My fate was sealed.

Anyone who wasn’t into rock music would not “get” KISS and what they were trying to accomplish.  In fact, the photographer that snapped the cover photo (in a very Beatles-esque manner, by the way) thought they were some sort of circus clowns and he wanted to surround them with strings of balloons.  The lyrical content was waaaaayyyy over the heads of most of the underage fans and the artistic approach of using Kabuki-style make-up and New York Dolls’ gender-bending costuming was lost on squares living outside of the Big Apple.  Still, the music persevered despite stagnant record sales.  The songs written for their debut album are very well known by music fans and continue to be included in the set list on recent KISS tours.

If I were to wax rhapsodic about this album, I could easily write a page on each one of these songs.  The emotions and memories brought to life are numerous, but I’d easily lose your interest amid my foggy nostalgia.  I’ll choose a few highlights and then turn it over to Todd for his response.

The whole thing began with a song co-written by Paul Stanley and Gene Simmons called “Strutter.”  This will always be considered a KISS signature tune, with its lyrics about a woman who makes herself unattainable while driving on-looking men insane with her ravishing beauty.  The vocals are actually not some of Stanley’s best, but Ace Frehley’s guitar riff and solo are solid as is Simmons’ bass line.  Frankly, I’m a bit perplexed that it figures so high in their list of true classics.  The best thing I can say is that each member of the band is able to display their own identity and their parts are very well-recorded by producers Kenny Kerner and Richie Wise and engineer Warren Dewey.

As would be the case with KISS throughout their career, a Stanley-sung song is followed by one sung by Simmons.  Stanley is often considered their lead singer, but Simmons is usually the guy singing their “dirtier” songs and “Nothin’ To Lose” certainly fits the bill.  “Nothin’ To Lose” actually has Simmons singing the verses with drummer Peter Criss singing the chorus.  Both Simmons and Criss have their own distinctive rasp to their voices, however.  Frehley’s lead line owes a lot to his hero Keith Richards and his solo takes quite a few left turns.  The background vocals on the chorus: “You got got, nothin’ to lose,” which feature Simmons prominently, and the honky-tonk piano are probably the most memorable elements and they really allow Simmons to wear his Beatles love on his sleeve.  All this in a song, that Simmons reveals in later interviews, for a song about anal sex.

Stanley steps to the mic once again for his song “Firehouse.”  Again, this is a song which the band continues to perform live to this day.  Stanley often chose to sing more “romantic” songs or songs about women that were so hot he couldn’t stand it anymore.  “Firehouse” is the perfect example of the latter.  He’s only cooled off after the cheesy fire alarm sound effect near the end of the tune.  Although Stanley’s voice delivers the lead vocal, Simmons is very prominent in the background—one of the things I love about their early recordings.  Gene may be The Demon and he may have bedded thousands of women, but he’s a damn fine singer as well.

Skipping to the last track on side one, a lesser known gem called “Let Me Know”, we have a nice example of how Simmons and Stanley used to trade off on vocals.  Despite being written by Stanley, the song lets Simmons sing the verses.  This is may be one of their most early-Beatles-influenced songs in terms of the lyrical content.  But then, after a nice a capella spotlight, the jam kicks in. These guys were true rockers and they took us out of side one with a spectacular cascade of drum fills, rhythm groove and Frehley’s amazing lead.

If you had no idea that Gene Simmons was a kick-ass bassist, just give a listen to “100,000 Years.”  His noodling, which sets up the song for no more than a measure, sent us straight into the darker regions of the KISS catalog.  Frankly, I have no idea what Stanley is singing on this song that he’d co-written with Simmons, but I couldn’t care less.  Although more structured than anything recorded by Aerosmith, “100,000 Years” sounds a bit like them and blows them away with the performances.  Criss has room to show off, Frehley’s solo is incredible once more, and Stanley’s indecipherable vocals are some of the best of his career.

And now over to you, Mr. Whitesel.  Do you hate this record or mostly love it like I do?

Wow, this takes me back to the mid-70s when I was first discovering rock  music. Like my colleague, Mark, I was also an apple-cheeked lad of 7 when KISS’ debut was released. It wouldn’t be until years later that I listened to the album proper, but I already knew 70% of the record through repeated listenings to KISS Alive! My next door neighbor and best friend, Steve Forte, had an older brother with a small but excellent record collection. As well, Steve’s dad had a sweet hi-fi system that we would get control of on many a weekend. I remember spinning two records over and over again: KISS Alive! and Kansas‘ Leftoverture. They remain two of my faves to this day.

Mark has already touched on “Strutter” and “Nothin’ To Lose”-both classics in the band’s catalog. I would only add that the riff to “Nothin’ To Lose” is one they don’t write anymore. Like so many of the early KISS gems, the guitars spin like spider webs or fractals; the beauty and form becoming more apparent with each verse and chorus.

What sets KISS’ first album apart from anything that followed or what their peers were doing is the hell-fire energy of the songs and playing. Listen to “Deuce” and it’s like hearing a guitarist “finding” a riff and a band stumbling upon a song instead of writing one. But it’s one of the most assured tunes Gene Simmons, Paul Stanley, Ace Frehley, and Peter Criss ever committed to tape. Often forgotten among the makeup and stage theatrics are the songs. In 1974, KISS wrote great rock songs with memorable riffs and instantly recognizable guitar solos courtesy of Ace Frehley.

And speaking of Ace, the subtle-shifting riff that bottles “Cold Gin” is  one of the things that made KISS so great. Frehley probably plucked it out one afternoon in 30 seconds, but that riff lives on for its grit, melody and attitude. The curious dichotomy of Gene Simmons-an adamant teetotaler-playing along to a tune advocating grabbing a bottle of the cheapest hooch is Hollywood “proof” that music is a business and not a religion. (The band-and fans-would suffer later for such views.)

KISS were never a group to write grand (or any) instrumentals, so “Love Theme From Kiss” retains a special place in my heart. The “theme” is redundant and never fully develops but I can still call on the melody and for that I’m grateful.

But it’s track 10, the final cut on Side 2, that cemented the deal for me. Whatever KISS were or would become, the band brought it big time, brought it all, with “Black Diamond.” Paul Stanley’s lament-laden minor-key arpeggios paint a starkly black picture before the startling heavy riff runs the song along the edge of a cliff. But it gets crazier. Peter Criss comes in with an absolutely manic vocal that sounds like he was gargling with a bucket of Gillette razors just moments earlier. As Criss’ cries fade, Frehley’s solo careens over Simmons’ bass broodings like magma, burbling from the center of the earth. Just when you think the song is over, comes the slow, dirge-like mantra that announces the glorious coda of “Black Diamond,” chord by tortured chord.

In 1974, there were few acts bringing music this savage to the public. Black Sabbath was heavy but rarely this straightforward. Nazareth had unleased Loud ‘N’ Proud that same year, and threw a mean punch with “Go Down Fighting,” but even that uppercut retained a bluesy-ness that didn’t translate into the sheer pandemonium of “Black Diamond.” King Crimson’s Red had its own terrifying aspects, but more in the Robert Heinlein, sci-fi vein.

So, to answer your question Mark (pun intended), I love this album.

I can’t imagine growing up without this music, and I truly feel sorry for those who weren’t there the first time ’round.

The heaviest and best KISS album is called KISS. You wanted the best…