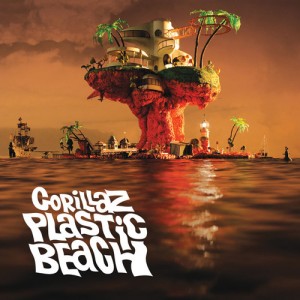 Blur lead singer Damon Albarn and cartoonist Jamie Hewlett returned with their third release under the Gorillaz banner, Plastic Beach, just a few months ago.  While this very modern mash-up of staggering visual imagery, hip-hop wordplay, Swedish electro-pop, chamber orchestration, and traditional Syrian/Arabic music might not seem, at first thought, to be of much interest to the classic rock followers that frequent this site, there are some very notable contributions from veteran rockers that might cause our dear fans to pay attention.

So how does the collaboration between a Brit pop vocalist and the artist responsible for creating the character Tank Girl constitute a band?  Well, first you must understand that Gorillaz is a “virtual band,” meaning that the band members appearing in all promotional materials are cartoon characters drawn by Hewlett.  Hewlett is also responsible for all visual aspects of Gorillaz, from the stage design to the creation of the 8-foot Plastic Beach “miniature” used in the filming of the album’s narrative.  Hewlett and Albarn work together to generate the storyline visited over the course of their releases and Albarn serves as a musical director when he’s not also singing, playing guitar, or programming keyboards.  The cast of contributing musicians has varied widely on all Gorillaz releases, with past performers including Debbie Harry and Chris Frantz and Tina Weymouth of Talking Heads and Tom Tom Club fame.  With Plastic Beach, Gorillaz went all out when bringing musicians of disparate backgrounds together.  The record features American hip-hop legends Snoop Dogg, De La Soul and Mos Def, Super Furry Animals’ lead singer Gruff Rhys, rock and roll chameleon Lou Reed, R& B veteran Bobby Womack, the first collaboration in decades from former Clash members Mick Jones and Paul Simonon, and, most shockingly, the leader of the long lasting British punk group The Fall, Mark E. Smith.

Plastic Beach is a concept record discussing consumer culture and its unavoidable production of waste materials.  The concept is visited as the cartoon Gorillaz are cast ashore on an island consisting of all the junk drifting through the world’s oceans, now washed clean, piled high, and painted pink.  We’re handed a multimedia project with high profile musicians, true, but does the CD deliver the goods?  My vote is that the three years spent developing and recording Plastic Beach have yielded one of the most entertaining and thought provoking releases of 2010, with layer upon layer of complexity that continue to reveal the project’s scope with each repeated listen.  Goods delivered!

From the opening cries of seagulls atop a moving performance from the U.K.’s Sinfonia ViVA and leading into Snoop Dogg’s turn at the mic with backing from Chicago’s Hypnotic Brass Ensemble on “Welcome to the World of the Plastic Beach,” we know that we need to settle back for a tale being told.  The backing track on the record’s first single, “Stylo,” comes across as some kind of gloomy disco a la Wax Trax Records circa 1987 before Mos Def brings a hauntingly treated rhyme when Albarn and Womack aren’t trading lines.  Womack’s voice is especially impressive as it cuts straight through the fog.

The song “Superfast Jelly fish” is a genius stab at a pop tune with De La Soul’s rhyme about fast food made from squiggly aquatic creatures, a fortified drum track from Gabriel Wallace and a sugar-coated chorus sung by Rhys.  Sampled sperm whales are used to further dislocate our ear drums.  This then makes way for a beautifully shimmering collaboration between Albarn, Swedish pop group Little Dragon and guitarist Simon Tong (best known for his time in the UK’s hallucinatory band The Verve) on “Empire Ants.”

“Where’s North from ‘ere?,” mumbles Mark E. Smith at the opening of “Glitter Freeze,” as synthesizers percolate around him.  His contribution is not extensive, but he’s perfect in his role as a mist-shrouded soothsayer from beyond.  Smith’s demonic laugh draws our attention away from the electronic sea creatures battling in the distance to a drum machine’s cadence.  One star turn leads to another as Lou Reed, to a simplistic piano and synthesizer line, tries to describe “Some Kind of Nature.”  Reed, who can sometimes sound more mechanical than the machines in his rhythm track, doesn’t disappoint in that respect.  He’s another excellent choice for Albarn and Hewlett as they searched for narrators of this post-apocalyptic, post-consumer sea shanty.

Two Albarn solo tracks follow Reed’s: “On Melancholy Hill” and “Broken.”  These serve as demonstrations of Albarn’s conceptual vision, providing lyrical content necessary to the tale before setting us up for the incredible “Sweepstakes.”  Mos Def, backed by an electro-reggae rhythm and multi-tracked, monotone rap that wouldn’t seem out of line on an MIA CD, slowly builds in intensity through the song’s five minutes.  Stealthily, the Hypnotic Brass Band and Gabriel Wallace creep into earshot before ducking back into the shadows.

The title track is saved for the Jones-Simonon reunion; one that proved so fruitful that the duo was asked to join the Gorillaz touring ensemble.  The song’s artificial voices, heavily processed guitars, and ultra-heavy bass throb make it the pinnacle of Plastic Beach.  To ease us down and out of the record, Albarn reunites with Little Dragon on the cut “To Binge” and a playful duet with their singer Yukimi Nagano before making way once more for Womack on “Cloud of Unknowing.”  This song, filled with sadness, hope, and love contains one of Womack’s most soulful and powerful deliveries of his career.  “Pirate Jet” finishes the disc on an up note and the comical sounds of horror movie organ, Jew’s harp and rolling ocean waves.

Plastic Beach certainly won’t be everyone’s cup of grog, but it has enough diversity to satisfy most people at least some of the time.  If you’re going to make the purchase, spend a few more of your hard earned doubloons and cast your spyglass for the Virgin/EMI Experience Edition, which includes slightly different, yet no less gorgeous cover art, a Bonus DVD of the making of the record (highly entertaining and revealing), and codes for exclusive access to all sorts of goodies on gorillaz.com.