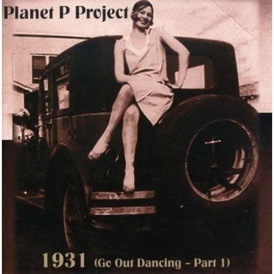 1931 (Go Out Dancing – Part 1) is the first record in nearly 20 years from keyboardist/multi-instrumentalist, Tony Carey that is credited to his Planet P Project.  Although released on a handful of different labels since 2003, it’s recently been re-released by Renaissance Records.  While Carey has been successful in Europe as a solo performer and enjoyed brief chart success stateside with “A Fine, Fine Day” in the early ’80s, he had shelved his Planet P Project following its own chart success with “Why Me?” and declining interest from both artist and audience on subsequent releases.  While Carey the solo musician focuses on rich stories in his songs and presents more of a pop approach, Planet P Project displays equally rich stories that reveal themselves through science fiction settings and concept albums.  Thus, a unified theme surrounds each Planet P release and 1931’s centers on the reaction, stateside and in-country, to Nazi Germany’s rise during the 1930s and changes occurring on both sides of the Atlantic and the Pacific during and after World War II.  The lyrics describing the common person’s emotional responses to the cults of personality that were Hitler, Roosevelt, Stalin and Tojo are extremely relevant in the early years of the 21st Century.

The disc opens with narration on “My Radio Talks To Me,” setting the stage in both Detroit and Berlin.  The song’s protagonists rush home from work in a pre-Internet, pre-television world to listen to Father’s message.  It’s 1939, and Father tells the listening families what they want and need to hear.  The song draws parallels to the desires for leadership and guidance in both the U.S. and Germany as the radio listeners are drawn in to the messages of their respective Fathers.  This is spooky stuff that requires us to question the power of both charisma and media as they are used to sway the masses.

What follows logically is a call to arms on “Join The Parade,” as lures of machismo and intolerance compel the downtrodden to assemble unknowingly for war.  A pulsing synthesizer, menacing didgeridoo and programmed drums back Carey’s exceptional vocals.  The disc tracks on as it discusses the rally to battle, the herding of undesirables and the growth of bigotry amongst the citizenry of the main combatants of the War.  Points of view are offered from those partaking in the atrocities and those affected by them.  The music remains fresh and is particularly seasoned by various flavors of European pop music.

The theme switches dramatically on “The Other Side Of The Mountain,” told from the point of view of Timothy McVeigh as he plots to engineer what he believes is an inevitable war of races and isms in the heart of his native country.  Carey is now demonstrating how media and messages have affected the disenfranchised several decades after the fall of the Axis Powers.  He shows us that the same messages that manipulated the world to engage in destruction are used once more by different mass media and to different horrific effect.  “Waiting For The Winter” jumps back into the mind of a soldier who anticipates that the change in seasons will force an end to the assault on Russia at Germany’s Eastern front.  It’s a quieter, somber piece that captures the thoughts of a man faced with the realization that nature will harshly put an end to mankind’s games.  “Believe It” is the song from which Carey took the title of the album.  It’s a God’s eye view of the growing anger and power within a modern day skinhead leader.  Bent on destruction, the man compares himself to a Nazi using violence to alter his world to one more to his liking.  Carey warns us that there’s nothing in place to prevent what happened in 1931 Germany from happening elsewhere today.  In fact, it might even be easier in this day for a fear monger to bend a populace to his will through use of wider-reaching media sources.

Although 1931 is based on grim reflections, Carey uses mild humor in places to soften the mood.  We’re still left with a frightening and cautionary tale written by an American who has spent the majority of the last three decades living in Germany.  Carey uses Planet P and its alteration of mood and pace as would a master wordsmith crafting a tale of modern historical fiction.  And as any author who knows that he’s onto a good idea, Carey has constructed 1931 as part one of a trilogy.  Go Out Dancing Part 2 – Levittown is now available as a limited edition pre-release with a wider release to follow later this year.  Part 3 is also soon to follow.  G.O.D. marks a return to the glory days of the concept album, where the art of recorded music is elevated to a tool with which to expand upon an idea, or sequence of thoughts that share common ground, throughout the course of the entire recording.  Carey takes it one step further by presenting the concept in three parts and over three releases.  I’m now anxiously awaiting the continuation of this tale and will be exalting the return of the nearly forgotten Planet P Project.