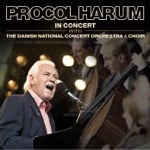 One of Classic Rock’s most beloved bands, Procol Harum, will have its In Concert With The Danish National Concert Orchestra And Choir released on CD (Eagle Records) and DVD (Eagle Vision) May 26.

The CD (retail sales price $13.98) features the following 10 songs: “Grand Hotel,” “Something Magic,” “Homburg,” “Fires (Which Burn Brightly),” “Nothing But The Truth,” “Into The Flood,” “A Salty Dog,” “Sympathy For The Hard Of Hearing,” “A Whiter Shade of Pale” and “Conquistador.” Two of the songs, “Into The Flood” and “Sympathy For The Hard Of Hearing,” have never been released.

Procol Harum is seen as one of the prime progenitors of what ultimately became Progressive Rock or Symphonic Rock. Its 1967 “Whiter Shade Of Pale” has been an FM Radio staple for 42 years. Combining sweeping orchestral flourishes with bluesy minor-key melodic inventions atop mysterioso lyrics that begged different interpretations, the band’s swagger was only exceeded by its virtuoso chops. Brooker started the band in 1967 with non-musician poet Keith Reid, who, like Bernie Taupin with Elton John, plays no instrument nor sings, but has written or co-written every single Procol Harum song that is not a cover since the band’s inception.