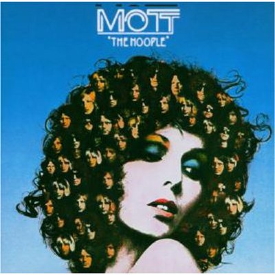 The Hoople is the third of a trio of spectacular records issued by glam-rock superstars, Mott The Hoople.  Discounting a final live album in late 1974, The Hoople is vocalist Ian Hunter’s last attempt at working out his showy, ’50s-style rock and roll within a band context.  Coming hot on the heels of their phoenix All The Young Dudes in 1972 and the sometimes more incredible Mott, in 1973, The Hoople faced the challenges of a line-up shake-up and rose mightily to the occasion.  Founding guitarist Mick Ralphs had left to found Bad Company and touring organ player Mick Bolton had also dropped out, leaving pianist Morgan Fisher as the sole keyboardist.  To replace Ralphs, the band enlisted former Spooky Tooth axe slinger Luther Grosvenor, who was credited as “Ariel Bender.”  The dynamic had shifted to focus squarely on Hunter and the rhythm section of bassist and occasional guitarist Pete “Overend” Watts and drummer Dale “Buffin” Griffin.  The three remaining original members assumed production duties for 1974’s The Hoople and successfully attempted to maintain momentum.

What were concocted on The Hoople were the foundations for Hunter’s own glitz of a solo career clad amid lyrical and sonic experiments and a clutch of guest musicians.  The points which later became references for fellow musicians are numerous.  Witness “Alice” and her dense story out of the playbook of Lou Reed.  Her story was so thick that Hunter only ever performed the song live on one occasion.  The studio version features honky-tonk piano, honking sax lines and slippery slide guitar from “Bender.”  Hunter hadn’t completely taken command of the record and even occasionally stepped right off the stage.  Watts’ remarkable “Born Late ‘58” features not only his solid bass anchoring the piece but also his potent Rickenbacker bashing and even his lead vocals.  “Bender” again turns in a stellar performance on slide.  The song is so great that Hunter suggested it be released as a single, and The Kinks seem to have stolen bits of it about 10 years later during their Arista rebirth.  Roxy Music’s Andy McKay turns in an un-credited and rocking performance on “Pearl ‘n’ Roy” while Hunter bitches about the sad State of the Union Jack.   Ralphs is still lurking about here and there, but mostly singing rather than slinging.  Better known songs such as “The Golden Age Of Rock ‘n’ Roll,” “Marionette,” “Through The Looking Glass” and “Roll Away The Stone” are all here as well, but digging deeper into The Hoople reveals a gem of an album and a band trying hard to hold it all together.

Seek out a CD version of the record to get the Bonus Tracks.  Sony BMG’s Iconoclassic release from 2008 has seven extra cuts that tell an even better tale of what Mott The Hoople were up to at the time.  Highlights include the non-LP single “(Do You Remember) The Saturday Gigs” and the guide mix titled “The Saturday Kids,” both featuring Grosvenor’s replacement, Mick Ronson!  There’s also a live from Broadway fake-out where Hunter starts off with a few lines from Don McLean’s “American Pie” before the band thunders right into “The Golden Age Of Rock ‘n’ Roll.”  The pairing makes a lot of sense given that both McLean and Hunter are singing about the day the music died.

The Hoople may be the last slice of an era where men could wear top hats and shiny, gauzy things and put on something more akin to a party than a rock and roll show each night.  An exhausted Hunter would soon leave, taking Ronson and The Hoople with him and leaving only Mott behind.  But The Hoople, though criminally undervalued, is exhibit A in the freak show that’s not been through town in ages.