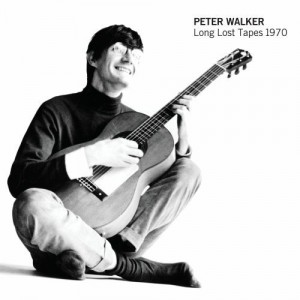 The Long Lost Tapes 1970 were my first introduction to guitarist Peter Walker, and I’m grateful for the meeting. This is an important release from a musician who somehow evaded the eyes and ears of the general populous. Fortunately, we now have these recordings Walker made at Levon Helm‘s home in Woodstock, N.Y., during an impromptu session with the help of a few friends, notably drummer Maruga Booker and tabla player Badal Roy. Up-and-coming studio whiz Eddy Offord was there to capture the proceedings. The tapes then sat for nearly 40 years, unheard and unappreciated, before being recently  resuscitated by Walker.

Walker’s early music owes a deep debt to Indian music, no surprise as he studied with Ravi Shankar in 1967 along with fellow Shankar pupil George Harrison. He then went to Spain to study flamenco and the sarod under Ali Akbar Khan.  All these styles and influences rise to the surface on Long Lost Tapes. Mesmerizing and beautiful are two words that constantly came to mind listening to these exotic compositions.

A sprinkle of bells and chimes and a sitar-like acoustic guitar weave the opening story line on “Meditation Blues,” a “blues” in name only, filtered through a middle-Eastern lens. Listen to the tabla drum come in and out of the picture like a diving bird. “Camel Ride” is an atmospheric journey across the Sahara, conjuring images of Moroccan markets and the heavily perfumed air. The arrangement is a masterpiece, with flute trills and accents floating above Walker’s understated guitar. Listen closely, too, for some remarkable bass playing by the singly named Rishi. “City Pulse” is an electrifying number, and the highlight of the record, with a fierce, circular drum pattern ringing Walker’s guitar voicings. “Missing You” reminds me of Tim Buckley‘s great song “Buzzin’ Fly,” transformed here via rapid percussion and Walker’s modal playing. Walker’s sole vocal performance is heard on “102nd Psalm,” a meditative raga with woodwinds and flute fluttering throughout. “Mellowtime” is a tranquil coda, somewhere between Sun Ra and John Coltrane. Walker strums thick chords as Roy and Booker devoutly beat on their respective percussives.

Fans of Davey Graham, John Fahey, Shankar, Tim Buckley, Donovan, Paul Horn or the Grateful Dead will want this album – must have this album. Sit on the floor, cross your legs, close your eyes and let the sounds take you away.