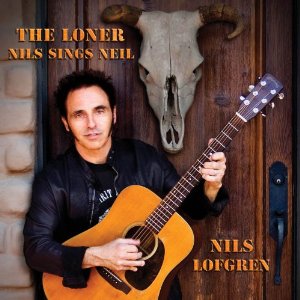 Nils Lofgren knows Neil Young‘s music as well as anyone, because he was there. As Young’s star ascended higher and higher in the 1970s, Lofgren was by his side, playing piano and guitar in the various guises of Young’s backing band Crazy Horse. Those experiences left a huge mark on Lofgren, and his tribute to Young, The Loner: Nils Sings Neil, shows a deep understanding and respect of the master’s music. Lofgren approaches this record, not seeking to reinvent Young’s music or bring attention to himself, but laying the focus solely on the songs. With a stripped-bare, all-acoustic format, we’re shown the basic framework of the tunes only; that they stand so tall, is further proof of Young’s extraordinary songwriting.

Lofgren’s song choices make it clear that he’s not just a friend of Young’s, but a fan, too. Instead of trodding over already well-worn numbers such as “Heart Of Gold” or “Cinnamon Girl,” Lofgren digs deep into Young’s vast catalog and pulls out some true nuggets, including “Flying On The Ground,” “Don’t Be Denied,” “Winterlong” and “World On A String.” As such, this isn’t an album for the casual fan, but if you know these tunes you’ll likely find a lot to like in Lofgren’s interpretations.

The beautiful opener “Birds,” finds Lofgren revisiting a tune on piano – one he originally played on nearly 40 years ago for Young’s phenomenal album After The Gold Rush. What’s striking is how much Lofgren’s voice sounds like Young’s in places here and elsewhere on Nils Sings Neil. Piano again comes to the forefront on “Don’t Be Denied,” a touching look back at Young’s formative musical years and the difficult but necessary move from his Canadian homeland to the States to be part of the California music scene. Under Lofgren, “World On A String” becomes a rolling blues number, with bottleneck slide taking the tune down the backroads of the  Mississippi Delta. Lofgren evens rescues “Wonderin’,” a tune from Young’s obscure 1983 rockabilly experiment Everybody’s Rockin’. Instead of going back to the 1950s and sock-hops, Lofgren borrows a page from a century back, playing a sleepy, barrelhouse-like line under the lyrics. Those touches are what touch the listener and make this record one Neil Young fans will want to hear.

Ultimately, Nils Sings Neil is one friend paying musical tribute to another. Young is lucky to have such a buddy in Lofgren.