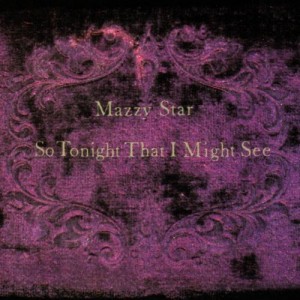 When you read critics describing a work of art, you’ll often come across the word “timeless” used to describe the artist’s statement.  Usually that means that it’s very difficult to pinpoint the exact moment in history when the piece was created.  I like “timeless” statements, especially from musicians, as it’s very easy for recorded music to become dated and lose its appeal.  In the case of Mazzy Star’s second album, So Tonight That I Might See, “timeless” has three meanings.  Not only is it difficult, on first listen, to say whether the music is from any particular decade in the latter half of the 20th Century, it also sounds fresh when listening to it nearly 18 years after its initial release.  In addition, there’s something about the quality of the music that seems to make time itself completely disappear or lose its meaning.  Let’s enter into the void of So Tonight to figure out if this effect is intentional or a happy accident.

Mazzy Star is technically a band, but the direction is left entirely up to the duo of singer Hope Sandoval and multi-instrumentalist David Roback.  Although the minimal liner notes offer “Credits” listing Keith Mitchell, William Cooper, and Jason Yates, there is no breakdown as to who played what.  I suspect Roback played the vast majority of So Tonight’s tracks himself, but we have few clues to verify that assumption.

One criticism that I remember hearing about Mazzy Star’s three albums is that they all sounded too similar to be taken on their individual merits.  Roback and Sandoval have done little to defend themselves against that notion, shunning interviews and offering cryptic responses to those lucky enough to corner them for a chat.  This “fuck the critics” approach allows the music to stand on its own – you either like it or you don’t – and Mazzy Star doesn’t care which.  I don’t own either their debut, She Hangs Brightly or their final release, Among My Swan, but from what I remember there is actually some substance to the criticism.  Yet why should Mazzy Star be pressured into changing things around?  They’ve hit upon a sound unlike anything you’ll ever hear elsewhere and the sound is natural, beautiful and dark.

One term used to describe Mazzy Star’s music is “psychedelic.” I can’t completely disagree with that description, but I wouldn’t want to assume that Roback is looking to repeat the paisley underground brain benders he’d cooked up with his previous bands, The Rain Parade and Opal.  The trippiest elements of Mazzy Star’s sound come from Sandoval’s Queen of Slack voice and Roback’s occasional feedback bursts.  If standing in the middle of a desert with wispy clouds floating overhead and a heat mirage rising from the ground in the distance can feel “psychedelic”, then that is indeed the trip Mazzy Star takes us on.  Everything on So Tonight is slowed down and baked until the energy is completely sapped.  Yeah, I guess that could make us feel that we’re out of our skulls.

Opening with the group’s most popular song, “Fade Into You,” So Tonight tricks us into thinking that, with this song out of the way, we’re going on a ride to explore other uncharted territory.  In fact, “Fade” sets the tone of the record and we never deviate from that course.  The simply strummed acoustic guitar, the rising and falling phrases from the slide guitar, the  tambourine’s marking of the beat, the complimentary piano chords, and Sandoval’s sad and gentle voice make their debut on this song, but they pop back out of the gloom repeatedly throughout the entire record.  “Fade Into You” is one of those songs that transports the listener back in time to the moment it was first heard, not because it sounds like the 1990s, but because it’s a stunner and hard to compare to any other music.

“Bells Ring” follows with a rhythm only marginally speedier than “Fade” and employing more dominant electric guitar.  The mood isn’t much different, though, only the flourishes used to describe it.  Sandoval still croons from her smoke-filled cave, lagging seductively just behind the beat as Roback’s pure feedback tones are tacked up for decoration.  Similarly, “Blue Light,” in 6/8 time and with a purring organ laying down the changes, creeps into our heads.  Here Sandoval uses far less echo on her voice, but we’re already hopelessly drifting through The Mazzy Zone.  Perhaps all music will sound like this from now on – no dancing, only swaying – no shouting, only whispers.

“She’s My Baby” mixes it up only slightly.  The drums are just a little busier; Sandoval’s delivery mildly bluesier.  Roback is strangling some noises from his electric guitar while the acoustic guitar track anchors the song away from madness.  Yes, Roback’s song-ending solo stirs thoughts of something we’ve heard on a fade-out from one of the numbers on Electric Ladyland, but Sandoval’s soul is tortured in a different way than that voiced by Jimi Hendrix.  There are more elements here reminiscent of The Doors or The Velvet Underground than anything attributed to Jefferson Airplane or more overtly “psychedelic” combos.  “Unreflected,” on the other hand, with merely acoustic guitar and hand drum percussion as an accompaniment to Sandoval’s voice, takes Mazzy Star closer to the singer’s folk music roots, yet the vibe is not dissimilar to that on the rest of So Tonight.

The album’s biggest surprise comes in the form of “Wasted,” a slow blues with Roback flexing his guitar muscles at every opportunity.  Shimmering keyboards phase in and out as Sandoval tells us she feels like she’s been “wasted all day long.”  The bass guitar meanders beneath her in unprecedented embellishment.  Nothing about “Wasted” feels shockingly out of place, however.  We’re still the victims of Mazzy Star’s time thievery and we don’t even care if there’s a way to set things right.  The vibe remains the same.

Having given So Tonight another listen, I can say that Roback and Sandoval never intended to capitalize on their distinctive sound.  They came just hairs shy of hitting the top 40 with “Fade Into You” and yet they never jumped the shark to rest on the sunny side of the lake.  While Mazzy Star’s music may maintain roughly the same pace and mood over the course of the record, it’s clear that the group is comfortable in this setting and not about to step into the light to harsh the mellow.  The band may not have intended to create something that’s “timeless,” but they knew exactly what sound they were going for and they worked it over to the point of exhaustion.

There are few examples of an album that holds up all the way through after this many years as So Tonight does, but that was my point all along.  Records like this exist because they’ve been temporarily wrenched from some alien dimension where they’ve been spinning eternally and out of the range of perception by weak humans.  We only rent this stuff (it can’t be owned) and get briefly sucked in by the power of gravitational forces.  Mazzy Star may have harnessed this power while recording So Tonight, but, short of granting them deity status, I can’t acknowledge that they meant to tap into energy beyond mortal reckoning.  By carving out their own niche, they toggled the matter/anti-matter reactor and sailed off into the cosmos with their fans in tow.  There was and will only ever be one Mazzy Star in the heavens, we’ll just never be able to keep track of how many light years it takes to get to that constellation.