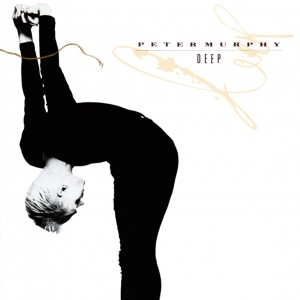 Maybe I’m not old enough or maybe I’m “too Wisconsin” to have enjoyed Peter Murphy’s work with the band Bauhaus in the late ’70s and early ’80s.  Of course I’ve been a big fan since hearing their music after their initial breakup, but Bauhaus did not lead me to Peter Murphy.  Like so many other things in life, I did this one ass backwards.

As a young man of 19, while working at our town’s college radio station, I first heard Should The World Fail to Fall Apart, the debut solo record by Peter Murphy.  I immediately fell in love with his rich baritone and the metaphysical ruminations of his lyrics.  Love Hysteria followed soon afterward and I was even more impressed with Murphy’s work.  By 1990, I was off the air and working in our town’s dying record store when along came Murphy’s third record, Deep.  The record sold like crazy, based primarily on the success of the single, “Cuts You Up.”  This monster of a song was everywhere and with good reason.  “Cuts You Up” is as close to perfect as a pop song can get.  But here’s the rub in my little tale.  In college radio, you have the advantage of playing just about any damn thing you want when on the air.  When a record is big, like Murphy’s first two releases were, you can easily hear every track several times over through the course of a semester just by hanging around while your friends are pulling shifts behind the microphone.  When working in a record store, you can only hope that you’ll receive a promotional copy of the records that you want to hear.  No such luck with Deep.  So, while I owned Murphy’s first two records, I’d never even heard all of Deep, but I remained haunted by “Cuts You Up” for two decades.  I finally broke down and purchased Deep knowing that it would take a lot of bad choices from Murphy for him to create an album that I didn’t like.  I’ll do my best to describe what it’s like hearing this collection for the first time.

Deep sees Murphy working with a constant core of musicians called The Hundred Men.  Along with consistent collaborator, keyboardist/guitarist/songwriter Paul Statham, he’s relying on bassist Eddie Branch, drummer Terl Bryant and guitarist Peter Bonas to help turn his moody art pieces into pop rock gems.  While their performances are solid throughout, I have a quibble with producer Simon Rogers’ stamp on the record.  At the time, he may have been pushing for a dance rock sheen to the tracks, but twenty years on some of this sounds rather dated.  The gated drums and the percolating synth rhythms have not aged well at all.  But if that’s all there was to Deep, I would have regretted my purchase.  Thankfully there’s plenty of substance to these songs and it refuses to be repressed by some industry hack’s notions of how the material ought to sound.

Aside from having one of the most distinctive voices in all of rock (sometimes seen as a David Bowie clone by those not familiar with Murphy’s full body of work), Murphy’s allure is also largely due to his enigmatic, yet beautifully poetic lyrics.  One fine example is found on the track “Crystal Wrists.”  Each listen brings new and different meaning to my mind, yet I couldn’t say that I really know what he’s singing about.  Amidst very cleverly layered guitar lines, a crisp rhythm, and bright tones, Murphy sings, “I twist a shade to my right, and spit at Beelzebub on sight, and go on loving all I see, for here I live on patiently.”  He seems to be referring to biding his time on Earth, trapped by his sins which he yearns to cast aside like shoes thrown to the corner of a room.  If I listen to the song tomorrow, I’m certain to find a different interpretation.

The elegant “Marlene Dietrich’s Favourite Poem” describes the aging film star at death’s door: “Hot tears flow as she recounts, her favourite worded token, forgive me please for hurting so, don’t go away heartbroken no.”  Dressed in acoustic guitar, delicate harp and changeling synthesizers, it’s one of Murphy’s most moving pieces.  A similar approach is taken on “A Strange Kind Of Love,” which dispenses with most of the synth washes in favor of even more acoustic guitar.  This song, however, is a minor key love ballad with even better lyrics: “Blind to the gemstone alone, a smile from a frown circles round, should he stay or should he go, let him shout in a rage so strong, a rage that knows no right or wrong, and take a little piece of you.”

The disc closes with two versions of the song “Roll Call,” the second of which is nearly two minutes longer than the first.  The guitars have an ’80s New Wave element reminiscent of the playing of Jamie West-Oram of The Fixx (not a knock;  I’m a fan), but Bryant’s drums steal the show.  The longer remix adds even more percussion and some sort of Middle Eastern horn – all for a song about getting bored with the club scene.  Of course Murphy doesn’t make it as simple as I just did, but it’s unusual that I’m able to know exactly what he’s singing about in one of his songs.

There are a lot of things that I wish Deep had: more darkness, more world music elements, stronger guitar lines, less shimmer, more songs.  But the record never does “jump the shark” and it always remains true to Murphy’s intentions.  1990 was a different time, I’m afraid, and being able to pinpoint the approximate year of Deep’s release by listening to the production does not do the album any favors.  Yet Peter Murphy will always remain one of rock music’s most intriguing characters.  Deep may not be as deep as I’d like it to be, but I’m still sorry that it took me 20 years to add it to my collection.