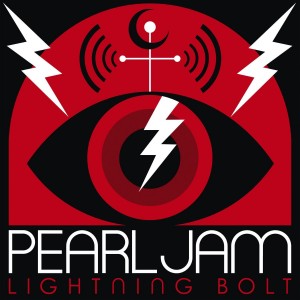 Pearl Jam is my favorite band – ever.  You need to know that fact before you take in the rest of the words that I’m laying down here.  And I needed to also focus on that truth every single time I’ve listened to any new material from this group.  So, going into the first new collection of studio work from them since 2009’s Backspacer (has it really been that long?), I have to do a few extra things, like putting the music in the proper perspective with the group’s evolution, which I’ve followed very, very carefully over the years, and remembering that I have changed a bit since the last album as well.  Everyone, from the Wal-Mart greeter to the international pop star, will have had one thing in common in-between releases.  We’ve all gotten older.  And despite the trusted adage, not everything improves with age, and the degree of improvement or “unimprovement” will vary based on the observer’s perspective.

Some of these concerns are meant for my friend, Tom to consider.  See, Tom is a big Pearl Jam fan as well.  But although he bought Lightning Bolt right around its release date last month, he was quick to tell me of his dislike for it.  In fact, purchasing Tom’s copy is how I came to own the record myself.  This actually doesn’t surprise me that much.  What Tom loves about Pearl Jam is what many people love about Pearl Jam.  Their thoughts drift back to those heady days in the 1990s where Pearl Jam was the band to beat, the people’s band, and the band to defy your expectations.  The thing is, Tom (and your ilk), they still are that band.  They’re all of those things you remember them to be, but now they’re older – just like you are.  The problem is that your expectations haven’t changed, but how Pearl Jam will defy those expectations once more has changed significantly.

Distractions abounded, with solo albums, side project band reunions, and the business of a Soundgarden reunion, which kept drummer Matt Cameron engaged to the point that not one song on Lightning Bolt bears his songwriter’s credit, the first time that’s happened in his 15 years with Pearl Jam.  Stepping to the fore, however, is lead guitarist, Mike McCready, who celebrates co-authorship of two songs, and a dynamic presence throughout the collection.  This is coming from a guy who was lucky to have written one song on any of the band’s previous records.  It’s this shift that may be the biggest single cause of the change in the group’s direction.  Where Backspacer enjoyed several moments attributed to a “New Wave” influence, largely due to a collective appreciation for the changing pop and rock landscapes during the late ‘70s and early ‘80s, and emblematic of Cameron’s more experimental track at composition, Lightning Bolt is all about the guitars.  McCready, always keen to drop a few lines of a classic Hendrix, Van Halen or Sabbath riff in the middle of one of his own live solos, seems to have a ready stash of truly “classic” sequences that he’s discovered on his own, perhaps while searching for that painfully overlooked shred-burst that should have become part of our collective rock conscience decades ago.

The lyrics, same as always, are the work of singer Eddie Vedder.  While there’s a sense of adventure bleeding into the group’s sound, Ed’s lyrics remain thought-provoking and continue to cut fools to the quick.  This is how “aging” becomes “maturing,” and subtlety is wielded like machete.  Opening track and Vedder composition, “Getaway,” with its churning guitars and four-on-the-floor drums, picks apart Tea Party lunatics and religious over-conservatives by taking a stance for Ed’s own beliefs.  True mutual respect of each other’s political views requires that two opponents meet in the middle to find common ground and a solution that’s amenable to both sides.  Ed wasn’t about to let our recent, terribly misguided government shutdown go by without comment and he doles out well-deserved condemnation.

The album’s first single, “Mind Your Manners,” one of McCready’s inventions, is solid punk rock, showing us that the guitarist isn’t only a metal head.  And that’s the thing about the ridiculous “grunge” designation, right?  Those bands from the land where the coffee is strongest loved punk and metal equally.  When lazy reporters couldn’t lump them in one category or another, out comes the word “grunge”, a term which no self-respecting band would ever have used to define their approach.  But here it is, laid bare.  McCready then swings to the other side with the”beyond classic” classic, “Sirens.”  If not for Vedder’s distinctive voice, veering close to Dave Matthews’ territory, we might mistake the song for a forgotten mid-70’s mid-tempo guitar anthem that somehow slipped off the classic rock radio station’s playlist.  The solo is more something we breathe in than something we hear.

“Pendulum” marks a return to the collaboration between longtime associates, guitarist Stone Gossard and bassist Jeff Ament.  It’s also not very characteristic of much else in the PJ catalog.  Ament’s darkened slides, anchored by echoing percussion, and framed with ghostly, chiming keyboards produce a combo that either chases away the fair weather fans, or has the rest of us praising the band’s inventiveness.  Similarly, “Let The Records Play,” another Gossard composition, is mainly a walking blues number.  It sounds more like a group that Alligator Records dug up while prowling seedy dives.  McCready’s guitar alternately purrs and screams, just like good blues ought to.

Not all has changed for Pearl Jam, it seems.  The record is once more produced by the most complimentary fellow the band has had at the boards throughout their career, Brendan O’Brien.  And they’re backed by hairy Hawaiian, Kenneth “Boom” Gaspar, whose beautiful organ swells have graced the last several Pearl Jam records.  They’ve also, wisely, made use of the talents of Don Pendleton, whose sleeve and art design includes images worth pondering nearly as much as the songs within.

My final assessment – it’s not my favorite record of the band to date, but that’s really only because they have so much else in their repertoire that I absolutely adore.  These songs will grow on me, and that they don’t immediately resonate as strongly with me is no fault of the songs or their performers.  A new Pearl Jam album is still better than any ten albums that hit the streets this year.  I’m the one that has to catch up.

But none of this really matters.  Pearl Jam, like the Grateful Dead, shows their true worth in the live arena rather than on slabs of vinyl.  What excites me most is the thought of how these songs will sound in a live setting, after the band has become comfortable with them and has modified them slightly over the course of a supporting tour.  In that respect, this album gives them more variety for their toy box and they’re going to have a lot of fun playing.  When I get a chance to see them, I’m going to have a blast as well.  And we have to have this meeting now, before any of us becomes so old that we’re not having fun doing it any more.  Knowing what I know about me and about Pearl Jam, we must have another 30 years before that’s even possible.  I’m not sure about Tom’s commitment, however.  Your loss, buddy!