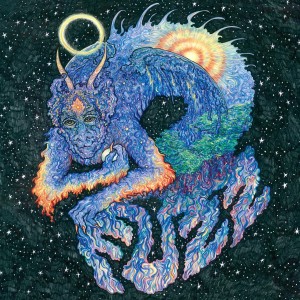 Although this is supposed to have been a “quiet year” for San Francisco musician Ty Segall, he’s featured prominently on another new release from earlier this month, the debut album from lysergic power trio, Fuzz.  But on this album, Segall returns to the first instrument on which he’d trained, the drumkit.  While Segall also contributes vocals, the group is rounded out by guitarist Charlie Moothart and bassist Roland Cosio, colleagues from various other band configurations with which Segall has played over the past few years.  Worlds apart from Twins (reviewed here earlier this year), Fuzz heartily embraces crushingly heavy psychedelia and straddles the divide between Tony Iommi’s early string-bending excursions and countless bands ‘overdriven ‘60s garage experiments.  Elements of Blue Cheer, Hawkwind, and Syd Barrett’s Pink Floyd swirl side by side, emerging to display dominance as the song demands.  At under 40 minutes in length and sporting just 8 tracks, we’d be tempted to consider this as filler between Segall’s projects bearing his own name, but that’d be a colossal mistake.  Fuzz is easily one of the most exhilarating releases of 2013 and it should attract fans of not only new music, but also those hopelessly in love with the sounds of Nuggets-era America.

The five-minute ride concealed within the disc’s opening track, “Earthen Gate,” perfectly sets the stage for what’s to follow.  It begins much as we imagine a pseudo ballad discussing some metallic trip through a mythical wasteland might begin.  But then the rhythm section fairly explodes, Segall chanting beneath it all like some disembodied spirit of an acid casualty.  When Moothart finally unleashes his fury on the fretboard, we’re shocked not to find Dickie Peterson lurking in the wings, moaning “Oh Lawd, ain’t no cure.”  All finger vibrato and tones stretched to the point of snapping, Moothart proves himself every bit the match for Segall’s typical guitar gymnastics.

Rolling in the delicious mire that permeated Black Sabbath’s debut, the album really gets interesting by the time “Hazemaze” hits the speakers.  While his voice displays the inherent contrary snottiness of a punk sneer, Segall’s drums are more a pacesetting force, helping to tastefully change tempos and also pushing the intensity into the band’s upper limits.  This frees Cosio to maintain deeply penetrating bass tones which can’t help but resonate in the listener’s chest cavity.  In fact, that bass murk is present in all the tracks, serving to both darken the tunes and draw our attention to the lower register.  “Loose Sutures” follows suit on a more 1960s British electric blues path, Moothart soloing wildly over the churning, pulsing rhythm.  The groove is disrupted by Segall and Cosio taking noodly solos in turn for no apparent purpose than to show that power trios like to play solos.  Here the rhythm section might feel a bit like The James Gang’s, competent and inventive, but ultimately serving as the back-up to a brilliant leader.

Switch gears to “Preacher” and a more driving, hammering attack to the drums.  Moothart coaxes gelatinous chords during the verses, but catches flame on the chorus, spewing sparks in a tripped out cascade.  “Raise” follows with what feels like a rehashed blues number pushed to amplified excess.  Moothart takes the mic here, grounding the song in a way that Segall’s fey whine can’t.  Before we’ve hit the end of the line, we’re somehow aboard a speeding freight train with tragically damaged brakes.

Fuzz is the perfect example of umpteenth-wave garage psych revival.  We’ve seen this style go in and out of phase over the decades, but the best proponents are adept at not only capturing the thrills and spills of the 1960s, but taking the sound in bold, new directions.  Get in on this wave as the getting is good, dear reader.  Should the trend continue, we’re sure to see the music watered down over time.  But Fuzz gets it right and puts it right in our faces.  I’m excited to see where Segall takes it next.