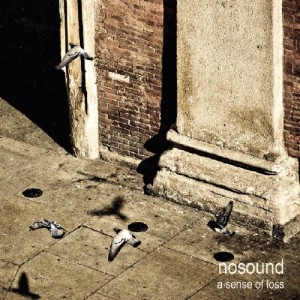 Nosound – A Sense Of Loss

Italian progressive rock band Nosound are still very active on the scene.  There has been a steady stream of full albums, EPs, deluxe editions, and DVDs released these past few years, but today we’ll drop back for a visit to their third full album, 2009’s A Sense Of Loss, which also serves as an excellent introduction to Nosound’s music.  Issued under the banner of the outstanding Kscope label, A Sense Of Loss displays a conscious effort to dispense with electronic keyboard sounds in order to rely on a more organic feel.  Through its haunted melancholia, the record assumes its position as one of the most important prog releases of the 21st Century.

Led by vocalist/guitarist/keyboardist Giancarlo Erra, Nosound is rounded out on this album by keyboardist Paolo Martelacci, guitarist Paolo Vigliarolo, bassist Alessandro Luci and drummer Gigi Zito.  While Erra originally composed and performed the music alone, he’d soon realized that requests for live performances dictated his need for a full band, whose members eventually performed on the albums as well.  Erra now assumes the role of vocalist, chief songwriter, and overall sonic constructor, using Martelacci’s and Vigliarolo’s talents to expand upon his compositions.  A Sense Of Loss is also notable for its use of a string section to provide a droning gloom where synthesizers may have been employed previously.  Also, Vigliarolo sticks to acoustic guitar and leaves the electric textures to Erra himself.

The album’s title is emblematic of its sound, in that it’s dominated by a tug of longing which is fleshed out by warm washes of sound amidst a spectacular audio mix.  Nosound is thus able to ease the listener into emotional surges of regret and painful memories without the feelings becoming overwhelming.  The minor key choices and slow speed tempos also serve to enhance the pervasive sadness.  Therefore, as an example of engineer, songwriter, and performers bringing an A-Game of collaborative effort to give life to concept, A Sense Of Loss is remarkably successful.

Nosound’s influences are somewhat obvious, however.  Touching especially on the path taken by Pink Floyd circa Animals and afterwards, as well as fellow Kscope signees, veteran prog duo No-Man, Nosound is not intent on dazzling you with their virtuosity.  They’re far more interested in capturing moods, mostly darkened and bruised, with their playing.  This is not to say that anything about Nosound is derivative.  They just know what they’ve found to be successful elsewhere and they have no intention of reinventing those wheels.  And with just six tracks spread over the CD’s 50+ minutes, they give themselves the time to more easily achieve their goals.

Giancarlo Erra has one distinct difference from his idol Tim Bowness of No-Man.  Erra chooses to blend his vocal lines into the mix rather than placing them starkly atop the music track.  This isolation causes Burgess’ voice to stand out, as intended, while Erra’s works as if it’s yet another instrument.  Bowness also tends to be a bit breathier in his delivery, moving from emotion to emotion as the lyrics dictate.  Erra, meanwhile tends to set the emotion with the music, using his voice to maintain and reinforce the mood.  There’s no right or wrong here, more notes on two similar music acts that remain complimentary to one another despite the difference in tactics.  Erra’s method is illustrated best on “Fading Silently,” where shifting walls of bass tones, isolated piano, simplified drumming, chiming acoustic guitar, and rich strings recede to allow a glimpse at the man behind the curtain before obscuring him once again.

At times, A Sense Of Loss can be taken as six movements to one comprehensive piece.  There’s a flow to the sound that is usually reserved for conceptual pieces, but works to great effect here.  Follow the path from “Tender Claim,” a mournful symphonic Yes-meets-post rock number, to the acoustic guitar arpeggio and acoustic piano elegy of “My Apology,” and then out to the even slower-paced “Constant Contrast,” and the ride is far from jarring.  This trio of songs serves as the set-up to the album’s sprawling closer, the near-16 minute “Winter Will Come,” which noodles around a bit before settling into a pattern of swirling keyboards and rigid electric guitar.  While the pace remains glacial, the increasing heaviness of the guitars vies for our attention with occasional Hammond organ, military drumming, Erra’s spectral voice, Mellotron, and oddly circling sampled tones.

Nosound is the antithesis to the “I’ll wank for twelve bars then it’s your turn” school of prog rock.  Giancarlo Erra is very aware that you can demonstrate your abilities by performing as part of an ensemble as easily as you can when acting as the featured soloist.  Therefore, he’s freed up to compose without the need for unnecessary measures that do little to contribute to the piece’s direction.  This is not your father’s prog, children.  You’ll find yourself in most easily in harmony while listening on your car stereo during a moonlit drive, or alone in a darkened room than you will when listening at top volume on an expensive system.  But for those that do choose the technical high end, the mix will not disappoint.  Nosound is actually Lots Of Sound, and picking through their recordings will continue to be an extremely rewarding experience.