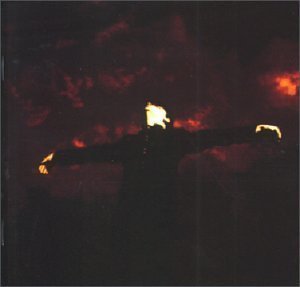 Far removed from the synth-pop novelty for which he’s best remembered, 1979’s “Cars,” Gary Numan’s music nowadays simultaneously exemplifies his status as an innovator in the use of electronics in popular music while reflecting the influences of those who were heavily influenced by his own music.  Yes, influenced by those he’s influenced!  So, while his current output shares more in common with the music of Nine Inch Nails than that of The Human League, Numan’s switch to that style was more a matter of coincidence than a calculated attempt to cash in on the flavor of the day.  After chasing the pop dragon for another 15 years after “Cars,” Numan instead moved to make music more personal, more dark, and more human, and of note for the “rockers” amongst our readership, with more guitars.  Now with a clutch of solid releases in this style under his belt, Numan continues to enjoy clandestine career resurgence.  Let’s take a closer listen to the best of these albums, 2000’s Pure.

Numan’s need to present himself as less robotic has been an ongoing battle.  Too many people will think of him as that lonely android guy standing at his keyboard during the dawning of MTV.  Considering that his first choice in instruments has always been the guitar, and that he hadn’t planned to be coated in gobs of white make-up for his early TV appearances (he blames bad acne) and subsequent promotional tours and photos, you can see where he started asking himself, “Well, how did I get here?”  His wife, Gemma, talked him down off of that ledge and encouraged him to just do his own thing.  Pure, therefore, is pretty much Numan’s gig.  He’s joined by the duo then known as Sulpher, consisting of drummer Monti and guitarist Rob Holliday (whose resume is extensive and amazing and consists in part of a brilliant live presence in Mission UK and for the last few years as the touring guitarist for Marilyn Manson).  Numan himself plays guitars, keyboards, and drums when not supplying his distinctive nasal and very British-accented vocals.  He’s also the sole songwriter with the exception of one tune co-written by Sulpher.

Beginning with the title track, Pure seeps into the cranium via a grinding machine noise and a stark keyboard line.  Then everything else comes crashing in – loud and heavily distorted guitars, squelching synthesizers filtered through guitar amplification, live drums, and a propulsive rhythm program.  The music is so full and menacing that it bears little resemblance to the 30+ year-old paean to the automobile.  True, we always felt that the artificial life forms that Numan surely spoke for may one day revolt and topple humanity, but now it sounds like they have the weaponry to succeed.  The subject of the lyrics is unclear, but Numan’s dissatisfaction with her is evident: “Hey, Bitch, this is what you are.  Purified, Sanctified, Sacrificed.”  His voice now transformed into a brilliant caterwaul in tortured anguish, he sets out to tell more tales.

The backdrop is lit less brightly on “One Perfect Lie” as Numan wrestles with understanding an associate’s death through their views of the world and cosmos while he himself is anchored in his own atheism.  Amidst the swirling synthesizers and vocal effects, he sings “One perfect lie/Wrapped in kindness and tears/I wish I believed in your Heaven/One perfect life/Led by blind faith and trust/If God has a heart He will find you.”  It’s heavy reflection, and something he’d largely avoided until this later date in his career, but it comes from him without hesitation as if he’d lived this song time and again.  His comments on divine nature continue with “My Jesus,” in which he correctly assesses that the nature of a mythological savior is completely determined by those who feel they’ve been saved.  In Numan’s case, Jesus is a figurehead that transcends the Bible’s more human portrayal to become a looming symbol of the loneliness, pain, dishonesty, and fear that accompany someone waiting out their life for the promise of something better beyond.

He changes gears a few times across Pure, perhaps most notably on “Little InVitro.”  Here he examines the heartbreak of a failed in vitro fertilization, which he endured with Gemma.   A true family man, it’s telling how deeply he was affected by the dashed hopes that followed the promise of another new addition to their household.  The gloom of persistent, swarming synthesizers and the ache in Numan’s voice are more than adequate means of detailing the couple’s pain.  The record then closes with Numan’s discussion of paralyzing fear in “I Can’t Breathe.”  Whatever the protagonist’s psychological malady – agoraphobia, paranoia, or if it’s Numan himself, Asperger Syndrome – he’s incapacitated by worries about things both real and imaginary.  Numan’s cold persona was eventually discovered to be the result of his challenge with Asperger’s, and his lyrics here can only come from someone with extensive knowledge of the unpleasant duty of dealing with his fellow human beings and their suspect motives.  It’s not the way that rock musicians typically address psychological conditions, and you’d probably least expect to find a topic so gripping on a record by this artist.

So, forget about what you think you know about Gary Numan.  That guy existed a lifetime ago and it’s his reinvigorated spirit that prowls the stage today.  You should be able to track down this release on Eagle Records with no problem, and then branch out to learn more about the status quo of this truly unique performer.  The difference between the old stuff and the new is like that between a Model T Ford and a jetpack.  Once you’ve evolved past ancient technology and design, who the hell needs cars?