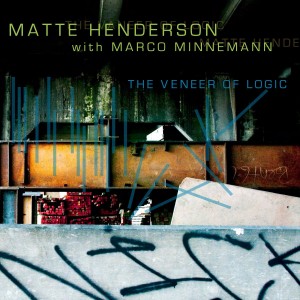 There’s a proliferation of great King Crimson-related projects seeing the light of day recently.  One company that’s contributing heavily to this trend is Seattle-based 7 d Media, whose philosophy stems from the perceived limitations of traditional record labels and media outlets in properly servicing modern artists.  Already the home to Crimson’s Pat Mastelotto, Tony Levin and Trey Gunn, 7 d has just unleashed the debut album from guitarist and multimedia experimenter Matte Henderson, The Veneer Of Logic.  Henderson has previously performed with his label-mates in various configurations, as well as with artists as diverse as Henry Kaiser, John Medeski and Natalie Merchant.  His main foil on Veneer is the amazing drummer, Marco Minnemann, known for his work with an enormous list of musicians, including Joe Satriani, Steven Wilson, Andy Partridge, Adrian Belew, Kreator, Eddie Jobson, John Wetton, Chad Wackerman and Terry Bozzio.  The album’s guest musicians include the aforementioned Crimson label-mates as well as guitarists David Torn and Bad Brains’ Dr. Know.

A huge influence on Henderson, Dr. Know terms Veneer’s style as “muttcore” due to its diverse flavors – jazz, metal, electronic, industrial, ambient, and sample-based sound collage.  The “muttcore” tag is dead-on as Veneer persistently defies further categorization.  Henderson again tosses this salad by his creation of 11 new videos, one for each track on Veneer, included on a separate DVD.  The collection then provides for two completely different experiences, one with the visual component and one without, and they’re both captivating.

Before I had an opportunity to slide the DVD into my PS3, I gave the CD a spin several times.  Opening track “Whirled,” one of Henderson’s nods to Bad Brains (of which both guitarist Dr. Know and bassist Daryl Jennifer were both frustrated jazz fusion artists looking for a greater challenge, just like Henderson), splits the air with alternating metallic march and electronics-fused, low-key jazz noodlings.  Though the track, like the rest of the album, contains no sung vocals, it does include a sample of some fellow describing “a great, wide, wonderful world,” when the guitars are not savaging our ear drums, that is.  Flip then to “Bible Camp” and its haunting, echoing, childlike melody and a de-emphasis on the drums save for a jazzy skitter, and we know we’ve just crossed into an odd parallel universe engineered by a deity with his tongue stuck firmly in his cheek – Matte Henderson.

That disorienting effect, where things seem slightly familiar, yet distorted by reflections from a Hall of Mirrors, rolls on in “ppgf” (short for “playing pussy, getting fucked”).  A sinister, funky synthesizer leads the way through this tangle of sampled voice mail messages (“I’m callin’ ya back.  Don’t have a heart attack ‘cause I’m calling ya ba-a-ack.”) and monstrous guitar riffs.  That same evil synthesizer draws its lines out a bit longer for the creeping approach of “Can’t Indict A Flower.”  Henderson once again goes sample-crazy with the repeated use of a demented voice reciting the song’s title.  Guitar and drum freakouts abound!

The profanity-laced over-dramatization of a woman’s unpleasant parking lot experience provides the backdrop for “Come On.”  Henderson coaxes noises from his treated guitars that cause him to exceed noise pollution limits in several surrounding counties.  The song’s impossible rhythm is hammered out with Minnemann’s machine precision.  This contrasts with the no less noisy “Balinese Funeral” by the latter’s use of Indian percussion and Southeast Asian chime samples punctuating the back alley skulk of a rhythm track.  The relatively tame “Tomatte” closes the CD with some stolen moments from Joe Zawinul’s time with Miles Davis or Isaac Hayes’ time establishing himself as an afro-centric, cerebral pop composer fleshed out by performances from the extraterrestrial clone of Eddie Hazel after a satisfying bowl of Amphetamine Pops.

As much fun as you’ll have listening to the CD, give the DVD a spin or seven for a completely different ride.  Henderson has a background in visual arts production, so he relished an excuse to pay homage to groundbreaking film directors such as Stan Brakhage while ransacking vintage stock of terrible sci-fi movies, children’s educational films, forgotten cartoons, and foreign cultural footage.  With images shown in color and black and white, run forwards and in reverse at varying speeds, and with shocking color filters and washes applied, the DVD is the point at which you remorselessly launch yourself to drift amidst Henderson’s dented can version of the universe.  What caused him to tie certain images to certain sounds is left largely for the viewer/listener to decide, but they’ll be guaranteed a chuckle-fest while they try to figure it out.  Tripped out, unnerving, dated, and baffling, the video images provide for the full experience of this project’s vision.

This is but the first release ever credited to Matte Henderson, but his union with 7 d proves to be a fruitful one.  Keep your ears open for other releases on this label which may not bear Henderson’s brand, but nonetheless enjoy the product of his labors.  He enjoys damn fine company while he leaves his own particular concoctions to stew, in any case.