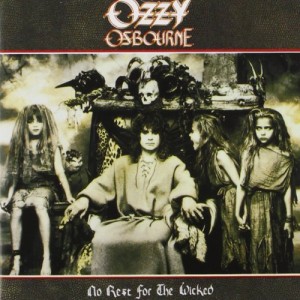 Ozzy Osbourne – No Rest For The Wicked

The Prince of Darkness was in a bit of a pickle in 1988. Having released two albums (Bark At The Moon and the abominable The Ultimate Sin) employing the highly underrated Jake E. Lee on lead guitar, and a baffling double live set (Tribute) with material featuring the late Randy Rhoads, all appearances pointed to an unavoidable career downslide. Enter: 21-year old guitar phenom Zakk Wylde, and the rest is history. Produced by the able team of Roy Thomas Baker and Keith Olsen, No Rest For The Wicked marked the point where Ozzy was able to turn his notoriety into superstardom, and I credit that ascendance nearly exclusively to Mr. Wylde. I’ll explain.

Kicking off with the blistering condemnation of televangelist Jimmy Swaggert (among others), “Miracle Man” announces that Ozzy had rounded up not only another collection of solid material, but he had the perfect foil now in tow for his onstage antics. After all, if you’ve reduced your act to soaking the front rows of your audience with squirt guns, you’d better have something for those folks further back, who aren’t devastatingly inebriated, to listen to while you clown around. Although bassist Bob Daisley, whose songwriting is now known to be the secret ingredient to most of Ozzy’s studio albums, was sacked, yet again, by Ozzy’s management (read: Sharon) shortly after the album was recorded, his mighty and inventive riffs contain the guts of the songs and allow Wylde to, well, go wild. The “band” featured on this album is rounded out by the late Randy Castillo on drums, and the venerable John Sinclair (Uriah Heep, Savoy Brown, The Cult, among many others) on keyboards.

The brutality of Wlyde’s playing is something that was lacking in that of his predecessors, Rhoads, Lee, and even Brad Gillis. In fact, his now distinctive style can be said to have, along with the style of Pantera’s Dimebag Darrell, so heavily influenced the playing of heavy metal guitarists that followed in their wake that what we now consider to be “metal” would be an entirely different beast had they not been around. I’d like to put this challenge out to our readers – please let me know if you think Zakk Wylde’s playing is derivative of anyone else’s. I can honestly mark a time in metal history that separates the pre-Wylde guitarists from the post-Wylde. While Wylde credits Randy Rhoads and Eddie Van Halen with showing him the way, his innovations are truly his own, even this early in his career. His music with his own band, Black Label Society, takes this metal onslaught and blends it with elements of southern rock and (to some extent) prog rock in a way that makes the hardiest of bikers stand up and pump their fists. Ponder this while you give “”Devil’s Daughter” a spin. The work-out endured through Wylde’s shredding has to be nearly as difficult as a stint on the weight bench of which he is also fond.

“Crazy Babies” is also found on side one of this ancient cassette tape of mine. I marvel at how Baker and Olsen, though not known for handling extremely heavy albums, are able to give Wylde the room he needs and can also capture his performances in such a crisp and unsullied manner. We should also give them credit for how they’ve recorded Ozzy’s vocals. As his fans realize, his range is not exactly expansive. We’re taken with the character of his delivery, rather than any gymnastics he attempts, and he proves to be his own best harmonizer. Check the backing track on “Breaking All The Rules” for evidence, if you doubt me. It takes some doing to make a choir of Ozzys sound like a choir of Freddie Mercurys, but this is as close as it gets.

Just like we’ve been trained to sit through the credits of the latest big-budget action flicks for “secret hidden bonus content,” you need to do the same when listening to this album. Don’t pay attention to the track listing, or rather; add one more on the end. The extra, “Hero,” appears magically after the blistering “Demon Alcohol” at the record’s end. It’s as fine a song as any that were properly listed on the jacket and label, and features some of Ozzy’s best vocals, but I’m a little confused as to why it was included in this way. It couldn’t even be used as a selling point for a particular format (say, if they left it off of the vinyl, but included it on the cassette to encourage tape sales) because no one but those who bought it knew it was there, and even then, didn’t know its name. I guess Ozzy just works in mysterious ways.

Ozzy Osbourne studio albums can pose a challenge to those without some facts to aid in their purchase. You can’t go wrong with either Blizzard Of Ozz or Diary Of A Madman, which both feature jaw-dropping playing by Randy Rhoads. Bark At The Moon definitely has its moments, but No Rest For The Wicked and No More Tears, both featuring Wylde, are perhaps more consistent collections and present what is considered to be Ozzy’s “classic” sound. Both of these records hold up over the decades, which can’t also be said for The Ultimate Sin, with its hair-metal-with-keyboards sheen ruining the mix. And, after giving a listen, if you find the guitars to be more entrancing than the singing, go track down some Black Label Society to see what Wylde does when given complete control. While it all started here, Wylde has blasted off into other directions since in order to keep BLS fans surprised and entertained as well. Ozzy’s new material since Wylde has left the band? Well, he was on a damn good Black Sabbath album recently…