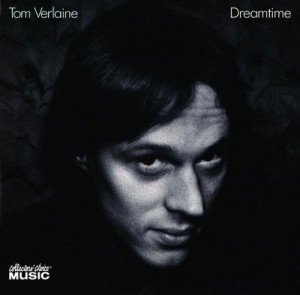 The band Television is the dividing line among punk music fans. They are either the “most punk” or “least punk” of the old school, 1970s American artists, depending on what you like about “punk” mainly. To me, Television fits right alongside Talking Heads, and even some of the Ohio groups such as Pere Ubu and Devo, in that they were coming at not just punk, but music in general, from an entirely new direction. While the angular, mechanical rhythms of these groups were once considered an essential element of punk rock, time has dulled the “pogo” influence of that breed of punker, to the point that modern day fans of punk music may likely not consider Television to be a punk band at all! Thankfully, Television’s singer/guitarist, Tom Verlaine has never lived according to labels. After Television’s dissolution in 1978, he embarked on a solo career that’s not really afforded him the respect that should be bestowed on the founding father of a specific genre, however. Much of his catalog is out of print, including what may be his best solo album, his second, 1981’s Dreamtime. Originally released by Warner Brothers, I’ve managed to rustle up a pricey 2008 version on Collector’s Choice that includes no bonus cuts, but does include some reflections from the sessions’ musicians in the CD booklet’s liner notes.

Dreamtime is a clutch of songs that were recorded over two different studio sessions and while contending with a disintegrating batch of tapes. Verlaine’s guests are all familiar to fans of the emerging New York music scene – Patti Smith Group’s Bruce Brody on keyboards, Jay Dee Daugherty on drums, the mighty Fred “Sonic” Smith on bass, and Rich Teeter of The Dictators and Twisted Sister filling in on drums when Daugherty was unavailable. Lead lines and “response” guitars are played by Ritchie Fliegler, who supports Verlaine’s solos and main guitar framework to the tracks. Like much of Verlaine’s solo work, its accomplishments are not revealed through casual listening. Give yourself about 37 or 38 minutes to sit back and dig in in one sitting and here’s what you’ll find.

Lead cut, “There’s A Reason,” featuring Verlaine’s distinctive voice, sort of an even more nervous version of David Byrne’s, includes wave after wave of six-string mutilations. Ears that expect this kind of damage and ferocity to only appear amid squelching, metallic workouts will not know quite to make of this. Verlaine’s avoidance of unnecessary distortion allows for the listener to more easily discern the individual notes and noises he’s spewing, though his virtuosity is unexpected and a bit shocking. The guitar sound is at times only slightly more “dirty” on “Penetration,” which reads lyrically, as many of the best punk songs do, as a song of confused sexuality – not so much in the “who am I gonna do it to” way, but more the “how exactly do I go about doing this” way, instead.   Layer after layer of guitar is applied to the track, all with different effects employed. When Verlaine does opt to add some buzz to the mix, the responsible guitar is precise, and no buzz is left unattended for too very long. He’s merely playing his instrument, and in the unconventional way that’s made him famous. Though occasionally sounding loose, it’s evident that nothing that wasn’t orchestrated made the final cut.

“Always” rocks it out a bit more (Teeter on drums) as Verlaine assumes a delivery similar to Ric Ocasek, using keyboards to lighten the mood, and builds the guitar stack throughout. Later on, “Fragile” may be used as the word to describe Verlaine’s vocals as easily as they describe the mental state of the singer. The guitars chime behind the grandfather clock tick of the rhythm section. The song that’s best regarded by fans and the performers alike is buried as Track 8 on the disc, “A Future In Noise. The guitars shimmer while trying to rebel, but Verlaine beats them back into line, and his interplay with Fliegler recalls some of Marquee Moon’s more thrilling battles.

Dreamtime is a very difficult album to characterize, which is likely why it fell flat despite the frenzy surrounding punk’s popularity during the dawn of the ‘80s. It’s also not a record for the casual fan of, well, anything. It’s one of those albums like David Bowie’s or Lou Reed’s from the same period, which require active involvement from the listener before the genius is revealed. While Verlaine’s lyrics aren’t as impressive as those of the aforementioned artists, it’s his mastery of the guitar that comes to light when we pay the attention he requires of us. If this blog entry didn’t stir up tons of interest, you may want to wait to see if Dreamtime ever becomes available in a more affordable format, as even the reissue is now out of print and sure to set you back at least $30 (if you can find one in playable condition, that is). In any case, don’t let the works of Tom Verlaine slip into obscurity, if you can help it. While not possessing an enormous back catalog, what he has chosen to release remains vital and revelatory.