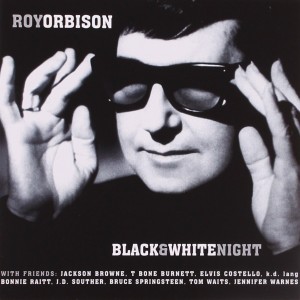 Roy Orbison and Friends – A Black and White Night Live

I’ve always had a great appreciation for the voice of Roy Orbison.  Yet I, like many my age, didn’t really start to learn more about his music until he’d seen a hearty career resurgence in the few years just prior to his death.  There was no shortage of established musicians eager to contribute in some way to Roy’s return to the spotlight, thus he was involved in several projects that actually didn’t make it into the hands of his fans until after Roy was gone.  One of those projects saw life both before and after Roy’s passing in the form of a television broadcast and later as a live DVD and CD.  I’m talking about the famous Black and White Night Live event, of course, and I thought I’d take an opportunity to chew up some of your bandwidth to tell you about it.

Before traveling with The Wilburys and well before investigating a Mystery Girl, Orbison worked with the illustrious T Bone Burnett on a live showcase of Orbison’s classic repertoire supported by who’s who roster of rockabilly and rock and roll legends.  This single show, captured first for posterity in an HBO/Cinemax event entitled “A Black and White Night,” was taped September 30, 1987, and saw its initial broadcast January 3, 1988.  This was one of Burnett’s first forays into wrangling dozens of musicians together for a specific project, giving him practice for later gigs such as the soundtracks for O Brother, Where Art Thou and Inside Llewyn Davis.  Thankfully, Burnett has a knack for keeping artists on task without having the whole affair devolve into some sort of embarrassing, post-award Rock and Roll Hall of Fame “jam,” and he’s easily able to direct the participants to using their talents to pay tribute to the royalty in their presence.

This could have turned into some sort of ego-fest, with each musician trying to outdo the other in their reverence, but luckily that wasn’t the case.  Seeing the list of those involved, that’s a more amazing feat than you’d think.  Aside from Orbison and Burnett on guitars and vocals, the stage was filled with the TCB Band (Elvis Presley’s legendary backing ensemble), featuring the white hot James Burton on guitar, Glen D. Hardin on piano, Jerry Scheff on upright bass, and Ronnie Tutt on drums.  The remaining space was taken by “guest” musicians including Bruce Springsteen, Elvis Costello, and Tom Waits, as well as Coral Reefer Band alumnus Michael Utley on keyboards, and master percussionist, Alex Acuña.  To attempt to duplicate the splendid vocal arrangements on Orbison’s studio recordings, Burnett employed J. D. Souther, k. d. lang, Steven Soles, Jackson Browne, Jennifer Warnes, and Bonnie Raitt.  If you’ve heard this recording, you know that Burnett and Orbison succeeded, and even exceeded many of the heights attained on those early ‘60s Monument Records sessions.  Let’s give a closer listen to some of the highlights.

First I need to let you know that my CD copy of Black and White Night is the original 1989 Virgin Records release, which differs from the more recent Sony version in its slightly different track list and running order.  That stated, both versions begin with the most perfect set-up for the night’s affair – “Only The Lonely.”  The song exemplifies Orbison’s secret approach to songwriting in that he separates himself from the more “macho” points of view to focus on the heartbroken.  This take is likely the reason that Orbison was so easily able to connect to female fans who found more in common with his search for the proper description of his emotions than with contemporary views of women as not much more than victims of conquest.  This live version really feels like a train set in motion; it’s pretty cool when it first gets rolling, but wait ‘til you see what it’s like when it gets up to speed!  Kudos must especially be given to Souther and Browne for their most complimentary of voices.

A somewhat plodding “Dream Baby” gives the TCB Band an opportunity to strut their stuff.  Scheff’s dusty bottom end lends support to Burton’s weepy fills and a stellar background vocal arrangement (lang, Warnes, and Raitt are fantastic together on the “Sha-la-la-la”s and the “Ah uh-huh”s).  This combo also excels on the widescreen epic “Crying.”  Orbison’s voice is at its most heart-rending above the tropical flavors of Utley and Acuña and the sweeping strings.  If you recall, Orbison’s voice drifts just slightly off-key on the song’s final note of the studio release, but there’s no such problem here.  That’s what 25 years of live performance will do for you – you get better or you get out of the biz – and Orbison is happy to show us how it was meant to be done the first time around.

I remember Linda Ronstadt’s version of “Blue Bayou” so much better than the original, but that just goes to show you I’m a child of the ‘70s, not the ‘60s.  When Orbison took control of his hit once more, he made it his own as much as was possible.  Of course, the arrangement is bigger due to the large cast of participants, but its Orbison’s male perspective that changes our understanding of the tale.  It’s just one more of those songs that future generations will remark upon hearing, “Roy Orbison wrote this one too?”  Roy also hearkens back to his time trying to cash in as a rising rockabilly star before finding fame with his ballads.  “(All I Can Do Is) Dream You” is the album’s best evidence of Roy’s willingness to “rock out” in the way he does it best.  Again, Burton shows his flexibility and mastery over early rock and roll stylings by flexing his rhythm guitar muscle in-between spiky, little solos.

All the Orbison hits you remember are here: “Leah,” “Running Scared,” “It’s Over,” “Oh Pretty Woman,” even “Mean Woman Blues,” “Candy Man,” and “Ooby Dooby” – 16 tracks in all on the Virgin version, 17 on Sony’s.  You’ll want to use this as a launching point for acquiring other Orbison material from this period that you’ve missed, such as Class Of ’55 (1985, featuring Johnny Cash, Carl Perkins, and Jerry Lee Lewis),  Traveling Wilburys, Vol. 1 (1988), and Roy’s own Mystery Girl (1989, now seeing a 25-year anniversary reissue).  Although Black and White Night didn’t see a commercial release until nearly a year after Orbison’s death, it’s the best testament to both his fans’ (famous and otherwise) undying loyalty and also Roy’s own feelings at being loved.  If you’re going to go, go out with a bang, and that’s exactly the way Roy Orbison left us.  If only all musicians had such an opportunity to relive and reinvent their careers before calling it a day.  Black and White Night thus serves as a perfect celebration of the works of one of America’s best pop songwriters, in that it’s not only a deep bow to the past, but a sweeping aside of the stage curtain for a legend with a few more songs left to sing to his audience before saying “Goodnight.”