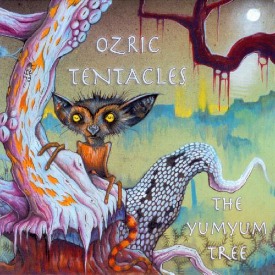 I have a great love for the band Ozric Tentacles and have followed their exploits for close to 20 years.  Forming in 1984 in Somerset, England, and naming themselves after a fictitious breakfast cereal, the Ozrics have also been closely followed by the British neo-hippie Crusty movement.  Champions of the U.K. festival circuit, the Ozrics have not found the same love in America, except from those like me who were lucky enough to see them live.  The band is fronted by guitarist/keyboardist Ed Wynne and approached the recording of their latest record, The Yumyum Tree as a foursome with Ed’s wife Brandi on synthesizer, bassist Vinny Shillito and drummer Roy Brosh rounding out Ed’s sound.  The Yumyum Tree is not drastically different in its sound than the Ozric’s first recordings, still a hodgepodge of spacey, instrumental prog rock with hints of jazz and a significant electronica influence.  The main lure of the Ozric Tentacles experience is found in Ed’s brilliant guitar playing and synthesizer programming.  Washes of processed strings purr into and around echoing alien and mechanical computer textures, while the rhythm section deftly navigates complicated and danceable time signatures.  The rush of sonics is conducive to the psychedelic atmosphere surrounding the band and its entourage.  Ed Wynne could easily craft a score for any sci-fi series or film, and his songs have been used successfully in television commercials.  Yet, it’s clear that such work would cut into Ed’s alternative lifestyle and possibly ruin the source of so many perfect musical ideas.

One complaint leveled against Ozric Tentacles is related to their tendency to stick to the same formula for many of their songs.  Synthesizers burbling and swooshing are the ever-present set-up for a dynamic guitar solo from Ed.  Propulsive bass lines and clever kit percussion are also the calling cards of the band.  To fully enjoy the genius of the Ozrics, it’s necessary to focus on the nuances of each song.  That’s the task casual listeners won’t undertake and it’s the reason why Ozric Tentacles isn’t better known to fickle American fans of the quick cut and the soundbite.  Further, songs are typically named with a nonsensical, cosmic pseudo-language.  The fact that this album is named from someone else’s mythological syllables (Lewis Carroll’s “Jabberwocky” as the source) is a bit unusual for the Ozrics.  The song titles aren’t quite as wiggy this time around either.  The nearly 8-minute “Mooncalf,” with its faux dub reggae breakdown and astral synth surges, is classic Ozric and one of the centerpieces of the collection.  Oddly named, true, but not nearly as odd as we’ve seen in the past.

Some other highlights of The Yumyum Tree are found on “Oolong Oolong.”  Shillito and Brosh are the glue on this piece, holding down a complex rhythm when not letting Ed and Brandi apply their magicks to the computer keyboard.  The record’s title track, stretching out over nine minutes, creeps out of the ooze of “Oolong” with a skittering smatter of programmed and live percussion before launching its expedition deeper into the unearthly forest.  Ed’s percussive guitar line augments the darkly tropical feel brought by the propulsive bass and tinkling xylophone.  While we’re feeling that we’ve gone off to explore the nether reaches of some dripping, extraterrestrial jungle, the band launches promptly into “Plant Music” for an electric evocation of life unknown to this or any other world.  Again Shillito is the key to laying down the lines that Ed and Brandi will build upon.  With “Nakuru,” we’ve exited the forest to a clearing where temple monks reflect upon their path to peace.  The synthesizers are approximating an Eastern drone while Brosh is having fun setting tone rather than rhythm.

The Yumyum Tree is a welcome addition to the Ozric catalog and as spectacular a trip as they’ve ever embarked on with their other releases.  I’ve been smitten with this band’s sound for quite some time and it defies logic that they’ve not yet been embraced by the masses.  Too weird?  No lyrics?  Entrenched in the counter culture?  Maybe all of the above have contributed to this situation.  I’ll continue to check out the works of Ed Wynne and company as if they’re my own private garden, revealing the secret only to those who can appreciate Ed’s unconventional botany.