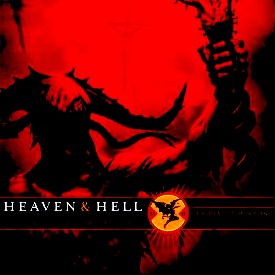 In many ways, though this may be taken as sacrilege, Black Sabbath fronted by Ronnie James Dio was an outfit responsible for far superior and consistent material than the one fronted by Ozzy Osbourne.  I understand that Sabbath back in the 1970s was fueled by a desire to shock and an unending flow of chemical enhancement, but in drafting the former Rainbow vocalist, and shifting the lyrical invention away from bassist Geezer Butler and over to the man who would actually be singing the words, Butler and guitarist Tony Iommi were freed to craft some of the most enormous and dark riffs known to recorded music.  Black Sabbath can never again feature a vocalist other than Osbourne due to legal boundaries set by Ozzy’s management (wife).  Fair enough!  As Dio, Butler, Iommi and drummer Vinnie Appice reunite, it seems it’s not simply a necessity but actually more fitting to name the band something other than “Black Sabbath.”  Thus, named after the first Sabbath album featuring Dio, Heaven & Hell have released their first full-length, The Devil You Know on Rhino Records.

Years have passed since the last full album by this combo. 1992’s Dehumanizer marked a return of Dio and Appice to the Sabbath fold, but the record lacked the punch delivered by Heaven and Hell and The Mob Rules or even Live Evil.  The reunion feels more natural and inspired on The Devil You Know.  Iommi and Butler’s riffs sound like mad experiments that have been locked away in a laboratory until now, while Dio’s lyrics convey emotions other than those found on any Rainbow, Dio or Sabbath records.  All the while, the music is powerful, classic and majestic.  Dio’s presence is accompanied by all the theatrics that we’ve known him for

The rocket to our doom blasts off on “Atom And Evil,” a conversation on the threat of nuclear annihilation as a result of mankind’s quest to master science in the name of peace.  This is not a hippy-dippy warning a la “War Pigs” or “Children Of The Grave,” but more of an in-your-face vibe confronting the darkest side of humanity.  Dio’s spider-and-fly imagery is far more wicked than the creep factor exhibited through a tableau of military men likened to porcine Lords of Hell.  Devil You Know is also rife with Dio’s religious symbolism with a twist.  The best example of this is on “Bible Black,” beginning with beautiful solo acoustic guitar overlain with electric fills from Iommi that soon descends into crushing cacophony as the song’s protagonist is drawn deeper into the spell of a fearsome tome.  The book is symbolic of addiction to the antithesis of goodness (use your own vice in place of the Bible Black and you’ll get what Reverend Ronnie is preaching about).

“Double The Pain” shifts gears slightly to a more driving rhythm from Appice as Dio wallows in a “kick him when he’s down” moment.  The band is in fine form, especially Butler on some inspired solo bass lines.  The lyrics take a similar direction on “Turn Of The Screw”— the subject is built up only to be brought down hard, all completely by design of shadowy kingmakers.  The downtrodden rise up to confront their enemies on “Eating The Cannibals,” however.  Fittingly the song is clipping along at a “Neon Knights” pace, while a thirst for revenge is being slaked.

The challenge set before Iommi and Butler on The Devil You Know forces them to remain true to the Sabbath legacy, with which they’re associated, while staying informed by modern metal approaches and freeing themselves from formulaic repetition.  This is a challenge that they’ve almost always risen to and they’ve succeeded once again on this record.  All the classic elements of the Sabbath sound from the past 30 years are present.  Their ability to pull off this trick with nearly all of their recordings is what has kept them from falling into has-been territory.  Forty years after their debut release, this band is much more direct, more talented, and even more fun.  What’s in a name?  Black Sabbath is the then, while Heaven & Hell is the now.  And evil is much better now than it used to be.