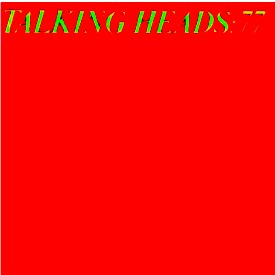 I’ve recently been able to fill a gaping hole in my collection courtesy of Rhino Records and their 180-gram vinyl reissue series.  Although I had acquired the majority of the Talking Heads’ records over the years, their debut, Talking Heads: 77 was not something I had been exposed to until now.  How wrong I have been for letting this slide.

Coming fully formed with the quirky delivery I had associated with More Songs About Buildings And Food, Fear Of Music, and Remain In Light, Talking Heads: 77 exhibits a band that had a unique vision with few obvious influences and even fewer copycats.  Lumped in with punk music due to the lack of touchstones and the frequency of appearances alongside fellow New York scenes-ters, the Heads’ first record, while being an extremely influential release among college and alternative musicians, presented nothing that could be characterized as a traditional punk sound.  Comparisons may exist between the Heads and Television, but the Heads lacked the virtuoso guitarists found in Television and made up for it with the stellar rhythm section of drummer Chris Frantz and bassist Tina Weymouth.  Their sound was rounded out by keyboardist and occasional guitarist Jerry Harrison and one of the most bizarrely dynamic frontmen in all of rock history, David Byrne.

Side one introduced us to the band by way of “Uh-oh, Love Comes To Town,” a sarcastic back-slap at those who think they’ve mastered the art of interpersonal communication and the romantic rewards that may follow.  Byrne never belabors his point, but leaves us with more to ponder than before the needle touched the grooves.  Accompanying his non-rhyming, borderline lunatic poetry is a bass line that won’t quit and a brief steel drum solo.  Another high point on side one is “Who Is It?” featuring Byrne’s dangerously misplaced falsetto and short bursts of rapid fire syllables.  “Who Is It?” is as close as Byrne gets to writing a love song.  Despite its brevity, the simple lines still leave us with a feeling of uncertainty as it closes.  The song ends but is picked back up by “No Compassion” which sounds more like a continuation of the thoughts triggered by “Who Is It?”  The songs play off of one another thematically, almost as if the frustration and helplessness of the former song contributes directly to the lack of caring expressed in the latter.  This is sequencing at its best and serves as the perfect framework for the psychological polarity thrust upon us through Byrne’s lyrics.

Side two is a better showcase for Byrne’s unusual guitar style and a continuation of his optimistic yet paranoid viewpoint.  “The Book I Read” features rather unusual chord choices and lead lines.  It’s another love song…of sorts…where “the book” is symbolic of an emotion produced through a physical relationship.  “First Week/Last Week…Carefree” seems to be a tale of a businessman lost in the shuffle of appointments, deals and reports.  The protagonist is occasionally shocked out of his pursuits by names and voices, but we never do discover exactly what it all means or where he’s heading.  Their early trademark, “Psycho Killer,” follows.  With its alternation between English and French lyrics, its descriptions of exhaustion and drive, and its palpable sense of mental disturbance, the song managed to be simultaneously catchy and highbrow.  Byrne’s guitar only enhances the disturbing feelings hinted at in the lyrics as he bashes and bends notes rather than playing a solo.

Talking Heads: 77 ends without us really knowing what to make of the band and their record.  It’s too intelligent to be a joke and it’s too fun to be serious.  There’s no way to fit it into the mold of “We’re mad and we’re not gonna take it anymore” when it’s screaming “I’m mad as a hatter and I just can’t take it anymore.”  Talking Heads: 77 is then an examination of the collapse of society taken one person at a time without any broad, sweeping statements meant to describe everyone at once.  The pressure had been building and it blew out the top on this record.  Future releases by the band would allow producer Brian Eno to coax even more of this sentiment from Byrne, while allowing the musicians to explore polyrhythms and Caribbean flavors.  But this release, before Eno’s inclusion, showed how artistic expression could also come through rock music.  Where Genesis’ brand of art rock seemed to need a gallery showing, the Talking Heads would have been more comfortably displayed on a flyer taped-up at the bus station.  Both media can convey emotion, inspire deeper thought, and reveal complex layers of meaning, but the Talking Heads put it right out there on the street level for everyone to enjoy.  So there’s the brilliance — music that doesn’t seem to be about everybody yet is really all about all of us that’s presented in way that’s unique to everyone yet welcoming to each listener.  Tough stuff to do, yet mastered by the band early on with Talking Heads: 77.