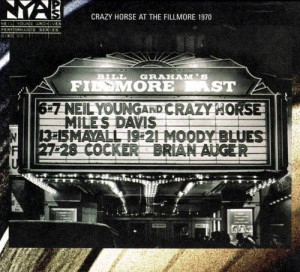 What material still lies in Neil Young’s vaults may never be known, except by Young himself.  When he does finally make the effort to release some of the recordings, it can sometimes accelerate the frustrations of his fans, creating more questions than answers.  To dodge these head-scratching moments, we’re best off focusing on what’s included in the package than lamenting that the release should have been in a different format, or should have included this or that missing song.  Fitting right into Young’s puzzling reissue scheme is Live At The Fillmore East, a 2006 release on  Reprise Records documenting a highlight of Young and Crazy Horse’s 1969-1970 tour supporting Everybody Knows This Is Nowhere, the combo’s debut.  Although the tapes are savaged by the wear of time itself, Young did rescue enough material from a two night stint on March 6 and 7 at Bill Graham’s legendary venue to hold us over for a bit.  Again, we’re accentuating the positive here, which is very easy to do, and not bitching to Neil that high quality digital recordings of Crazy Horse do not exist in abundance.  Some things just can’t be helped; why blame the artist?

So we’re treated to six songs, which will always leave us wanting more, but are still enough to prove why we want more in the first place.  The original incarnation of Crazy Horse was incredible and cannot be duplicated.  The wounds from the tragedy of guitarist/vocalist Danny Whitten’s death, coming not long after these dates were played, were surely opened once more when Young supervised Fillmore East’s release.  I don’t know how he, like the listener, wouldn’t be moved by hearing the rare chemistry shared by Young and Whitten trading licks and sharing harmonies.  Something just clicked with this combo and, in some ways, Young’s been trying to recapture this magic ever since Whitten left us.

How to describe Danny Whitten’s music and contribution to Crazy Horse has been attempted by so many writers before me, but none of us will quite get it right.  I thought long and hard about how to describe Whitten’s voice to someone that hadn’t heard it before and was really stumped.  I don’t mean this as an insult to either artist, but he really reminds me of Cat Stevens, if Cat had grown up in the rural Southern U.S.  There’s a nasal beauty and wide-mouthed fullness to the sound of Whitten’s voice that liberally digs deep for the country twang which perfectly echoes and rounds out Neil Young’s voice.  Whitten’s guitar playing, while falling shy of Young’s abilities, again brilliantly complements what Young delivers.  You’ve heard it said by many a lead guitarist, from Jerry Garcia, to Metallica’s Kirk Hammett, to Eric Clapton, the key to being able to solo unrestrained is in having a solid bedrock of sound put in place by your rhythm guitarist.  Fillmore East is Exhibit A in support of this notion.

If you get what Neil Young is trying to do when he plays with Crazy Horse, and this is important because not everyone understands this, then you know that he’s attempting to perfect a ramshackle groove – to stay rough around the edges…and do it without fail on each take.  The key to the success lies not with Neil, but with Crazy Horse’s rhythm section, drummer Ralph Molina, and bassist Billy Talbot.  They’re joined on this tour by longtime Young collaborator, Jack Nitzsche, on electric piano, but his input into the sound is not fully established.  Although he’d work with Young in the future, he was never considered a member of Crazy Horse again following this tour.

With all the elements of the performance described, let’s take a closer listen to the material.  The country shuffle title track, “Everybody Knows This Is Nowhere,” introduces us to the band and showcases the Whitten/Young guitar and vocal interplay.  Whitten had a beautiful falsetto, as does Young, so there’s no issues when they decorate their songs with Beach Boys-style high harmonies even in a live setting.  Rolling on into “Winterlong,” an outtake which would only see a studio version released on Young’s Decade collection years later, we hear that the band had quite a bit of material rehearsed that was held in reserve and not intended for studio recordings.

One of two lengthy jams on Fillmore East, “Down By The River,” stretching over nearly 12 and a half minutes, puts the studio version on Nowhere to shame, and demonstrates how any good artist’s material will only improve through continued live performance.  Several months after recording Nowhere, the band knew “Down By The River” inside and out and could probably have blown the studio version away when playing in their sleep!  Both Young’s and Whitten’s guitars have an aggressive edge that only heightens the already edgy lyrics dealing with murder and love gone wrong.

A moment that’ll make hardcore Young fans smile is found on “Wonderin’”, presented here as a barroom weeper, rather than the twisted doo-wop version which Young released on Everybody’s Rockin’ over a decade later.  In comparison, this is the stronger arrangement, but it hinges on Whitten’s vocal counter-melody, proving why Young needed to resurrect the tune in a different configuration with Whitten long gone.  Another song which really requires Whitten’s playing to show the purest version is his own composition, “Come On Baby Let’s Go Downtown.”  Here Whitten sings lead with a remarkable hillbilly quaver, while Young backs him with sweet vocal harmonies and wicked guitar fills.  It’s weird product from a conference of Southern Californians and a Canadian, but that’s also what helps make it so engrossing.

The CD’s closing jam is the always incredible “Cowgirl In The Sand,” which ramps up over 16 minutes and provides any aspiring musicians in the crowd with instruction on how to keep an audience’s attention occupied by steering clear of wankery and crafting a song in the same way as a novel – with beginning, middle, and end.  The middle is the jam, of course, but jams are only successful when inserted into the framework of a coherent start and finish to the piece.

So, quit your crying, Neil Young fans, and be thankful that we’re at least getting to hear some of these recordings.  Neil knows what sounds like crap and also what stuff he’s proud to put his name on.  He’s a perfectionist with complete control over his archived recordings.  I trust him to release only the best, and, while he’s still among the living, it’s his call to make.  Although Fillmore does not include a complete night’s set, nor does it include the acoustic set with which Young opened his shows, nor does it include a version of Nowhere’s best-known song, “Cinnamon Girl,” it’s still the most complete document we have of the genius power held by Crazy Horse when they first put their music out there for the world to hear.