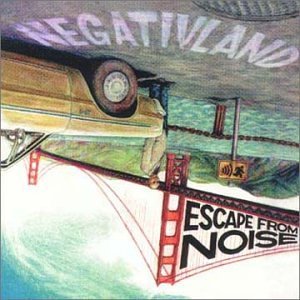 Long weekends mean extra time to dig through the stacks of dusty vinyl and teetering CD columns here at Chez Polzin.  I’ve unearthed an LP that seriously blew my mind and the minds of my fellow volunteer DJs at our local college radio station some 26 years ago (yes, my peeps, it’s really been that long).  While including a review of this record on our website is certainly pushing the boundaries of what we call “Classic Rock,” that’s because it’s rather hard to call the contents “rock music.”  That Negativland’s Escape From Noise is a classic recording is indisputable.

Negativland began in Northern California in 1979 while members Richard Lyons (singing, lyrics, voice) and Mark Hosler (just about anything else, musical and non-musical, that makes noise) were still in high school.  Over the next eight years, the duo expanded their lineup to include Don Joyce (all the other stuff that Hosler wasn’t using to make noise), Chris Grigg (mainly drums, but also early computer software and even field recordings), and David Wills (invented instruments, and other noisemakers overlooked by Hosler and Joyce).  The combo had a big love of the German ensemble Neu!, taking not only the band’s name and also the name of their record label, Seeland, from that group, but also stealing their esthetic.  What followed were a series of recordings on the Seeland label that were only marginally musical, but incredibly inventive and thought-provoking.  And then came Escape From Noise.

Any college radio station worth its salt was all over the venerable indie label SST Records.  Aside from being the label that unleashed Black Flag, The Minutemen, Meat Puppets and Hüsker Dü on the masses, SST was now home to Dinosaur Jr., Sonic Youth, Bad Brains (and soon to be home for fIREHOSE, Screaming Trees and Descendents).  In 1987, SST was white-hot!!  The label began to experiment by releasing jazz-related recordings, very off-kilter pop, and other detritus avoided by the majors.  Falling in line with these experiments was the new record from Negativland.  We couldn’t have been less prepared.

Escape From Noise is a rough concept album which documents the sources of the noises that we’d all like to escape from, not the actual ways to make the escape.  Humor permeates the album, but it’s not strictly a comedy record.  Guest stars are abundant, so much so that I originally questioned whether all of these guests had actually contributed, or whether Negativland was just messing with us.  I now feel that the truth lies somewhere in-between – some of the “famous” musicians’ contributions were not made with the intention of collaborating on anything specific.  Negativland merely had tapes rolling and then added pieces of the recordings to other material created by the group (mostly true for noises).  Yet some of the music was created by “famous” people with the specific purpose of broadening the sound beds beneath the tracks (generally this is true with more traditional musical performances, not with noises).  The laundry list of contributors includes Dead Kennedys vocalist Jello Biafra, producer/engineer Steve Fisk, former Henry Cow guitarist, Fred Frith, Grateful Dead members Jerry Garcia and Mickey Hart, Einsturzende Neubauten’s Alexander Hacke, guitarist/composer Henry Kaiser, Devo’s Mark Mothersbaugh, The Residents, and even The Church Of The SubGenius leader Reverend Ivan Stang.  Yes, really.

What ends up on Escape From Noise are a series of (mostly) two to three minute tracks that feel like small plays or films which border on the edge of unreality.  It’s rather difficult to document all of the outstanding moments on the album in the space I’ve allotted here, but let’s shine some light on a few of them.  One track illustrative of the paths taken by Negativland to detail noise is found on a cut called “Michael Jackson.”  Now, remember, Thriller had been released just a few years before Noise, so the late Mr. Jackson was well known by everyone on the planet.  As the track begins, we hear a girl and a young Jackson discussing the fact that he’d just got dirt all over her new dress while buzzing around her on his bike (if someone can find the source material for this, I’d love to know the details).  After she yells out “Michael Jackson!”, things get dark quickly.  A character coming across as some sort of techno-priest begins listing all of the top pop performers of the day, starting with Jackson.  After the list, he names their crimes against humanity and the judgment that has been brought on them for those crimes (all to spooky backing music from Fisk and Frith).  Then things get even weirder.

How about the brief tale of the man who can’t enjoy the content delivered by The Playboy Channel because of all the distracting noise around him?  The musical backing here is courtesy of Mothersbaugh and a variety of instruments.  He’s ably assisted by Biafra, “playing” a flushing toilet.  Then there’s the story of “Sycamore,” a planned community whose members are plagued by the presence of firearms.  Gunfire punctuates the proceedings.

Side 1 ends with perhaps the album’s best cut, “Car Bomb,” a two-minute, rapid-fire, lunatic rant chronicle of nearly every part of the automobile, including a bumper sticker that says “Car Bomb.”  Said sticker was included in vinyl editions of the album released through SST, and I still own that unmolested sticker!  Expect explosions galore to interrupt the rundown of the auto parts.  Another uneasy moment is heard during “Backstage Pass,” where Jerry Garcia describes San Francisco from an outsider’s point of view, while Mickey Hart provides percussion and “processed animals.”  This is easily the most obscure appearance of Garcia and Hart in the history of recorded music.

Fans of Escape From Noise will also remember “Time Zones” (explaining the vastness of the Soviet Union in comparison to the land mass of the United States), “Christianity Is Stupid” (where a born again preacher takes the point of view of his religion’s detractors during a bitter sermon), “Nesbitt’s Lime Soda Song” (an odd folk song about how stinging insects and sweet confections don’t mix), and “Over The Hiccups” (where a little girl sings the Judy Garland classic to cute and hilarious results).  The brilliance of Negativland is best revealed during this record, though the combo continues making unsettling and highly original recordings to this day.  Longtime fans of the group will encourage you to purchase Noise through Seeland Records, though it’s also still in print on SST.  An ugly bout of legal ensnarement occurred shortly after Noise’s release, which set SST and Negativland at odds and left SST looking less than heroic.

When you need a break from all the classic rock you’re listening to, track down Escape From Noise.  You won’t be disappointed.  Then you, Negativland, and a sampled Grinch can ask the question together: “Is there any escape from all the noise, noise, noise?”